A pair of reports this week from the Pentagon have sounded alarm bells for Washington, D.C., over China’s use of its ever-growing military, trade, and infrastructure networks, which they assert are being used to pursue a goal of global domination and direct confrontation with American interests around the world. END_OF_DOCUMENT_TOKEN_TO_BE_REPLACED

Fifty miles east of Cairo, a Chinese construction firm is giving the aged, crowded, increasingly decaying “mother of the world” a face-lift of sorts. China State Construction and Engineering Company (CSCEC) has broken ground on a new business and administrative district to the tune of $3 billion, mostly financed by Chinese banks. When completed by late 2019, according to projections, much of Egypt’s government will move to this new “capital.” END_OF_DOCUMENT_TOKEN_TO_BE_REPLACED

That shift in alliances did not cause World War i. But it was a symptom of some of the other long-term causes. END_OF_DOCUMENT_TOKEN_TO_BE_REPLACED

That’s how Ralph Jennings opened his piece for Forbes on Wednesday. Humor aside, the point he’s making is the same one I made at the end of September — that China’s upcoming National Congress is a really big deal. China sets the regional tone on nearly all matters, as Jennings points out in his article:

“Chinese foreign and economic policies shape much of Asia. China’s ever-growing efforts to build and fund infrastructure around the subcontinent through initiatives such as One Belt, One Road have obvious impact on smaller countries that might otherwise struggle to finance their own projects. Neighbors from Japan to India are watching China for foreign policy cues that affect their iffy diplomatic relations with the region’s major power.”

END_OF_DOCUMENT_TOKEN_TO_BE_REPLACED

Where do these forecasts come from? END_OF_DOCUMENT_TOKEN_TO_BE_REPLACED

The Belt and Road Initiative is the vanguard for Beijing’s reach for global power. It may not work, given all the imponderables of a project on this scale, not to mention conflicting interests with nations along its route. But at least the Chinese are showing the kind of social energy necessary to achieve great things. Do Americans still have that trait?

The state-owned press in China was all aglow about President Xi Jinping’s address to the G20 summit in Hamburg, Germany. Xinhua proclaimed how “Many overseas experts and scholars have praised” it. Towards the end of his remarks, President Xi brought up his pet project; recreating the ancient Silk Road that once linked Imperial China to Europe through Central Asia and the Middle East. He proclaimed, “Commitment of the Belt and Road Forum is highly compatible with the goal of the G20” and should be seen as part of a “new and inclusive globalization.” The Belt and Road Forum for International Cooperation had been held in Beijing, May 14-15. It attracted 29 heads of state (including Russian President Vladimir Putin) and representatives of 130 other countries (including the U.S.), plus the leaders of 70 international organizations, including UN Secretary-General António Guterres. END_OF_DOCUMENT_TOKEN_TO_BE_REPLACED China has begun construction of the first Type 075 Landing Helicopter Dock (LHD) at the Shanghai based Hudong Zhonghua Shipbuilding Company. Construction most likely started in January or February of this year, with some satellite imagery and digital photos appearing online of at least one pre-fabricated hull cell. The Type 075 will be the largest amphibious warfare vessel in the Peoples’ Liberation Army Navy (PLAN), with similar displacement and dimensions as the U.S. Navy Wasp Class LHD. The PLA has also made it known through non-official channels that the force plans to expand the current PLA Marine Corps from 20,000 personnel to 100,000. As China completes preparations for its new military base in Djibouti, located in the strategic Horn of Africa, it has also continued its substantial investment in developing the port of Gwadar, Pakistan. Not only will Gwadar become a key logistics hub as part of the China-Pakistan Economic Corridor (CPEC) and the “One Belt, One Road” trade initiative, but will also be a key naval base in providing security for China’s maritime trade in the region. END_OF_DOCUMENT_TOKEN_TO_BE_REPLACED

END_OF_DOCUMENT_TOKEN_TO_BE_REPLACED 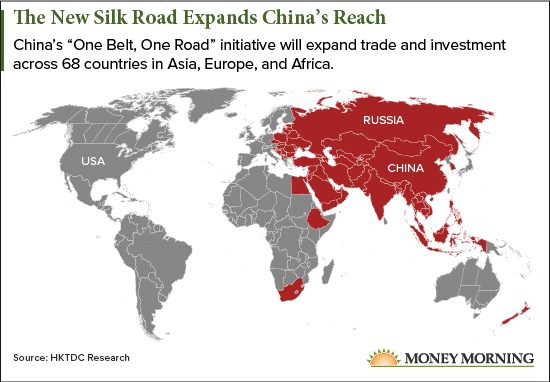 China could invest over $5 trillion into building its Belt and Road initiative over the next 10 years. That could mean a near 50% profit windfall for investors who know where to look… END_OF_DOCUMENT_TOKEN_TO_BE_REPLACED

On May 14-15, the People’s Republic of China (PRC) hosted the Belt and Road Forum for International Cooperation. The Beijing meeting attracted 29 heads of state (including Russian President Vladimir Putin) and representatives of 130 other countries (including the U.S.), plus the leaders of 70 international organizations, including UN Secretary-General António Guterres.

Chinese President Xi Jinping gave the keynote address heralding the “One Belt, One Road” initiative (BRI) as a top priority. And well it should be, given that its goal is nothing less than to establish Chinese preeminence (even hegemony) over Eurasia and Africa. END_OF_DOCUMENT_TOKEN_TO_BE_REPLACED

The confrontation between U.S. President Donald Trump and North Korean (DPRK) leader Kim Jong-Un is very much just between those two leaders, with the People’s Republic of China somewhat marginalized. Beijing is now fighting to find a path into this equation. END_OF_DOCUMENT_TOKEN_TO_BE_REPLACED

What is “One Belt, One Road?” END_OF_DOCUMENT_TOKEN_TO_BE_REPLACED