The United States has warned Germany that intelligence sharing between the two countries will be threatened if the Chinese telecommunications giant Huawei is awarded a contract to build Germany’s 5G network. The company, Huawei Technologies, is a private Chinese venture and one of the world’s leading telecommunications hardware manufacturers. In recent years, however, it has come under scrutiny by some Western intelligence agencies, who view it as being too close to the Communist Party of China. More recently, Washington has intensified an international campaign to limit Huawei’s ability to build the infrastructure for 5G, the world’s next-generation wireless network. Along with Britain, Australia and Canada, the US is concerned that the Chinese telecommunications giant may facilitate global wiretapping on behalf of Beijing’s spy agencies. END_OF_DOCUMENT_TOKEN_TO_BE_REPLACED

“Activity is evident at the vertical engine test stand and the launch pad’s rail-mounted rocket transfer structure,” according to the Beyond Parallel website. “This facility had been dormant since August 2018, indicating the current activity is deliberate and purposeful.” END_OF_DOCUMENT_TOKEN_TO_BE_REPLACED

A report by the now-defunct Commission to Assess the Threat to the United States from EMP Attack, for the first time reveals details on how nuclear EMP weapons are integrated into the military doctrines of China, Russia, North Korea, and Iran. END_OF_DOCUMENT_TOKEN_TO_BE_REPLACED

People take pictures of the first freight train from Shenzhen to Minsk, capital of Belarus, that set out of Yantian Port in Shenzhen in May 2017. Photo: Reuters / stringer

Russia’s embrace of the Far East and other parts of Asia is proceeding with a symbiotic embrace of China’s New Silk Roads, or Belt and Road Initiative

The concept of Greater Eurasia has been discussed at the highest levels of Russian academia and policy-making for some time. This week the policy was presented at the Council of Ministers and looks set to be enshrined, without fanfare, as the main guideline of Russian foreign policy for the foreseeable future.

President Putin is unconditionally engaged to make it a success. Already at the St Petersburg International Economic Forum in 2016, Putin referred to an emerging “Eurasian partnership” END_OF_DOCUMENT_TOKEN_TO_BE_REPLACED

Those appealing for more civility and a return to polite discourse can save their breath. It’s much, much too late for that. END_OF_DOCUMENT_TOKEN_TO_BE_REPLACED

Early last month, South Korea opened a liaison office with North Korea despite U.S. opposition to the move. Shortly after, South Korean Foreign Minister Kang Kyung-wha publicly criticized the U.S. for its inflexibility regarding an action of good faith that North Korea had asked of the U.S. Also in September, South Korea announced that it might remove a certain set of sanctions on the North, prompting U.S. President Donald Trump to say the South does “nothing without our approval,” a statement that irritated many South Koreans. END_OF_DOCUMENT_TOKEN_TO_BE_REPLACED

Given that the Soviet Union was much stronger than China at the time, Kissinger especially courted Beijing. END_OF_DOCUMENT_TOKEN_TO_BE_REPLACED

Interpol President Meng Hongwei walks toward the stage to address the Interpol World Congress in Singapore on July 4, 2017. /AP

China said on Sunday it was investigating Meng Hongwei for suspected wrongdoing after the head of the global law enforcement organization Interpol and Chinese vice minister for security was reported missing in France.

The statement by a Chinese anti-graft body was the first official word from China about Meng since his disappearance was reported in France on Friday. Meng had been reported missing by his wife after travelling last month from France, where Interpol is based, to China. END_OF_DOCUMENT_TOKEN_TO_BE_REPLACED

The United States—which is pushing to have all Iranian oil customers stop importing crude from Tehran—is looking for alternative oil supplies for its allies whose imports will be disrupted by the U.S. sanctions on Iran, the Financial Times reported on Thursday, citing a senior U.S. administration  official. END_OF_DOCUMENT_TOKEN_TO_BE_REPLACED 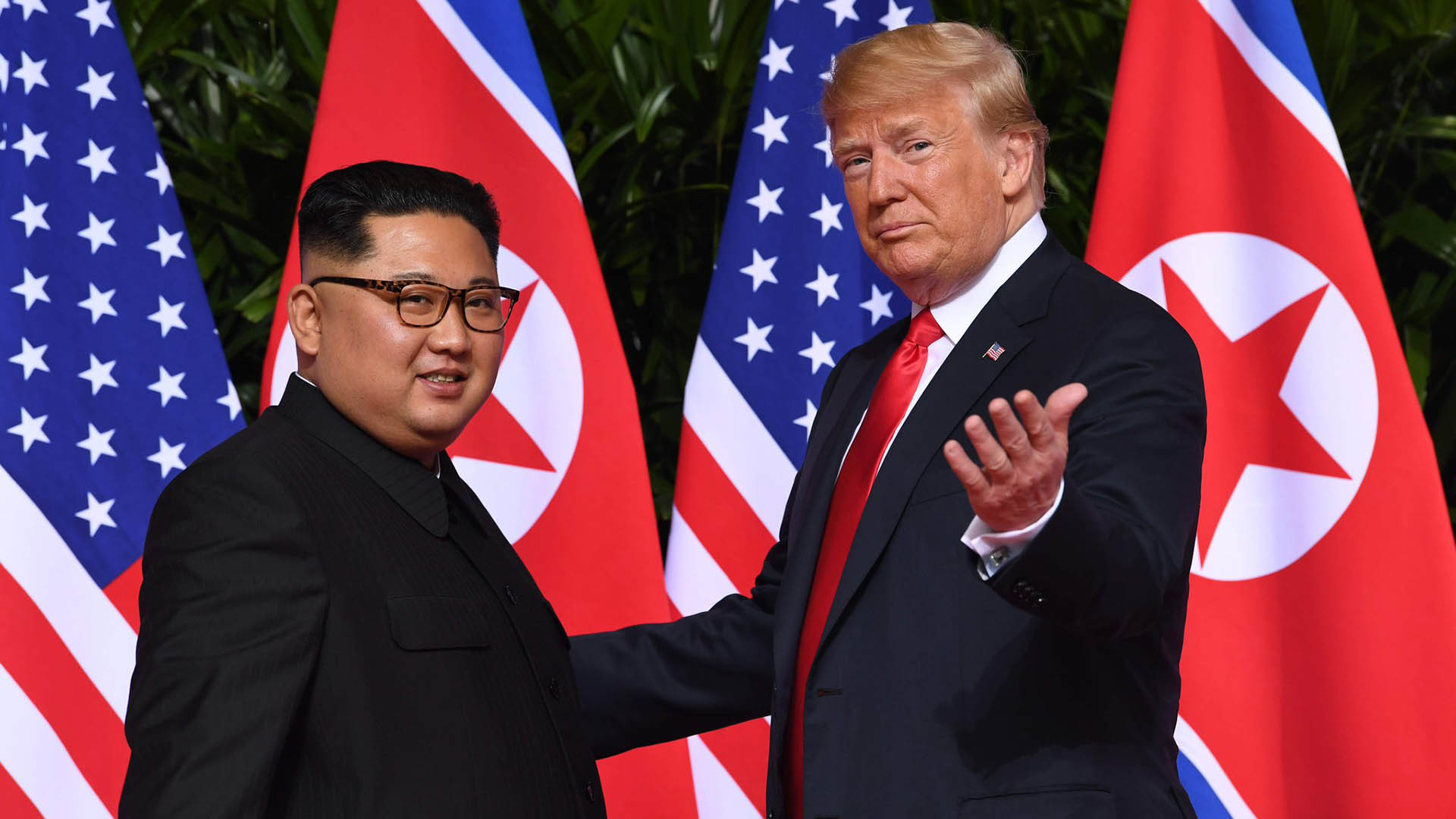 Proclaiming his ‘unwavering faith’ in President Donald Trump, North Korean dictator Chairman Kim Jong-un has set the date for a third meeting with South Korean President Moon Jae-in, as well as a timeline for denuclearization. END_OF_DOCUMENT_TOKEN_TO_BE_REPLACED

Improved power train will give Chinese jet ability to fly undetected at supersonic speeds, on par with United States’ F-35

A new and improved engine designed to make China’s J-20 stealth fighter a world-class combat jet should be ready for mass production by the end of the year, military sources have said.

The WS-15 engine features cutting-edge single-crystal turbine blades and has been in development for several years, but Chinese technicians have struggled to get it into mass production. END_OF_DOCUMENT_TOKEN_TO_BE_REPLACED The hermit state appears to be continuing to take down its key intercontinental ballistic missile facilities (ICBM) at Sohae, located at about 200km (120 miles) northwest of the capital Pyongyang, according to the North Korea monitoring group 38 North on late Tuesday. END_OF_DOCUMENT_TOKEN_TO_BE_REPLACED

Authoritative, US-based website 38 North, which boasts a specialized focus on satellite data analysis of North Korea, announced the findings early on Tuesday, complete with photographs of the site, known as the Sohae Satellite Launching Station. END_OF_DOCUMENT_TOKEN_TO_BE_REPLACED

In 1991, after the Soviet Union collapsed, the United States gained unchallenged supremacy in the world. Indeed, just three years later, the U.S. alone accounted for about 25 percent of global GDP and 40 percent of world military spending, while Washington’s treaty allies in Europe and the Asia Pacific boasted roughly another 47 and 35 percent, respectively. Potential adversaries, meanwhile, were weak and overmatched: Russia was reeling from the Soviet implosion; China did not have the economic or military weight to compete; Iran was still recovering from its calamitous war with Iraq. In this environment, the U.S. could act with impunity. Democracy was expanding across the globe; the long shadow of communist authoritarianism had disappeared. It was the end of history as we knew it. Or so many thought.

That post-Cold War era has now passed. What comes next is still taking shape, but one thing is clear: America’s relative dominance is declining. U.S. shares of global GDP and defense spending are, while formidable, not what they once were; the same goes for Washington’s core treaty allies. More importantly, the U.S. and its Western allies have been reluctant to use their still-considerable power assertively. At the same time, hostile authoritarian states have pursued in earnest their long-held ambitions to dominate their own regions. These revisionist powers—Russia in Europe, China in East Asia, and Iran in the Middle East—never accepted the world order that followed the Cold War, defined by an open global economic system, international institutions, liberal political norms, and American supremacy. So Moscow, Beijing, and Tehran bided their time, gaining strength and waiting for the right time to try to overturn the order. That time has arrived, and the implications for American interests and global peace and stability are profound—and quite dangerous. END_OF_DOCUMENT_TOKEN_TO_BE_REPLACED

As said many times in the past, Japan can go nuclear within three months if it wishes. It’s already secretly working on them. The necessary materials are there and only assembly is required. All that’s needed is a catalyst.

Although it may be a farce, like the last 10-plus times it has committed to denuclearization, North Korea has slowed down the need. China at the moment is the flashpoint since it also controls North Korea, and is projecting its power throughout the Asia-Pacific and eventually into the Western Pacific.

Japan has amassed enough plutonium to make 6,000 atomic bombs as part of a programme to fuel its nuclear plants, but concern is growing that the stockpile is vulnerable to terrorists and natural disasters.

Japan has long been the world’s only non-nuclear-armed country with a programme to reprocess spent nuclear fuel from its power plants into plutonium. END_OF_DOCUMENT_TOKEN_TO_BE_REPLACED