Fifty miles east of Cairo, a Chinese construction firm is giving the aged, crowded, increasingly decaying “mother of the world” a face-lift of sorts. China State Construction and Engineering Company (CSCEC) has broken ground on a new business and administrative district to the tune of $3 billion, mostly financed by Chinese banks. When completed by late 2019, according to projections, much of Egypt’s government will move to this new “capital.” END_OF_DOCUMENT_TOKEN_TO_BE_REPLACED 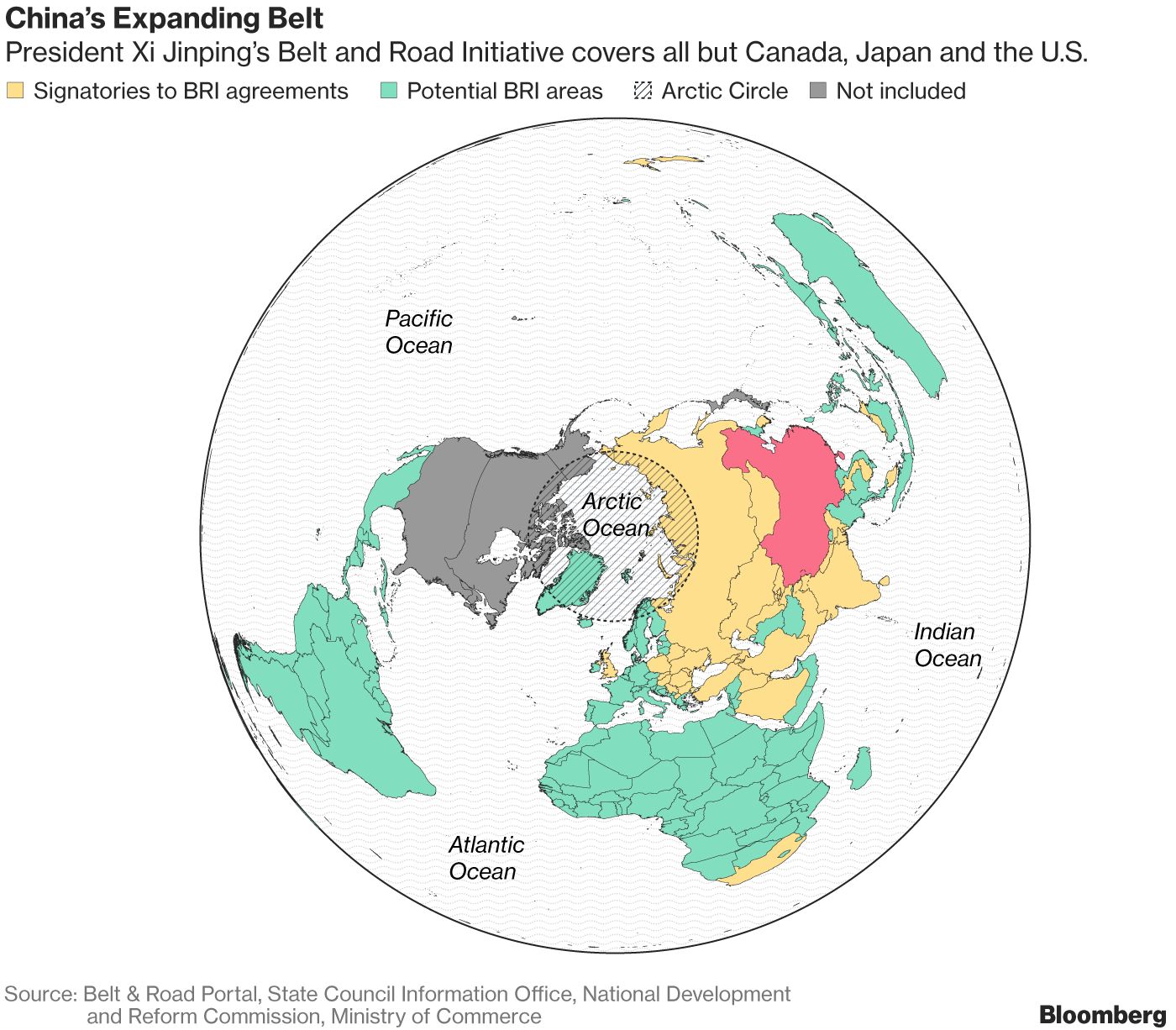 With the addition of the Arctic and Latin America last week, Chinese President Xi Jinping’s signature Belt and Road Initiative has become truly global. Only the U.S., its neighbor Canada and ally Japan have yet to be included in the plan, which seeks to build or upgrade a network of highways, railways, ports and pipelines. END_OF_DOCUMENT_TOKEN_TO_BE_REPLACED END_OF_DOCUMENT_TOKEN_TO_BE_REPLACED

The replacement for the American global hegemony is all there. The alternative global infrastructure is built and only a switch needs to be flipped on. The only questions remaining are when and how America will be replaced as a global leader.

The last thirty days have shown another kind of world that is engaging in cooperation, dialogue and diplomatic efforts to resolve important issues. The meeting of the members of the Belt and Road Initiative laid the foundations for a physical and electronic connectivity among Eurasian countries, making it the backbone of sustainable and renewable trade development based on mutual cooperation. A few weeks later, the Shanghai Cooperation Organization meeting in Astana outlined the necessary conditions for the success of the Chinese project, such as securing large areas of the Eurasian block and improving dialogue and trust among member states. The following AIIB (Asian Infrastructure Investment Bank) meeting in ROK will layout the economical necessities to finance and sustain the BRI projects.

The Shanghai Cooperation Organization (SCO) and the Chinese Belt and Road Initiative (BRI) have many common features, and in many ways seem complementary. The SCO is an organization that focuses heavily on economic, political and security issues in the region, while the BRI is a collection of infrastructure projects that incorporates three-fifths of the globe and is driven by Beijing’s economic might. In this context, the Eurasian block continues to develop the following initiatives to support both the BRI and SCO mega-projects. The Collective Security Treaty Organization (CTSO) is a Moscow-based organization focusing mainly on the fight against terrorism, while the Asian Infrastructure Investment Bank (AIIB) is a Beijing-based investment bank that is responsible for generating important funding for Beijing’s long-term initiatives along its maritime routes (ports and canals) and overland routes (road, bridges, railways, pipelines, industries, airports). The synergies between these initiatives find yet another point of convergence in the Eurasian Economic Union (EEU). Together, the SCO, BRI, CTSO, AIIB, and EEU provide a compelling indication of the direction in which humanity is headed, which is to say towards integration, cooperation and peaceful development through diplomacy. END_OF_DOCUMENT_TOKEN_TO_BE_REPLACED

Leaders of the largely symbolic body — including Russia’s Vladimir Putin and China’s Xi Jinping — formally signed off on the sub-continent duo’s accession at the annual SCO summit in Kazakhstan’s capital Astana. END_OF_DOCUMENT_TOKEN_TO_BE_REPLACED

© Photo: Ministry of Defence of the Russian Federation

Ahead of the upcoming meeting between Presidents Putin and Erdogan, which is set to start later on Friday in Moscow, political analysts from both countries have indicated certain hidden hazards which might hinder the negotiations.

Earlier on Thursday, Kremlin spokesman Dmitry Peskov said that President Putin, among others, plans to discuss the conflict settlement process in Syria and Russian Ambassador to Turkey Andrei Karlov’s assassination in talks with Erdogan. END_OF_DOCUMENT_TOKEN_TO_BE_REPLACED

It has become increasingly clear that Russia is on the inexorable path toward restoring its territory on the old map of the USSR. Whether Moscow will be able to achieve such a grandiose scheme to recreate another Soviet Union-size Rodina has been traditionally believed to depend on the strength and willingness of NATO and Europe to counter such Russian ambition. The assumption is that if the counterthrusts from the West are robust enough, Moscow will fail in its attempt, otherwise Russia’s territorial map will look like the Soviet Union in 2030.

This dichotomy of thrust and counterthrust by Russia on the one side and the West on the other is for the most part inadequate largely because there is also another crucial factor in deciding the outcome of Russia’s territorial expansion, namely, China and its own territorial ambition that goes against Russia’s objectives in much of Central and East Asia. END_OF_DOCUMENT_TOKEN_TO_BE_REPLACED

China has a changing attitude to the thornier diplomatic and security crises now afflicting the Asian continent. Depending on the amount of national interest at play and the power it can reasonably project in the relevant geopolitical chessboards, Beijing can put on the face of peace facilitator in Syria, peace broker in Afghanistan and would-be boss in the Western Pacific.

While the main driver for the Chinese diplomacy in the Middle East is the protection of economic interests, the assertion of national sovereignty, combined with the aspiration to become the driving force in East Asia, mostly explains China’s moves in the East and South China seas. The rationale for Beijing’s posturing in Central Asia is instead more nuanced. The region is in fact a crossroads for many stakeholders; here China is committed to safeguarding precious economic assets and, at the same time, exerting some form of power.

In an osmotic way, all of these three approaches are conditioned by China’s interaction with the other great powers – the United States and Russia. END_OF_DOCUMENT_TOKEN_TO_BE_REPLACED

The project is more than just a group of new transportation corridors linking China with Europe. In fact, the New Silk Road is a new model of economic partnership in Eurasia.

The initiative includes several transit corridors from western China to Europe which can be divided into three groups – the Northern Route, Sea Route, and the Southern Route. END_OF_DOCUMENT_TOKEN_TO_BE_REPLACED

Putin made his proposal at a meeting with the Belarussian and Kazakh presidents, who did not respond in public but have been lukewarm about such proposals.

END_OF_DOCUMENT_TOKEN_TO_BE_REPLACED

ASTANA, November 24. /TASS/. Around 40 states have plans to establish a free trade zone with the Eurasian Economic Union (EEU), the speaker of Russia’s lower house of parliament, the State Duma, Sergey Naryshkin, told an international conference in Kazakhstan’s capital Astana on Monday.

“Five countries of the Commonwealth of Independent States (CIS) have already made a Eurasian choice, and another 40 countries across the world have officially voiced their wish to set up a free trade zone with our integration association,” Naryshkin said. END_OF_DOCUMENT_TOKEN_TO_BE_REPLACED

At the end of September – early October, Russia and Iran will carry out joint military drills in the Caspian Sea to train maritime security-enforcement operations. Iranian military attaché to Moscow Col. Suleiman Adeli said: “Iran and Russia want Caspian states to maintain maritime security without interference of foreign states. They consider presence of foreigners a source of tensions and conflict.”

When they mention “foreign interference”, they usually keep the US in mind. Although, it is not only the US that has political, military-strategic and economic interests in the region. The EU and China have own palates. The reason why Caspian states arm themselves is terrorism, extremism, separatism and expansionism of the West. These are the new threats of the Caspian Sea. The US strategy in the Middle East remains a sensitive issue for the Caspian Sea, but the steps made in the Middle East to disrupt the balance of power by pressing on Syria may cause problems for all Caspian and Trans-Caucasus states. END_OF_DOCUMENT_TOKEN_TO_BE_REPLACED