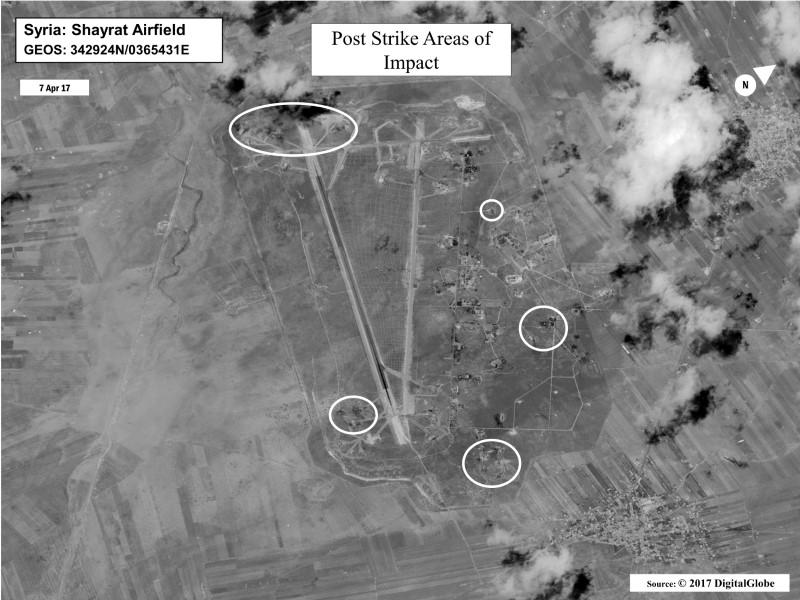 Two U.S. guided-missile destroyers fired 59 Tomahawk Land Attack Missiles in a series of strikes on a Syrian airfield believed to be the origin point of a chemical weapons strike in the northern part of the country, several military officials told USNI News on Thursday night. END_OF_DOCUMENT_TOKEN_TO_BE_REPLACED

The Pentagon said people were not targeted, and there was no immediate word on casualties. U.S. officials told NBC News that aircraft and infrastructure at the site were hit, including the runway and gas fuel pumps. END_OF_DOCUMENT_TOKEN_TO_BE_REPLACED

An interesting take that deserves attention.

Shayrat Airfield in Homs, Syria is seen in this DigitalGlobe satellite image released by the U.S. Defense Department on April 6, 2017 after announcing U.S. forces conducted a cruise missile strike against the Syrian Air Force airfield. DigitalGlobe/Courtesy U.S. Department of Defense/Handout via REUTERS

Could President Trump have struck a deal with Russia before the strikes in a play to nullify his opposition and peacefully split up Syria?

According to the Pentagon press release, Russian forces, as well as regional allies, were notified in advance of the strike using previously established deconfliction lines, and ‘precautions’ were taken to minimize risk to Russian or Syrian personnel located at the airfield.  END_OF_DOCUMENT_TOKEN_TO_BE_REPLACED

Lets not forget about the USS Donald Cook, which the Russians shut off like a simple television set and leaving it as a sitting duck in the Black Sea, using advanced electronic warfare technology. Didn’t hear that one in the news? Don’t be so shocked.

“On Jan. 25 an RC-135 aircraft flying a routine route in international airspace over the Black Sea was intercepted by a Russian Su-27 in an unsafe and unprofessional manner,” Navy Capt. Daniel Hernandez, chief spokesman for the U.S. European Command, told the Washington Free Beacon. “We are looking into the issue.”

Defense officials said the Su-27 flew alongside the RC-135, an electronic intelligence-gathering aircraft, and then performed what they said was an aggressive banking turn away from the intelligence jet.

The thrust from the Su-27 “disturbed the controllability” of the RC-135, said one official familiar with details of the incident. END_OF_DOCUMENT_TOKEN_TO_BE_REPLACED

Please see the source for the video as it has compatibility issues when posted here.

Washington (CNN) The U.S. Navy took the unusual step Monday of releasing video of a Russian Su-24 aircraft flying past the right side of the guided missile destroyer USS Ross in the Black Sea.

The video was distributed to make clear that the airplanes and ship had a routine encounter, contrary to Russian reports. It shows a warplane approaching from the distance and then quickly zooming past the American vessel. END_OF_DOCUMENT_TOKEN_TO_BE_REPLACED

For more background on the USS Donald Cook incident and how the Russians shut it down, please click HERE.

The Russian defence minister, speaking at a security summit in Singapore, said US missile ships operating near Moscow’s territorial waters “pose a danger to strategic stability” between the two countries.