A sixth-century mosaic of Saint Mark, stolen from a church after Turkey’s military invaded Cyprus in 1974, was recently recovered in a Monaco apartment and returned to Cypriot officials. The ancient masterpiece was described by Arthur Brand, the Dutch investigator who located it, as “one of the last and most beautiful examples of art from the early Byzantine era.” END_OF_DOCUMENT_TOKEN_TO_BE_REPLACED

END_OF_DOCUMENT_TOKEN_TO_BE_REPLACED

Often while working just below the Southern Wall of the Temple Mount over the past few years, I’d look up from the dirt and notice a camera crew setting up. They did not seem to be Jews, but rather reporters from Palestinian news crews. Unlike most others who walked past the dig site, these journalists would rarely ask questions about what we were finding or what we were doing digging there. Instead, they would simply set up their cameras in a particular location. There, with one simple pan upward, they could tape the excavation site along with the black dome of the Al-Aqsa Mosque in the background. After a few more minutes and a few more shots, they’d pack their gear and head back up the street. There wasn’t any need to ask questions or to investigate further; they already had their story: The Jews are trying to undermine Al-Aqsa. END_OF_DOCUMENT_TOKEN_TO_BE_REPLACED 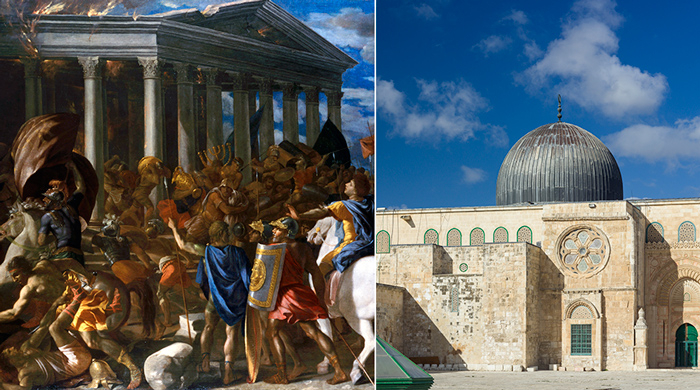 You do not have to be a historian to know that Jerusalem was originally a Jewish city with, later, Christian connections and, later still, weak Islamic connections. The second Jewish Temple, completed by King Herod in 19 BCE, was destroyed by the Romans in 70 CE (depicted at left in a 1626 painting by Nicolas Poussin). The current Aqsa Mosque (right) on the Temple Mount was first built in the year 705, seventy-three years after Muhammad’s death in 632, and rebuilt several times after earthquakes. (Images’ source: Wikimedia Commons)

UNESCO, the United Nations Educational, Scientific and Cultural Organization, is known throughout the world for the many places it designates as World Heritage Sites. There are more than one thousand of these, distributed unequally in many countries, with Italy at the top, followed by China.

END_OF_DOCUMENT_TOKEN_TO_BE_REPLACED

Beirut: The Russian military is constructing a new army base in the central Syrian town of Palmyra, within the protected zone that holds the archaeological site listed by UNESCO as a world heritage site and without asking for permission from relevant authorities, an American heritage organisation and a top Syrian archaeologist said Tuesday.

The American School of Oriental Research’s Cultural Heritage Initiative posted pictures from the satellite imagery and analytics company DigitalGlobe that show the construction on the edge of the ancient site that was damaged by the Islamic State group, which held Palmyra for 10 months.

A UNESCO official said it was unclear whether the encampment was in a buffer zone to the archaeological site but said it does not form a threat to the historic area. END_OF_DOCUMENT_TOKEN_TO_BE_REPLACED

“Turkey has every right to conduct operations in Syria and the places where terror organizations are nested with regards to the struggle against the threats that Turkey faces,” Erdogan said February 20, during the event “UNESCO City of Gastronomy: Gaziantep,” which was organized to celebrate the inclusion of Turkey’s southeastern province of Gaziantep on the list of UNESCO’s Creative Cities Network in the gastronomy category, Hurriyet Daily News reported. END_OF_DOCUMENT_TOKEN_TO_BE_REPLACED