TAIPEI (Taiwan News) – At a conference held in Beijing on Saturday, Chinese government and military officials discussed issues in the South China Sea and the current state of relations between the U.S. and China. END_OF_DOCUMENT_TOKEN_TO_BE_REPLACED

In a interview about fracking and the implications of making the United States less dependent on foreign sources of energy, Interior Secretary Ryan Zinke told the Washington Examiner that the US Navy has the ability to blockade Russia from controlling energy supplies in the Middle East.

“The United States has that ability, with our Navy, to make sure the sea lanes are open, and, if necessary, to blockade… to make sure that their energy does not go to market,” Zinke said on Friday at a Consumer Energy Alliance event in Pittsburg.  END_OF_DOCUMENT_TOKEN_TO_BE_REPLACED 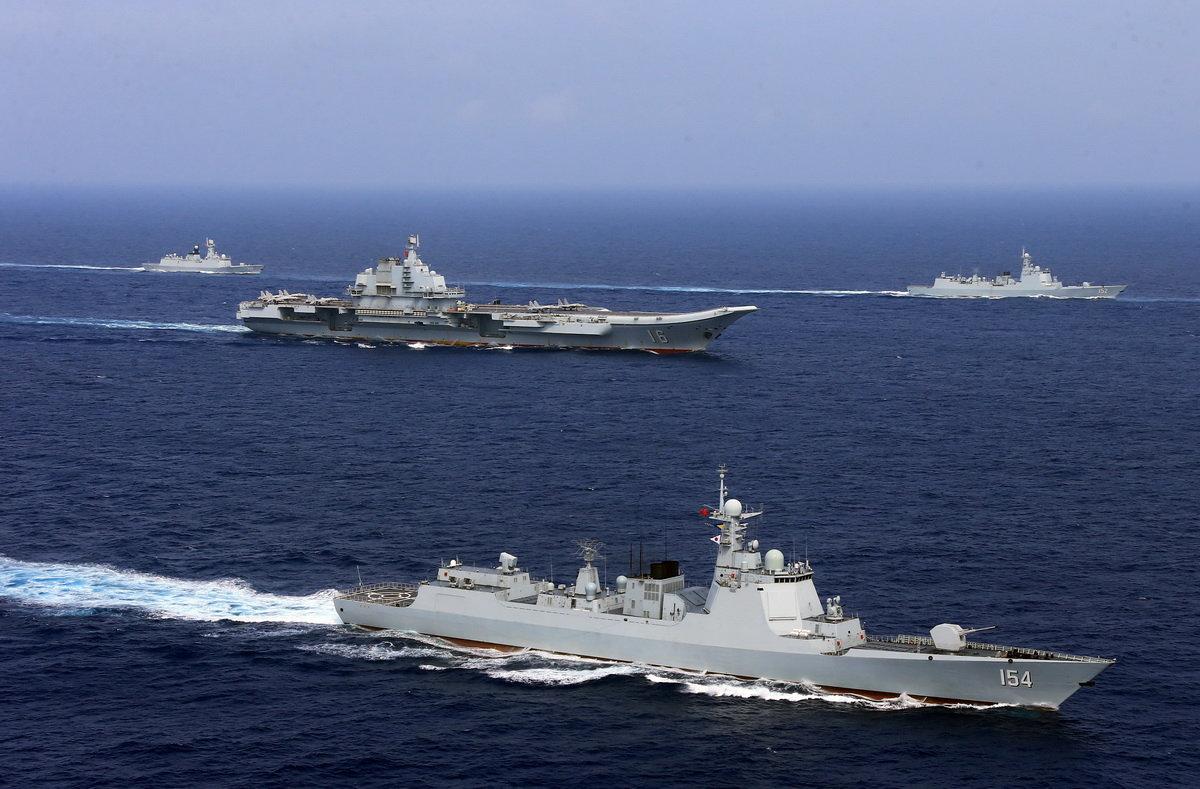 The presence of the US warships was slammed by Beijing just as President Donald Trump seeks to make peace with North Korea to avoid war breaking out.  END_OF_DOCUMENT_TOKEN_TO_BE_REPLACED

Military source says several fatalities and casualties resulted in the missile attack on T4, according to pro-regime TV. pic.twitter.com/DzoMuhBKI8

Update: confusion, of course. According to Syria’s TV channels, there has been an “aggression on T4 airfield with several strikes, likely to be by the US”. Meanwhile Pentagon officials deny any  US involvement.

END_OF_DOCUMENT_TOKEN_TO_BE_REPLACED

Now would be a great time to assess whether those two North Korean ‘weather satellites’ hanging over the continental United States (one launched right after the Super Bowl in 2016) aren’t EMP devices ready to drop on command.

They did state, after all, that they are ready to preemptively nuke the United States.

A couple of successful hits would bring America back to the 1800s. Maybe North Korea can’t wait for an imminent attack for a reason.

PYONGYANG, April 11 (Reuters) – North Korean state media on Tuesday warned of a nuclear attack on the United States at any sign of U.S. aggression as a U.S. Navy strike group steamed towards the western Pacific.

U.S. President Donald Trump, who has urged China to do more to rein in its impoverished neighbour, said in a Tweet North Korea was “looking for trouble” and the United States would “solve the problem” with or without China’s help.

North Korea’s official Rodong Sinmun newspaper said the country was prepared to respond to any aggression by the United States.

“Our revolutionary strong army is keenly watching every move by enemy elements with our nuclear sight focused on the U.S. invasionary bases not only in South Korea and the Pacific operation theatre but also in the U.S. mainland,” it said. END_OF_DOCUMENT_TOKEN_TO_BE_REPLACED

In this image taken from video run by China’s CCTV via AP Video, a J-15 fighter jet takes off from the flight deck of the aircraft carrier Liaoning during a drill in the South China Sea. China confirmed that its aircraft carrier has for the first time conducted drills in the South China Sea with a formation of other warships and fighter jets, a move that could raise concerns among its neighbors. | CCTV VIA AP VIDEO

BEIJING – A group of Chinese warships led by its sole aircraft carrier is testing weapons and equipment in exercises this week in the South China Sea that are going to plan, China’s foreign ministry said Wednesday.

Exercises by the ships, in particular the aircraft carrier Liaoning, since last month have unnerved China’s neighbors, especially at a time of heightened strain with self-ruled Taiwan, which Beijing claims as its own, and given long-running territorial disputes in the South China Sea.

China says the Soviet-built Liaoning and the other ships conduct routine exercises that comply with international law. END_OF_DOCUMENT_TOKEN_TO_BE_REPLACED

The Islamic Revolutionary Guards Corps (IRGC) threatened to “drown” any US warships approaching Iran, a top general said Tuesday, according to state-controlled media.

“We have informed Americans that their presence in the Persian Gulf is an absolute evil,” Rear Admiral Ali Fadavi stated to state media. “Americans are aware that Iran would destroy their warships if they take a wrong measure in the region.” END_OF_DOCUMENT_TOKEN_TO_BE_REPLACED

China’s plans to build up a disputed island near the Philippines could lead to a regional conflict, Defense Secretary Ash Carter told Congress on Thursday.

Carter was asked about the strategic significance of China’s plan to add military facilities to a disputed island known as Scarborough Shoal located about 120 miles—within missile range—of Subic Bay, Philippines, where U.S. warships will be based. END_OF_DOCUMENT_TOKEN_TO_BE_REPLACED

Satellite images produced by a US company earlier this month allegedly showing the deployment of surface-to-air missiles batteries on Woody Island in the Parcel chain in the South China Sea. Photo: Reuters

A commentary published online by state media in China says its forces should fire warning shots or even deliberately collide with US warships sailing close to the Paracel Islands in a disputed area of the South China Sea.

The commentary says tough action would make an impression on the US and “teach it a lesson”. END_OF_DOCUMENT_TOKEN_TO_BE_REPLACED

Kuala Lumpur: China said on Sunday it will continue to build military and civilian facilities on its artificial islands in the disputed South China Sea and the United States was testing it by sending warships through the area.

“Building and maintaining necessary military facilities, this is what is required for China’s national defence and for the protection of those islands and reefs,” Vice Foreign Minister Liu Zhenmin told a news conference in Kuala Lumpur. END_OF_DOCUMENT_TOKEN_TO_BE_REPLACED

The People’s Liberation Army may deliberately ram a vessel into a US warship if the US Navy makes further ventures into waters claimed by China, says the Beijing-based Sina Military News, just as US officials confirmed that they have sent a destroyer to pass within 12 nautical miles of one of China’s artificial islands in the disputed region.

The report said the US Navy has since May been sending warships near China’s man-made islands in the South China Sea. But until now, the ships have operated at least 12 nautical miles away from the islands where China has been conducting extensive land reclamation to build airstrips and facilities. The move on Tuesday goes further in challenging China’s territorial claims.

Given that China’s military constructions such as runways on several South China Sea islands are not yet complete and the PLA’s South Sea Fleet is too far away to react promptly, the only option for China is to use nearby patrol frigates to monitor and intercept US vessels that come within what Beijing considers its territory. END_OF_DOCUMENT_TOKEN_TO_BE_REPLACED

At a time when the US and China are practically at arms over the artificial islands in the South China Seas, with the US sending warships on location to patrol (despite White House Spokesman Josh Earnest saying on Oct. 8 that U.S. warships “should not provoke significant reaction from the Chinese”) and a stunned China responding “What On Earth Makes Them Think We Will Tolerate This“, the last thing we thought we would see right now was three Chinese warships about to port in Florida’s Naval Station Mayport.

And yet according to USNI that is precisely what is about to happen: citing US Navy officials, USNI reports that he three ships about to dock in the US are the Type 052C Luyang II-class guided-missile destroyer Jinan (152), the Type 054A Jiangkai II-class guided-missile frigate Yiyang (548) and the Type 903 Fuchi-class fleet oiler Qiandao Hu (886). END_OF_DOCUMENT_TOKEN_TO_BE_REPLACED

The next time the United States sends warships by China’s man-made islands in the disputed South China, officers aboard will have to decide how, if at all, they will engage with a pair of giant lighthouses that Beijing lit up there this month.

Alireza Tangsiri, an IRGC lieutenant commander, said that suicide bombers are on stand by and ready to “blow up themselves” to “destroy the U.S. warships,” according to remarks made Monday in Iran’s state-controlled Fars News Agency. END_OF_DOCUMENT_TOKEN_TO_BE_REPLACED

Shen Diao, China’s new unmanned aerial vehicle also known as the Divine Eagle, could be used to track the location of US aircraft carriers in the Western Pacific and guide DF-21D anti-ship ballistic missiles to their target, according to overseas Chinese news outlet Duowei News. END_OF_DOCUMENT_TOKEN_TO_BE_REPLACED