A child in her house in Barlovento waits for lunch, which consists of only boiled yam. Food sold in the black market can be 1000 per cent higher than what it cost in government-regulated grocery stores. Photo: Washington Post

Caracas: In the darkness the warehouse looks like any other, a metal-roofed hangar next to a clattering overpass, with homeless people sleeping nearby in the shadows.

But inside, workers quietly unload black plastic crates filled with merchandise so valuable that mobs have looted delivery vehicles, shot up the windshields of trucks and hurled a rock into one driver’s eye. Soldiers and police milling around the loading depots give this neighbourhood the feel of a military garrison.

“It’s just cheese,” said Juan Urrea, a 29-year-old driver, as workers unloaded thousands of pounds of white Venezuelan queso from his delivery truck. “I’ve never seen anything like this before.” END_OF_DOCUMENT_TOKEN_TO_BE_REPLACED

And now, as president Maduro remains defiant on allowing a referendum to take place to vote on his ouster, food riots and violent looting are taking place every day in a stark reminder of just how far the socialist utopia has fallen. END_OF_DOCUMENT_TOKEN_TO_BE_REPLACED

(NaturalNews) As Venezuela’s economy continues to worsen — its currency having entered “free fall mode,” according to the Financial Times — the desperate Maduro government has taken the extreme measure of nationalizing the nation’s food industry.

Venezuelan farmers and food producers are now required to sell anywhere from 30 percent to 100 percent of their products to state-owned stores. The order covers staple foods such as rice, milk, oil, sugar and flour. END_OF_DOCUMENT_TOKEN_TO_BE_REPLACED 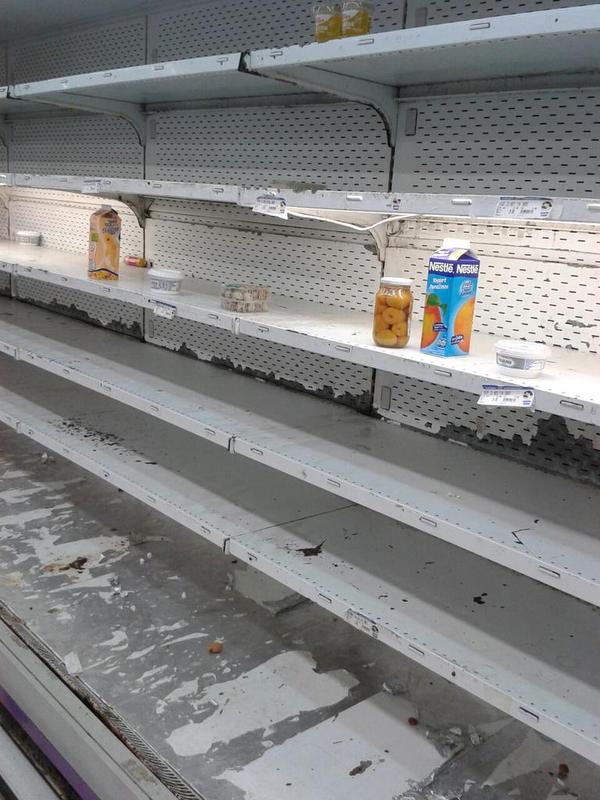 Social media is awash with striking images of #EmptyShelvesInVenezuela (#AnaquelesVaciosEnVenezuela) as the evaporation of basic human staples such as toilet paper has now been hyperinflated to total chaos at warehouses and supermarkets. As President Maduro decries the loss of $100 oil “stability”, vowing to return oil prices to their rightful places (and heads to China for help), lines reach for miles for milk and soap… and the people defy governmental bans on photographing empty market shelves… “We couldn’t find shampoo, so we washed our hair with soap. Now there’s not even soap.” END_OF_DOCUMENT_TOKEN_TO_BE_REPLACED

In a sign Venezuela’s food shortages could be worsening, restrictions on the sale of 20 basic items subject to price controls, including toilet paper and chicken, are set to begin next week in its most populous state, officials said on Tuesday.

A spokesman for Venezuelan President Nicolas Maduro’s government said it is incorrect to call the plan rationing because it is meant to fight smuggling of price-controlled food across the border into Colombia. He said there are no plans to extend the program nationally. END_OF_DOCUMENT_TOKEN_TO_BE_REPLACED