On September 17, 1950, more than 68 years ago, the first Turkish brigade left the port of Mersin on the Mediterranean coast, arriving, 26 days later, at Busan in Korea. Turkey was the first country, after the United States, to answer the United Nations’ call for military aid to South Korea after the North attacked that year. Turkey sent four brigades (a total of 21,212 soldiers) to a country that is 7,785 km away. By the end of the Korean War, Turkey had lost 741 soldiers killed in action. The U.N. Memorial Cemetery in Busan embraces 462 Turkish soldiers. END_OF_DOCUMENT_TOKEN_TO_BE_REPLACED

S-500 Air Defense System, which Erdogan said Turkey could upgrade to in the future, in defiance on Washington. Image via Military and Commercial Technology blog

“This is over” — President Recep Tayyip Erdogan said this week as US Congress continues discussion and debate on holding up delivery of Lockheed-produced F-35 stealth jets purchased previously by Turkey due to Ankara’s intent to receive Russian S-400 anti-air defense systems from Russia. END_OF_DOCUMENT_TOKEN_TO_BE_REPLACED

The timing of the Turkish foreign minister’s unexpected phone call today with his Russian counterpart in the middle of US-Turkey talks on Syria is the latest sign that Washington and Ankara remain hopelessly at odds over how to move forward in the region.

Why it matters: Mevlut Cavusoglu’s call to Sergey Lavrov was made “upon the initiative of the Turkish side,” the Russian Foreign Ministry said in a statement. The Syria dossier topped the agenda. END_OF_DOCUMENT_TOKEN_TO_BE_REPLACED

Turkey is now venting its wrath as its F-35 standoff with Washington is thrust to the next level, and after Friday President Trump signed a spending bill that blocks further F-35 transfers until November 1st of 2019, which gives the White House a window of time to evaluate if Ankara will indeed move forward with transfer of Russia’s S-400 air defense system to Turkey. Amidst the Pastor Andrew Brunson detention affair which drew widespread media attention last summer Congressional leaders demanded that the over 100 Lockheed Martin-made F-35 stealth jets purchased by Turkey be blocked from delivery. Following Brunson’s release, the bigger security issue became Turkey’s seeking the S-400. END_OF_DOCUMENT_TOKEN_TO_BE_REPLACED

Global tensions caused by economic sanctions and trade conflicts triggered by Washington have forced targeted countries to take a fresh look at alternative payment systems currently dominated by the US dollar. END_OF_DOCUMENT_TOKEN_TO_BE_REPLACED

The S-300 is outdated but being sold on the world market to nations such as Syria and Iraq, to name a few. The S-400 is today’s up-to-date tech and will possibly be sold to Turkey and Iran, while the barely-talked-about S-500 is already advanced and circles Moscow in a ring of protection. It is not available on the market and information on it is kept secret. Now we hear groundbreaking information on not only about an S-600 and S-700, but an S-1500.

Within the interview he stated that these new systems have the potential to shut down global air traffic, which would also imply shutting down the ability of launching ICBMs — which further implies Russia has checkmate in eliminating first strike capability of any nation in the world, including the United States. Currently, the U.S. has only the already-outdated Patriot missile defense system and Minuteman III ICBMs, which were last deployed in the early 1990’s.

People within the United States bubble do not understand the implications and realize that they are no longer untouchable. All they know is Stormy Daniels and maybe at most the latest regarding the Turkish diplomat that was likely murdered in a Saudi consulate.

The nation needs to get right with God and back on track before it’s too late. Donald Trump could be gone in 2020, maybe power through until 2024 or even be impeached tomorrow. Whatever your views of him, he is only here to give America reprieve in the limited time it has left as a nation, as we all know it.

This is America’s last chance to get it right.

Vladimir Zhirinovsky, a Russian MP who has lead the nationalist Liberal Democratic Party (LDPR) since the 1990s, has let slip that Russia allegedly had “S-600” and “S-700” air defense systems.

The earth-shattering “revelation” came when the flamboyant 72-year-old legislator was commenting on the recent delivery of the S-300 missile defense systems to Syria. END_OF_DOCUMENT_TOKEN_TO_BE_REPLACED

END_OF_DOCUMENT_TOKEN_TO_BE_REPLACED

BERLIN/ANKARA (Own report) – Turkish President Recep Tayyig Erdoğan’s arrival in Berlin on a state visit amid media reports of arms cooperation with his country and of state-sponsored denunciation, using a smartphone app of those – also in Germany – critical of his government. Erdoğan will be received with all protocolary state honors, since the German government wants to strengthen its ties to Ankara at all costs. There is a growing risk that Ankara will turn its back on the West. Germany seeks to strengthen these ties because of Turkey’s contribution to warding off refugees and particularly for geostrategic motives. Turkey is regarded as the indispensable isthmus to Germany gaining the much-coveted influence in Central Asia and the Middle East. Ankara is also facilitating the participation of Berlin in achieving an alignment in Syria, together with Moscow – but with the exclusion of Washington. Expansion of German-Turkish cooperation involves contracts in the billions for German companies and German participation in the development of Turkey’s own arms industry.

END_OF_DOCUMENT_TOKEN_TO_BE_REPLACED

In January, 2018 Turkey reportedly awarded an 18-month contract for a study on the development and production of a long-range air- and missile-defense system to France and Italy, showing — ostensibly — Turkey’s ongoing commitment to NATO. The study, contracted between the EUROSAM consortium and Turkey’s Aselsan and Roketsan companies, was agreed upon in Paris, on the sidelines of a meeting between French President Emmanuel Macron and Turkish President Recep Tayyip Erdogan. END_OF_DOCUMENT_TOKEN_TO_BE_REPLACED

With the US increasingly willing to use the dollar, and SWIFT, as a strategic weapon against the country’s sovereign enemies (as Iran learned every 5 or so years), Russia and India are preparing to bypass US sanctions on Moscow by using the rupee and the ruble in bilateral trade involving military deals, the Economic Times reported.

Some $2 billion in weapons deals between India and Russia have been hit as a result of the recent US sanctions, as payments get stuck. The countries are seeking to bypass such monetary bottlenecks this by switching to settlements in domestic currencies and ditching the greenback. END_OF_DOCUMENT_TOKEN_TO_BE_REPLACED

As mentioned in a previous post, look for Turkey to align itself with the axis powers, and even likely the Shanghai Cooperation Organization — a worldwide war axis that masquerades itself around as a political organization. NATO is finished and Europe, ran by Berlin, is looking to defend itself with its own European Army under construction.

A the last minute, by a large majority of 85 to 10, the US Senate blocked the sale of the advanced US F-35 stealth planes to Turkey until a detailed plan is presented to prove that Ankara would not have access to US technology for its home manufacture of components. END_OF_DOCUMENT_TOKEN_TO_BE_REPLACED 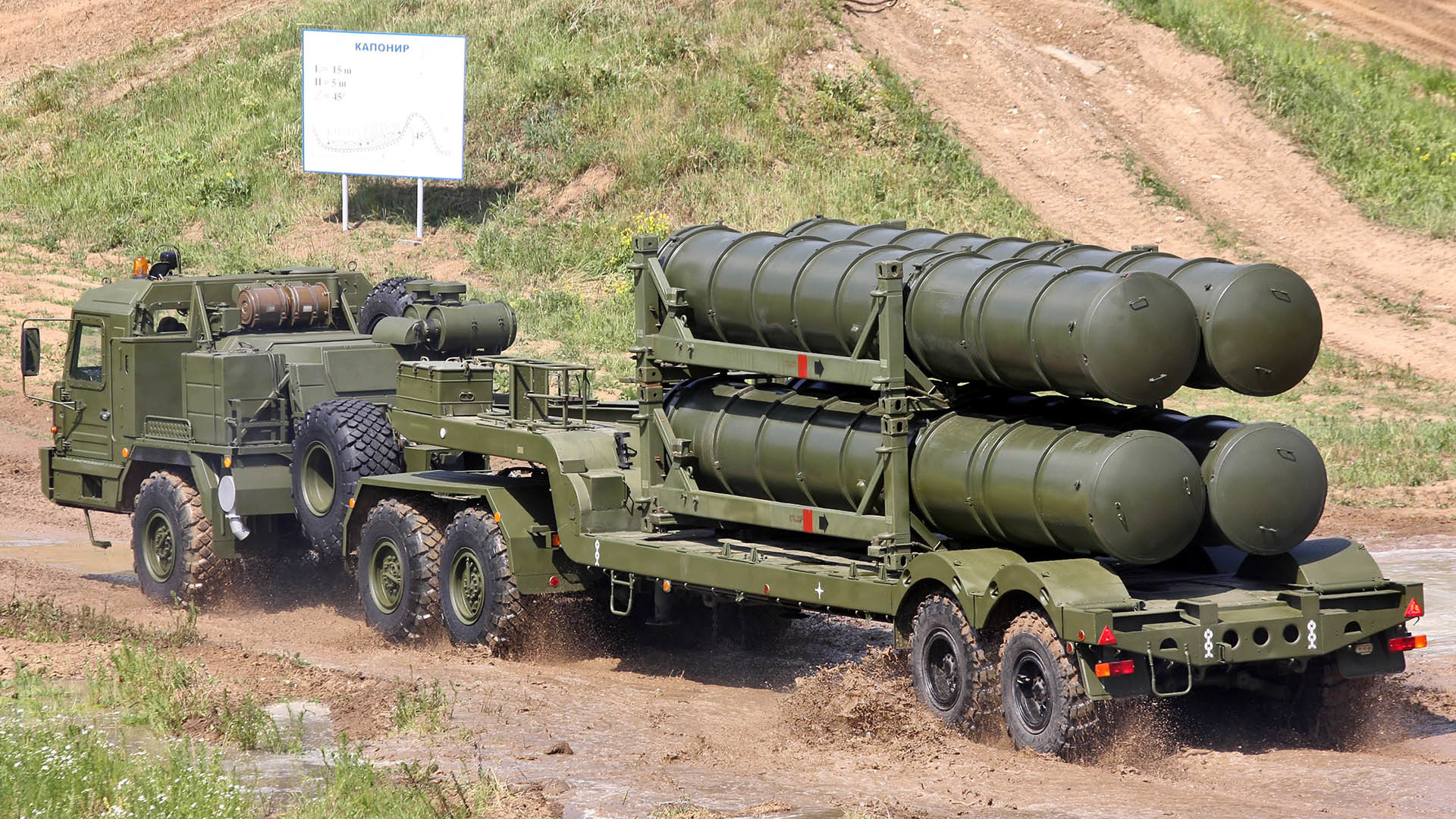 “The kingdom would be ready to take all necessary measures to eliminate this defense system, including military action.” END_OF_DOCUMENT_TOKEN_TO_BE_REPLACED

Democratic Senator Jeanne Shaheen and Republican Senator Thom Tillis are responsible for the new amendment to the National Defense Authorization Act that would eliminate Turkey from the F-35 program over its recent purchase of Russian S-400 anti-missile system.

In response, Turkey pivoted towards Russia, and is expected to acquire Sukhoi SU-57 fifth-generation fighter jets, if Washington chooses to suspend Ankara from the F-35 program. END_OF_DOCUMENT_TOKEN_TO_BE_REPLACED

Next month the heads of state of India and Pakistan will attend, for the first time as full members, the Shanghai Cooperation Organization Summit, being held in Qingdao, China. Pakistan was already engaged with SCO member states through the Belt and Road Initiative (BRI). Joining the SCO will reinforce Pakistan’s position and integration into the region.

However, regarding India, there are few clarifications needed. What will India’s role be in the SCO? How well can India integrate into the SCO? What are the expectations? END_OF_DOCUMENT_TOKEN_TO_BE_REPLACED