Given the poor state of relations between the Kremlin and the United States, the American superpower is evidently the primary target of new Russian weaponry, but the deployment of Poseidon could eventually become an issue for China as well. END_OF_DOCUMENT_TOKEN_TO_BE_REPLACED

The Soviet-era arms race between the US and Russia is officially back on.

To wit, Moscow is reportedly building a fleet of nuclear submarines armed with hypersonic ICBMs capable of delivering a nuclear payload ten times larger than the bomb dropped on Hiroshima, according to CNBC, which cited a US intelligence report on the new weapons. Russian President Vladimir Putin hinted at six new super weapons during a speech back in March where he also revealed that Russia is working on a nuclear missile capable of evading NATO’s ring of ABM defenses. END_OF_DOCUMENT_TOKEN_TO_BE_REPLACED

A US aircraft carrier has been dispatched from a naval base in Virginia days after a Russian spy ship was spotted just 27 miles off the coast.

The USS George HW Bush, a Nimitz-class supercarrier, was deployed from Naval Station Norfolk, in southeastern Virginia, on Tuesday morning, according to maritime traffic monitors.

Naval trackers show the 1,092ft aircraft carrier is sailing through the Atlantic Ocean but details of its mission were not immediately available. END_OF_DOCUMENT_TOKEN_TO_BE_REPLACED

Submarines, bombers and and a mobile launcher. Four ballistic missiles, two in each direction, crossed the Arctic hemisphere Thursday evening.

END_OF_DOCUMENT_TOKEN_TO_BE_REPLACED 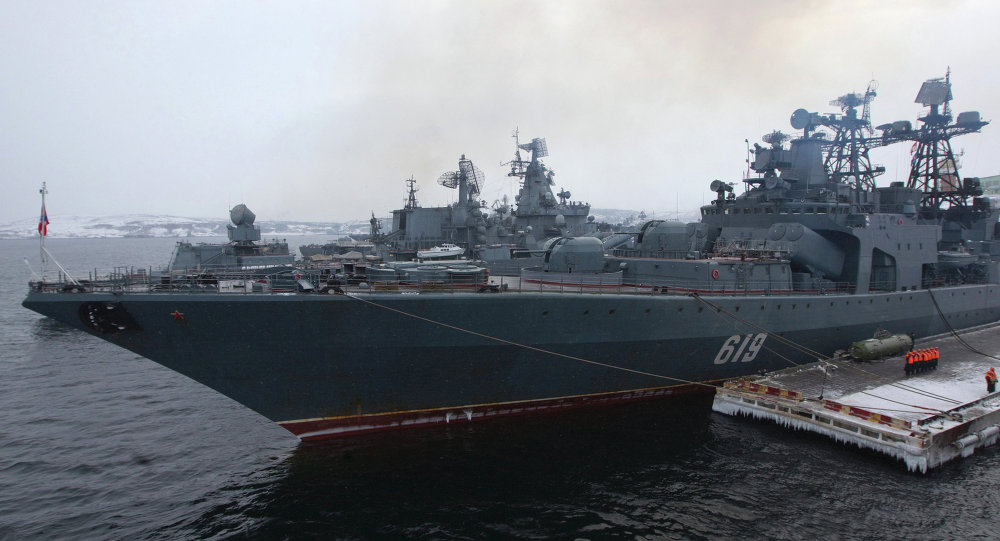 MOSCOW (Sputnik) — The Russian Navy’s large anti-submarine ship Severmorsk has completed a business visit to Oman’s port of Salalah and continued its mission in the Indian ocean, with further participation in the Aman 2017 international naval exercises, which will be held in the North of the Arabian Sea, the press service of the Russian Northern fleet said Tuesday. END_OF_DOCUMENT_TOKEN_TO_BE_REPLACED

It is part of a push to firm Moscow’s hand in the High North as it vies for dominance with traditional rivals Canada, the United States, and Norway as well as newcomer China. END_OF_DOCUMENT_TOKEN_TO_BE_REPLACED

END_OF_DOCUMENT_TOKEN_TO_BE_REPLACED

The latest World War 3 update has revealed Russia’s plans of attacking the United States in the coming 15 days while German army proceeds towards the Russian border.

According to the reports, Russia is encouraging its navy for final preparation for the international conflict, which shows the nation is all set to attack the Western nation anytime in few weeks. It has been discovered that President Vladimir Putin’s nation has initiated warships that are now cruising close to the North Sea while they plan to cross one mile from British shores in the English Channel. On their way to the Mediterranean, they would launch supportive operations in Syria. END_OF_DOCUMENT_TOKEN_TO_BE_REPLACED

The following is a list detailing Russia’s military drills during October:[1]

Kremlin spokesman Dmitry Peskov said that the Admiral Kuznetsov aircraft carrier, currently en route to Syria, will unlikely be involved in exerting control over the skies over Syria. Peskov said: “I do not think that it is necessary to keep somebody away, [or that] somebody can attack [the Syrian government forces] … as there are enough instruments to control the skies, to control the safety of our temporary infrastructure in Syria, which is why there is no such opportunity.” (Sputniknews.com, October 22) END_OF_DOCUMENT_TOKEN_TO_BE_REPLACED

Just moments ago we reported that in the latest escalation involving Syria, the Russian aircraft carrier Kuznetsov was now sailing past Norway on its way to Syria, where it is expected to arrive in just under 2 weeks.  As part of the carrier naval group, Russia also deployed an escort of seven other Russian ships, which we dubbed the “most powerful Russian naval task force to sail in northern Europe since 2014” according to Russia’s Nezavisimaya Gazeta daily reports.

It turns out it it was even bigger, because according to a NATO diplomat cited by Reuters, Russia is “deploying all of the Northern fleet and much of the Baltic fleet in the largest surface deployment since the end of the Cold War,” the diplomat said on condition of anonymity.

“This is not a friendly port call. In two weeks, we will see a crescendo of air attacks on Aleppo as part of Russia’s strategy to declare victory there,” the diplomat said. END_OF_DOCUMENT_TOKEN_TO_BE_REPLACED

Videos available for viewing at the source.

The new story from Zero Hedge that Steve Quayle linked to Saturday morning tells us it has been revealed that the Russian military now has an ‘invisibility cloak’ that could give Russia the upper edge in clandestine operations and electronic warfare. “For the first time, these weapons do exist” we are told.

However, apparently just dabbling in ‘invisibility’ isn’t enough and as we learn in this new story over at ABC News International, Russia has decided to take their little experiment to the next level by holding a bizarre military drill that is leaving the world scratching their heads as the Russian military will hide an ENTIRE CITY on the country’s Arctic coast. END_OF_DOCUMENT_TOKEN_TO_BE_REPLACED

“Currently the development is being finalized on a new modern generation of missiles that have not been announced. They will be impregnable to NATO weapons, including air defense systems,” Evgeny Serebrennikov told RIA Novosti.

END_OF_DOCUMENT_TOKEN_TO_BE_REPLACED

The new submarine recently completed operational testing after being accepted into service in June 2014. Prior to that, the boat had been undergoing pre-delivery sea trials since September 2011. END_OF_DOCUMENT_TOKEN_TO_BE_REPLACED

Washington (CNN)Marines are prepositioning battle tanks, artillery and logistics equipment inside Norwegian caves as the U.S. pushes to station equipment near the NATO-Russia frontier.

“Any gear that is forward-deployed both reduces cost and speeds up our ability to support operations in crisis, so we’re able to fall in on gear that is ready-to-go and respond to whatever that crisis may be,” Col. William Bentley, operations officer for the 2nd Marine Expeditionary Brigade, said in a statement Friday on the Norwegian deployment that called the caves classified. END_OF_DOCUMENT_TOKEN_TO_BE_REPLACED