The discussions, which also involve the U.K., are a signal that European powers are trying to get serious about demonstrating a greater level of independence from the U.S. as President Donald Trump pursues his “America First” agenda. END_OF_DOCUMENT_TOKEN_TO_BE_REPLACED

In recent months, Russia – some claim – has “strenuously prepared for Putin’s meeting with Trump”.

What does this mean?

Firstly, in April the Central Bank of the Russian Federation dumped nearly a half of US Treasuries that it had on its balance sheet, reducing their stock from $96.2 billion to $48.7 billion. END_OF_DOCUMENT_TOKEN_TO_BE_REPLACED 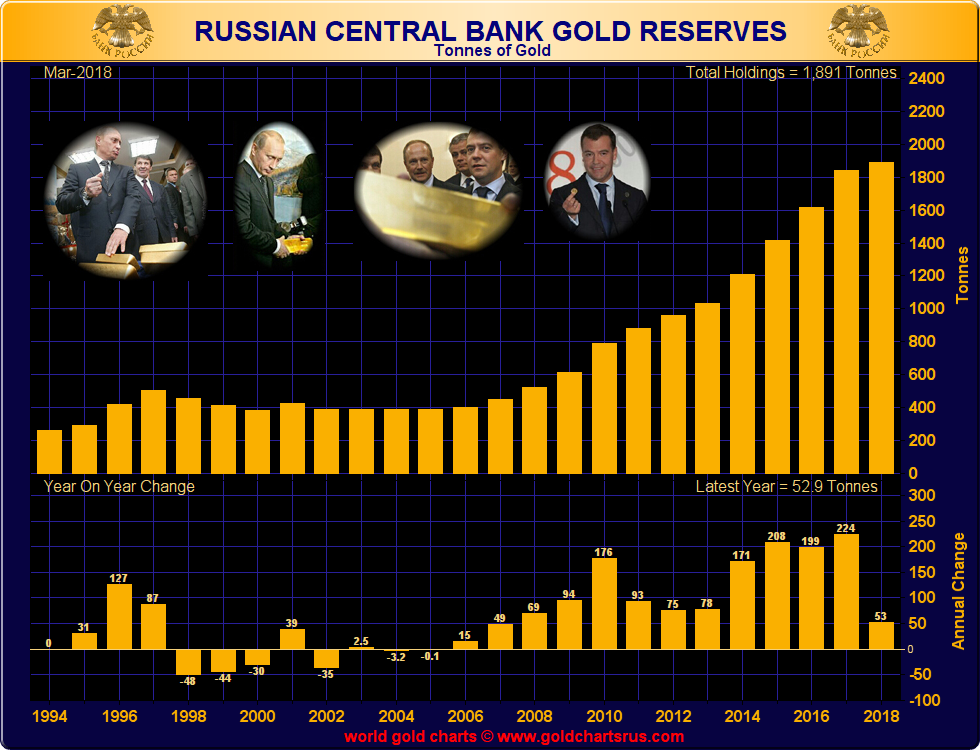 The continuing robust and steady accumulation of gold reserves continues and it was notable how Russian media channels loudly (more loudly than usual it seemed with many outlets covering) pronounced the continuing diversification into gold bullion by the Russian central bank. It suggests that gold is being used as a bulwark to protect Russia from the stealth financial, trade and currency wars which appear to be deepening. END_OF_DOCUMENT_TOKEN_TO_BE_REPLACED 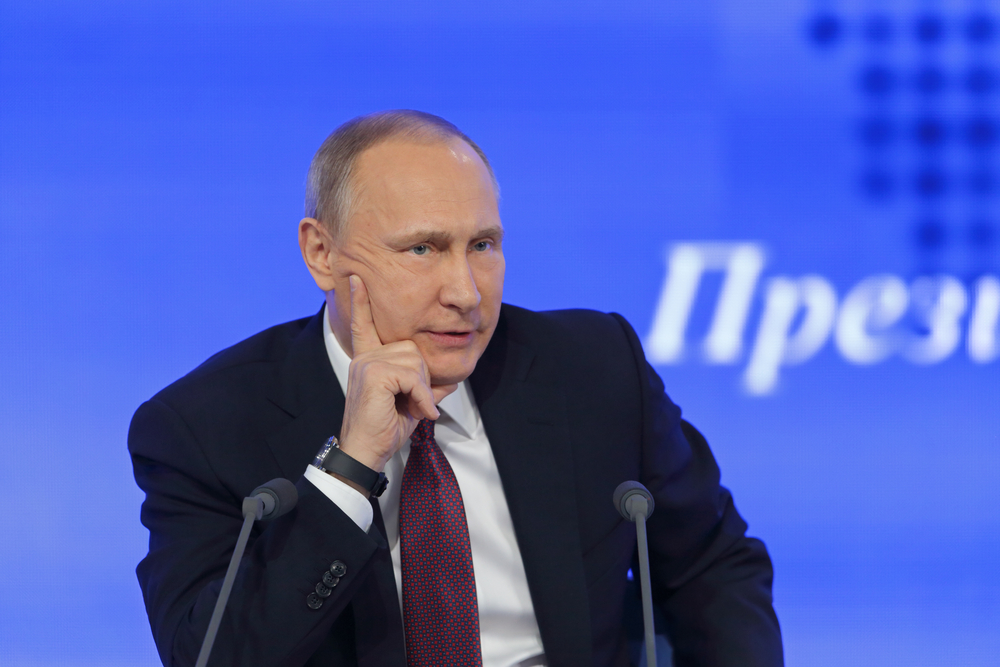 The list of bad acts laid at Putin’s feet is much longer than the one just recited, but you get the idea. He’s no Mr. Nice Guy. END_OF_DOCUMENT_TOKEN_TO_BE_REPLACED

Russian Finance Minister Anton Siluanov has warned of a possible “financial war” with the U.S. if its central bank assets are frozen or seized as part of economic sanctions.

In a sudden and somewhat shocking declaration, Russia’s financial minister has declared that any attempt by the U.S. to seize his country’s gold reserves would be deemed an act of war.

Anton Siluanov was announcing his government’s new budget and how it was crafted with likely U.S. sanctions in mind. Then, he added:

“If our gold and currency reserves can be arrested, even if such a thought exists, it would be financial terrorism.” END_OF_DOCUMENT_TOKEN_TO_BE_REPLACED

Russia’s central bank and the government are working together to fight banking hacker group Buhtrap.

An official spokesman of Xenia Yudaeva, the first Deputy Chairman of the Russian Central Bank, told SCMagazineUK.com that the hacker group uses sophisticated cyber-attacks, the most recent of which allowed it to steal about RUB 600 million £6.3 million) from Metallinvestbank, one of Russia’s largest banks.   END_OF_DOCUMENT_TOKEN_TO_BE_REPLACED

In the past, China has threatened to nuke the U.S. Dollar (which they are now doing, albeit slowly) and literally exterminate Americans on the homeland where they guaranteed hand-to-hand combat is around the corner.

You could always read the following for more proof:

It would be insane to let enemies of your nation inside the gate, but the United States did just that. You can only wonder if enemies were already inside the gate via fifth column and just let the rest of their team in.

Further thought on an earlier story:

A frightening article in today’s UK Telegraph suggests that another financial crisis could destroy capitalism as we know it. Let that sink in. Our system is at risk, as it was in 2008. As a reminder, consider this C-SPAN  interview with Representative Paul Kanjorski, wherein he described how our entire system almost collapsed. He stated in a very matter of fact way that if the collapse had continued, it would have been the end of our economic system and our political system, again “as we know it.” END_OF_DOCUMENT_TOKEN_TO_BE_REPLACED

Russia’s central bank recently warned about the growing financial risks to the Russian economy from Saudi Arabia encroaching upon its traditional export market for crude oil. Russia sends 70 percent of its oil to Europe, but Saudi Arabia has been making inroads in the European market amid the oil price downturn.

The result is a heavier discount for Russia’s crude oil, the so-called Urals blend. Bloomberg reported that the Urals typically lands in Rotterdam, a major European destination, at a discount to Brent of around $2 or less. But the discount has widened to $3.50 lately due to increased competition from Saudi Arabia. “Oil supplies to Europe from Saudi Arabia are probably adversely affecting Urals prices,” the Russian central bank warned in a recent report.

Russian officials have accused Saudi Arabia of “dumping” its oil in Europe, a move that Rosneft chief Igor Sechin said would “backfire.” END_OF_DOCUMENT_TOKEN_TO_BE_REPLACED

Putin did press Obama for the US to join Russia in a real grand coalition bent on smashing ISIS/ISIL/Daesh. The Obama administration, once again, relented. I detailed here what happened next: an earth-shattering game-changer in the ‘New Great Game’ in Eurasia, straight out of the Caspian Sea, that caught the acronym fest of US intelligence – not to mention the Pentagon – completely off-guard.

So this was Putin’s first message to Washington, and the Pentagon/NATO combo in particular; your fancy ideas of stationing tactical nuclear weapons or expanding missile defense to Eastern Europe, or even Asia-Pacific, are just a mirage. Our cruise missiles are capable of wreaking real effective havoc; and soon, as this piece argues, there will be more hypersonic, high-precision long-range missiles added to the mix. END_OF_DOCUMENT_TOKEN_TO_BE_REPLACED

The monthly accumulation of 1 million ounces in just one month was one of the more sizeable monthly purchases by China and equates to 31.1 metric tonnes in August alone.

The value of the bank’s holdings rose to $47.68 billion from $44.96 billion a month earlier, Russia said in a statement on its website. END_OF_DOCUMENT_TOKEN_TO_BE_REPLACED

Over the past several years, incidents involving fake gold (usually in the form of gold-plated tungsten) have emerged every so often, usually involving Manhattan’s jewerly district, some of Europe’s bigger gold foundries, or the occasional billion dealer. But never was fake gold actually discovered in the form monetary gold, held by a bank as reserve capital and designed to fool bank regulators of a bank’s true financial state. This changed on Friday when Russia’s “Admiralty” Bank, which had its banking license revoked last week by Russia’s central bank, was reportedly using gold-plated metal as part of its “gold reserves.” END_OF_DOCUMENT_TOKEN_TO_BE_REPLACED

An alternative to the U.S.-ran world has been planned for a while and now it’s already almost formed. All that’s missing is the putting together of a few final pieces, then deployment after a U.S. collapse and for the next world superpower(s) to fill the vacuum.

Russian President Vladimir Putin has drafted a bill that aims to eliminate the US dollar and the euro from trade between CIS countries.

This means the creation of a single financial market between Russia, Armenia, Belarus, Kazakhstan, Kyrgyzstan, Tajikistan and other countries of the former Soviet Union.

END_OF_DOCUMENT_TOKEN_TO_BE_REPLACED

Russia has been building its gold reserves as part of a continuing effort to reallocate its reserve portfolio.

“Russia has been aiming to diversify its forex reserves for some time, but that process was accelerated by sanctions against the country last year,” said Martina Bozadzhieva, head of research for Europe, Middle East and Africa at Frontier Strategy Group. END_OF_DOCUMENT_TOKEN_TO_BE_REPLACED

In the meantime, the turmoil offers an opportunity for Russia to advance its interests. Of course, the EU is an absolutely critical trading partner for Russia, so if the bloc starts to fray at the seams, that presents financial risks to an already struggling Russian economy. Russia’s central bank governor Elvira Nabiulllina warned in June of the brewing threat that a Greek default would have on Russia. “We do consider that scenario as one of possible risks which would increase turbulence in the financial markets in the European market, bearing in mind the fact the European Union is one of major trading partners, and we are definitely worried by it,” she said in an interview with CNBC.

With the economic fallout in mind, Russia does see strategic opportunities in growing discord within Europe. First, Russia is pushing its Turkish Stream Pipeline, a natural gas pipeline that it has proposed that would run from Russia through Turkey and link up in Greece. From there, Russian gas would travel on to the rest of Europe. Russia is vying against a separate pipeline project that would send natural gas from the Caspian Sea through Turkey and on to Europe. END_OF_DOCUMENT_TOKEN_TO_BE_REPLACED