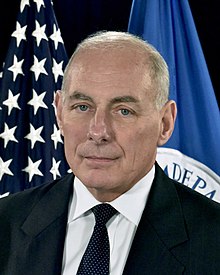 The personal cell phone of the White House Chief of Staff John Kelly (photo) was compromised by persons unknown and may have been bugged for nearly a year, according to United States government officials. General Kelly retired from the US Marine Corps in 2016, after serving as chief of the US Pentagon’s Southern Command, where he supervised American military operations in Latin America and the Caribbean. Soon afterwards, he was appointed by US President Donald Trump to lead the Department of Homeland Security, which he joined in January of 2017. Six months later, however, he replaced Reince Priebus, who resigned abruptly from the post of White House Chief of Staff, citing differences over management style with the Trump administration. END_OF_DOCUMENT_TOKEN_TO_BE_REPLACED

“Everyone knows not to talk to her in the White House unless you want to see it in the press,” says a source close to the president. “The only question is whether or not she’s doing it at the behest of [White House Chief of Staff] Reince Priebus or if she’s doing it to advance herself in DC media circles.” END_OF_DOCUMENT_TOKEN_TO_BE_REPLACED

Luis Videgaray, who arranged the fateful meeting between President Enrique Peña Nieto (left) and then candidate Donald Trump in Mexico City on Aug. 31, is back as Mexico’s foreign minister. / Yuri Cortez / AFP / Getty

Well, it’s finally come to pass.  Donald Trump is President of the United States, having been installed in the traditional inauguration ceremony on Jan. 20, in Washington, D.C.

Of course, the campaign and election of Donald Trump was fraught with controversy.  After all, the candidate was a real outsider who shook up the establishment of his own Republican party.

Now Trump is president, and the real test begins as a man who has never held public office before starts at the top. END_OF_DOCUMENT_TOKEN_TO_BE_REPLACED

Putin has issued a warning to Donald Trump that there may be a coup to overturn the presidency. There would be forces that would seriously hamper Trump’s leadership, Putin has warned. Meanwhile, Trump’s pick for White House chief of staff Reince Priebus, chairman of the Republican National Committee, does call into question if the swamp will be drained. Priebus has brought in Johnny DeStefano who will work as the director of presidential personnel. (Twitter/@johnnydestefano). END_OF_DOCUMENT_TOKEN_TO_BE_REPLACED