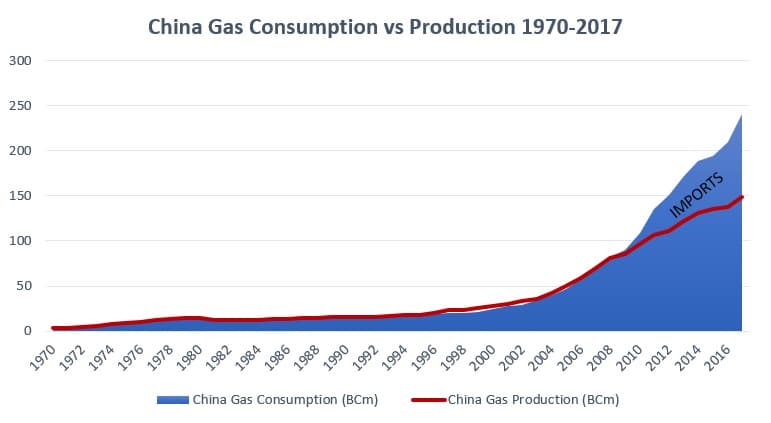 It is a matter of common knowledge that energy relations between Russia and China have boomed in the past decade, with all sorts of new infrastructure being built to facilitate the ever-further expansion of bilateral energy trade. Yet it has seemed for some time now that new gas projects are very unlikely to happen – the 38 BCm per year Power of Siberia pipeline will go onstream December 20, 2019 and seemed to satiate China‘s needs for Russian gas – but that has now changed. A second project, generally denoted as the Altay pipeline (sometimes also mentioned as Power of Siberia-2), which had been stalled for four years due to limited demand and Gazprom’s sanctions-induced constraints, is set to be the next big Russo-Chinese gas project. END_OF_DOCUMENT_TOKEN_TO_BE_REPLACED

On September 1, 2014, Russian President Vladimir Putin and Chinese Premier Zhang Gaoli initiated the construction of what they claim will be “the world’s largest construction project.” This 3,968 km “Power of Siberia” pipeline connecting gas fields between Russian’s Siberia and China’s Northeast region is expected deliver four trillion cubic meters of gas to China over the next thirty years. With an estimated 1.2 trillion cubic meters of gas and 93 million tons of liquid hydrocarbons stock, Chayanda fields in the Republic of Yakutia will be the chief production station conveying gas to Northeast China through the border city of Blagoveshchensk. The overall cost of this gigantic enterprise has been evaluated at more than 20 billion dollars, which covers other investments in the region totaling 7.5 billion dollars. END_OF_DOCUMENT_TOKEN_TO_BE_REPLACED

Moscow and Beijing have developed closer bilateral ties as relations between Russia and the European Union worsen. Russian Prime Minister Dmitry Medvedev has said cooperation with Beijing is a top priority for Moscow.

“It is the rise of the Eurasia century,” one Asian source said. “Moscow and Beijing’s interests are converging.” END_OF_DOCUMENT_TOKEN_TO_BE_REPLACED

China intends to invest in massive projects in Crimea less than a month after the former Ukrainian province was annexed by the Russian Federation.

Vladimir Chizhov, Russia’s ambassador to the European Union, said Russia is partnering with China in two major Crimean projects:  the “Power of Siberia” gas pipeline and a 25 meter deep Crimean deep water port. These projects will continue despite the ongoing crisis in the Ukraine, Chizhov said.

Chizhov described the “Power of Siberia” gas pipeline as a mega-project that will pump 60 billion cubic meters of gas annually from the Kovykta and Tchayandinskoe gas fields to Russia’s far east, where a branch line will deliver 38 billion cubic meters a year to China. END_OF_DOCUMENT_TOKEN_TO_BE_REPLACED