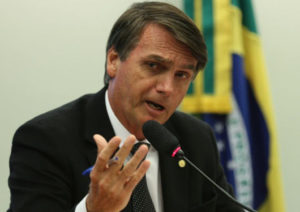 Brazil will relocate its embassy in Israel from Tel Aviv to Jerusalem, President-elect Jair Bolsonaro said on Nov. 1. END_OF_DOCUMENT_TOKEN_TO_BE_REPLACED

END_OF_DOCUMENT_TOKEN_TO_BE_REPLACED

Many nations today are casting their gaze upon a land where natural resources are found in abundance, where raw materials are yet to be extracted, and where renewable energy resources haven’t reached their full potential. They are ogling Latin America as a region that could help them secure their economic future.

For a time, China, and to some degree Russia, seemed to gain the upper edge.

But the Trumpet did not expect that arrangement to last. “[B]e assured that Europe will not stand by passively and allow Beijing and Moscow to elbow it off the dance floor,” we wrote last year.

Now, the political landscape in parts of Latin America is changing, which may open the door for greater German involvement. END_OF_DOCUMENT_TOKEN_TO_BE_REPLACED

Argentine Ambassador to Russia Pablo Anselmo Tettamanti says the Eurasian Economic Union (EEU) is an important partner for Argentina, and Mercosur wants to continue developing cooperation with their Eurasian partners. He also added that Russia is discussing new investment opportunities with Argentina.

According to the ambassador, Argentina facilitated significant progress in reaching an agreement between Mercosur and the Eurasian Economic Union in the last six months of 2014. A number of meetings held in Moscow and Buenos Aires have led to the creation of a draft cooperation agreement in the economic and trade spheres between the two regional trading blocs. END_OF_DOCUMENT_TOKEN_TO_BE_REPLACED

BUENOS AIRES, November 26. /TASS/. The Eurasian Economic Union, which is due to go into effect in 2015, and the Southern Common Market (Mercosur) have almost agreed on a memorandum of understanding, a minister for trade of the Eurasian Economic Commission told TASS in an interview on Wednesday.

“We have in fact completed the work on the memorandum of cooperation in the economic sphere between the two integration associations,” said Andrey Slepnev, who leads talks with Argentina, the current chair of the Mercosur trade group. END_OF_DOCUMENT_TOKEN_TO_BE_REPLACED

Thirty years ago, on April 2, 1982, Argentina invaded the Falkland. British Prime Minister Margaret Thatcher quickly assembled and dispatched a formidable naval task force to retake the islands, which had been a British possession since 1833. On June 14, Argentine forces surrendered to the Royal Marines. The conflict was brief and violent, with both nations losing ships and hundreds of sailors and soldiers. The war was, however, a decisive victory for the United Kingdom.

As the 30th anniversary of the war approached, in December, Argentinian President Christina Kirchner vowed that her nation would reclaim the Islas Las Malvinas, as the Falklands are called in Argentina. She stated that “[i]n the 21st century [Britain] continues to be a crude colonial power in decline.”  She branded British Prime Minister David Cameron “arrogant” and said his defense in parliament of the right of the people of the Falklands to self-determination was an expression of “mediocrity and stupidity.”

Argentina’s Foreign Minister, Hector Timerman, claims that Cameron’s defense of the Falklands sovereignty “is perhaps the last refuge of a declining power.” Prince William aka Flight Lieutenant Wales, who is currently piloting a Royal Air Force rescue helicopter in the Falklands, has been labeled a “conquistador” by Argentine officials.

While it seems unlikely that Argentina would risk another humiliating defeat by invading the Falklands in the near term, the temptation of appealing to nationalism to mask an economic or political crisis combined with the desire to control what appear to be significant South Atlantic oil reserves means that another Argentine military adventure cannot be ruled out. There are four key takeaways from the current situation with implications that stretch much further than the issue at hand:

First, military weakness is provocative. Argentina ramped up its aggressive rhetoric and diplomatic efforts to reclaim the Falklands only after P.M. Cameron announced massive cuts to the Royal Navy and British ground forces. The decommissioning last December of the U.K.’s sole remaining aircraft carrier, Ark Royal, well before its service life ended, and the sale of Britain’s 50 G-9 Sea Harrier fighter jets to the U.S. Marine Corps, seems to have emboldened the Argentines. In 1982, the Royal Navy had approximately 90 warships from which it could assemble a task force.  Today it has 30. Indeed, most experts believe that while it would be very difficult for the Argentine military to successfully invade the islands, it would be nearly impossible for the U.K. to retake them without an aircraft carrier in the event that Argentina was successful in overrunning Britain’s key air base at Mount Pleasant.

Second, the Obama administration has made the United States an unreliable ally for our closest friends. Britain has been a stalwart ally of the U.S. in both Iraq and Afghanistan, notwithstanding the tremendous domestic political pressure on Labour and Conservative governments not to participate in those unpopular wars. However, in 2010, Secretary of State Hillary Clinton called for talks over the dispute and even appeared to side with Argentina during a press conference with President Kirchner in Buenos Aires.  Last month, as the current situation developed, rather than send a clear message to Argentina that the United States supported its longtime ally, a State Department spokesman demurred: “[t]his is a bilateral issue that needs to be worked out directly between the governments of Argentina and the United Kingdom…We recognize de facto United Kingdom administration of the islands, but take no position regarding sovereignty.”  Nile Gardiner, the Telegraph’s Washington correspondent, wrote in response that the “Obama administration knife[d] Britain in the back again over the Falklands.”

The shabby treatment meted out to America’s “special relationship” partner in this instance cannot be seen as a surprise. It is in line with the administration’s treatment of Israel and Prime Minister Benjamin Netanyahu (at least prior to Bob Turner winning Anthony Weiner’s Congressional seat in New York). Poland and the Czech Republic suffered similar slights after the Administration unilaterally cancelled ABM sites in those countries as part of its naïve and, so far, unsuccessful attempt to “reset” relations with Russia.  And, there has been much criticism of the Administration for failing to provide Taiwan with the latest F-16 fighters that it has long requested to defend itself against a potential attack by China. There is no doubt that American allies such as Israel, Colombia, Georgia, Taiwan, the Gulf States and the Baltics, all of which live in dangerous neighborhoods, are watching the United States’ response to the Falklands row with concern.