A Russian spy ship is currently conducting surveillance operations in waters near a U.S. ballistic missile submarine base in Georgia, according to Navy officials.

“We are tracking the Viktor Leonov’s presence off the East Coast, much like we are aware of all vessels approaching the United States,” said Navy Cmdr. Bill Speaks, a Navy spokesman. END_OF_DOCUMENT_TOKEN_TO_BE_REPLACED 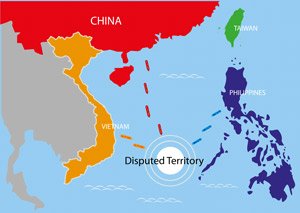 Xi called Lee’s three-day visit “a reflection of the closeness of the two countries’ relations,” according to Fox News.

And that could mean trouble ahead for the United States… END_OF_DOCUMENT_TOKEN_TO_BE_REPLACED

After initially refusing to provide details, the Pentagon on Tuesday confirmed that a Chinese jet made an unsafe pass near a U.S. RC-135 surveillance jet last week.

“I can confirm for you that the department’s reviewing a report that came in from [U.S. Pacific Command] regarding a Sept. 15 intercept of a U.S. RC-135 by an aircraft from the People’s Republic of China,” Pentagon Press Secretary Peter Cook told reporters. END_OF_DOCUMENT_TOKEN_TO_BE_REPLACED

Global Hawk long-range surveillance drones were targeted by the jamming in at least one incident near the disputed Spratly Islands, where China is building military facilities on Fiery Cross Reef.

Disclosure of the jamming came as a U.S. Navy P-8 surveillance flight on Wednesday was challenged eight times by the Chinese military to leave the same area. END_OF_DOCUMENT_TOKEN_TO_BE_REPLACED

A Chinese jet fighter flew dangerously close to a U.S. Navy P-8 anti-submarine warfare aircraft near Japan this week in an encounter that highlights China’s continued aggressiveness in the region.

The P-8, a new, militarized Boeing-737 anti-submarine warfare aircraft, was conducting routine surveillance of the Chinese coast over the East China Sea on Monday when the incident occurred, said U.S. defense officials familiar with reports of the encounter.

Pentagon spokesman Lt. Col. Jeffrey Pool had no immediate comment but said he would provide “an explanation of the event” on Friday.

The defense officials said the Chinese Su-27 interceptor jet flew within 50 feet of the P-8 and then carried out a barrel roll over the top of the aircraft—a move described by officials as dangerous and meant to threaten the surveillance aircraft. END_OF_DOCUMENT_TOKEN_TO_BE_REPLACED