A group of heavily armed former Venezuelan soldiers, led by a retired general, reportedly planned to use armed force to push back National Guard troops loyal to President Nicolas Maduro who were blocking aid shipments from crossing the border from Colombia. END_OF_DOCUMENT_TOKEN_TO_BE_REPLACED

Russia has reportedly doubled down on its support for Venezuelan President Nicolas Maduro by sending “security contractors” to Caracas to provide protection for the dictator. END_OF_DOCUMENT_TOKEN_TO_BE_REPLACED

Reports on the ground say smaller-scale demonstrations that began on Jan. 21 began to spread on Jan. 22 with protests erupting in more than 60 neighborhoods across Caracas and in interior states. END_OF_DOCUMENT_TOKEN_TO_BE_REPLACED

“According to military envoys, Russian authorities have made a decision (and Venezuelan President Nicolas Maduro did not object) to deploy strategic aircraft to one of Venezuela’s islands in the Caribbean Sea, which has a naval base and a military airfield. Ten years ago, Russian experts and Armed Forces commanders had already visited the island of La Orchila, located 200 kilometers northeast of Caracas. Venezuelan laws prohibit the setup of military bases in the country, but a temporary deployment of warplanes is possible,” reported Russian state news agency TASS. END_OF_DOCUMENT_TOKEN_TO_BE_REPLACED

Venezuela has just taken the next step in its quest to “free” itself from the tyranny of US dollar hegemony. One year after the country said it would stop accepting US dollars as payment for its (ever shrinking) oil exports (saying the country’s state-run oil company would accept payment in yuan instead), Venezuelan Vice President for Economy Tareck El Aissami said Tuesday that Venezuela will officially purge the dollar from its exchange market in favor of euros. END_OF_DOCUMENT_TOKEN_TO_BE_REPLACED

Wray told the Senate Homeland Security committee that the FBI assesses that “given their retail availability, lack of verified identification requirement to procure, general ease of use, and prior use overseas, (drones) will be used to facilitate an attack in the United States against a vulnerable target, such as a mass gathering.” END_OF_DOCUMENT_TOKEN_TO_BE_REPLACED

Following his speech at the United Nations General Debate on Tuesday, President Donald Trump was asked about his comments regarding Venezuela and the recent levying of new sanctions against members of President Nicholas Maduro’s government and family. END_OF_DOCUMENT_TOKEN_TO_BE_REPLACED

Venezuelan President Nicolas Maduro was intoning something about economic renewal, flanked by his wife and a handful of high officials, in a country gripped by poverty, starvation, and shortages. Then, in a moment broadcast live on television that has since gone viral, his wife’s face changed. For an instant she seemed to duck as she reached for the official next to her; Maduro glanced up with apparent concern. The camera panned to the National Guardsmen in formation on the street before him as dozens suddenly started running. According to the government and witnesses, they had seen explosions in the sky. END_OF_DOCUMENT_TOKEN_TO_BE_REPLACED

Screen grab from video shows security detail shielding President Nicolas Maduro after what was reported by the Venezuelan government as a drone attack assassination attempt.

Venezuelan President Nicolas Maduro is likely to use what he said was an attempt on his life to purge his socialist government of disloyal officials and further restrict liberties, an analyst said.

Maduro’s government said the president survived an assassination attempt on Aug. 4, claiming explosions heard during a military event that was broadcast on live TV were drone attacks.

Three officials who spoke on condition of anonymity say the incident was actually a gas tank explosion inside a nearby apartment building, The Associated Press reported. END_OF_DOCUMENT_TOKEN_TO_BE_REPLACED

During a speech in which the power went out while he was on live television, Venezuela’s socialist president admitted his economic model has “failed.”

“The production models we’ve tried so far have failed and the responsibility is ours, mine and yours,” President Nicolas Maduro told his ruling PSUV party congress on July 30. END_OF_DOCUMENT_TOKEN_TO_BE_REPLACED

END_OF_DOCUMENT_TOKEN_TO_BE_REPLACED

Terrorists and other criminals are laundering $43 billion a year in the Tri-Border Area.

An Iranian-backed terrorist group is laundering money in the Tri-Border Area of Latin America, according to a report published Tuesday. Such illicit activities in the region straddling the intersection of Argentina, Brazil and Paraguay have long been a source of concern for United States security officials. END_OF_DOCUMENT_TOKEN_TO_BE_REPLACED 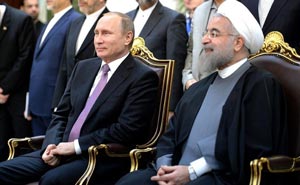 Iran and Russia just took a page out of Venezuela’s playbook.

Like Caracas announced on Dec. 4, Moscow and Tehran are looking into cryptocurrencies as a means of upending the U.S. petrodollar’s reign over the global oil market, Cointelegraph reported on Dec. 11.

For its part, crypto’s rise in popularity of late does make for an enticing investment choice, especially with Bitcoin’s 150% surge over the past month. END_OF_DOCUMENT_TOKEN_TO_BE_REPLACED