A day after Mohammad Javad Zarif announced his resignation on Instagram, the foreign minister of Iran is receiving support from members of parliament amid calls for the president not to accept his decision. END_OF_DOCUMENT_TOKEN_TO_BE_REPLACED

Iran’s top cleric and leader Ayatollah Khamenei has pointed the finger at the West for a terror attack on a military parade that took place early Saturday in the Southwest city of Ahvaz, which left 25 people dead and over 60 wounded.

Khamenei’s condemnation of “plots hatched by US stooges in the region” came simultaneous to Iran summoning the diplomatic envoys of Western countries including the Netherlands, Denmark and Great Britain, for harboring Iranian opposition groups in their countries.  END_OF_DOCUMENT_TOKEN_TO_BE_REPLACED

The Iranian government has urged Europe to “encourage” President Donald Trump to recertify the 2015 Joint Comprehensive Plan of Action, saying there is no “Plan B” should the nuclear agreement be terminated. END_OF_DOCUMENT_TOKEN_TO_BE_REPLACED

The Trump administration waived key sanctions on Iran’s main propaganda network last month, causing outrage among Iranian dissidents and administration insiders who tracked the effort to a little known Obama-era side deal with Iran that bars these sanctions from being implemented, according to multiple sources who spoke to the Washington Free Beacon. END_OF_DOCUMENT_TOKEN_TO_BE_REPLACED 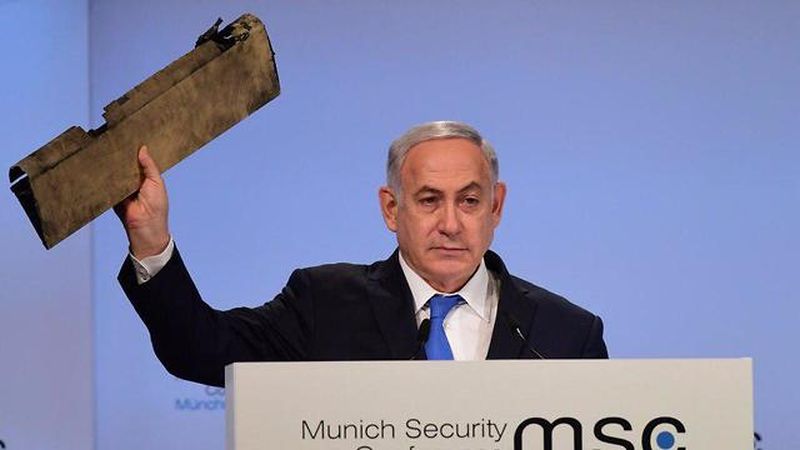 Prime Minister Benjamin Netanyahu told the Munich security conference on Sunday: “We will act if necessary not just against Iran’s proxies but against Iran itself, if needed.” Holding aloft a piece of the Iranian drone which Israel captured over its air space, he stressed that Tehran was the world’s greatest threat and “Israel will not allow the regime to put a noose of terror around its neck.” Taunting Iran’s’ foreign minister Mohammad Javad Zarif in the audience, he asked,” Do you recognize this? You should. It’s yours,” he said. “You can take a message back to Iran. Do not test Israel’s resolve.” This drone violated Israel’s sovereignty and posed a threat to our security, he said “We destroyed it and its control center in Syria.” END_OF_DOCUMENT_TOKEN_TO_BE_REPLACED

France’s President Emmanuel Macron declared Wednesday that the Iran nuclear deal is no longer a sufficient safeguard against the growing power that Tehran wields in its region.

“We need the 2015 accord,” he said of the agreement. “Is this accord enough? It is not, given the growing pressure that Iran is applying in the region.”

Macron was speaking in New York on the sidelines of the UN General Assembly, while ministers from Iran the six world powers that signed the accord met to discuss it. END_OF_DOCUMENT_TOKEN_TO_BE_REPLACED

WASHINGTON — Iranian Foreign Minister Mohammad Javad Zarif, at meetings in Oslo, Norway, this week, signaled that he has more authority on the Syria file than he has had until now, and that Iran may be prepared to show more flexibility to advance a political solution, sources who met with him there told Al-Monitor.

The apparent shift in Iran’s Syria policymaking comes as the Obama administration is facing internal criticism of its Syria policy, in the form of a dissent cable signed by some 50 State Department officers urging the United States to conduct airstrikes against the Assad regime in order to pressure it to make serious concessions at stalled political transition talks with the opposition in Geneva. The memo, first reported by The New York Times June 16, calls for “a judicious use of stand-off and air weapons, which would undergird and drive a more focused and hard-nosed US-led diplomatic process.” END_OF_DOCUMENT_TOKEN_TO_BE_REPLACED

In an October 30, 2015 interview with the Tasnim news agency, which is affiliated with the IRGC, Hossein Sheikholislam, an advisor to Iranian Majlis Speaker Ali Larijani, who is close to Iranian Supreme Leader Ali Khamenei, said that Tehran would continue defending the Assad regime. He stressed that Iran is coming to the Vienna talks about Syria as the “victorious” party, and that Iranian Foreign Minister Mohammad Javad Zarif will conduct himself in a manner “befitting the blood [shed by] the Iranian martyrs in Syria.” Sheikholislam added that Iran is not negotiating with the U.S. on Syria (in line with Khamenei’s orders), and that the U.S. and Saudi Arabia, which are the defeated parties, are not qualified to participate in negotiations about Syria’s future because they are the chief supporters of the terrorism there.  END_OF_DOCUMENT_TOKEN_TO_BE_REPLACED

Of course you’re not aware of it.

Brian (Behrooz) Nahed is son of Nooshin and Reza Vala Nahid of Los Angeles. Brian’s Persian birth name is “Behrooz Vala Nahid” but it is now shortened and Americanized in the media to “Brian Nahed.” At the time his engagement to Bradford Kerry, there was rarely any mention of Nahed’s Persian/Iranian ancestry, and even the official wedding announcement in the October 2009 issue of New York Times carefully avoids any reference to Dr. Nahed (Nahid)’s birthplace (which is uncommon in wedding announcements) and starts his biography from his college years. END_OF_DOCUMENT_TOKEN_TO_BE_REPLACED

Iran has said that its IR-8 centrifuges enrich uranium 20 times faster than the IR-1 centrifuges it currently uses. END_OF_DOCUMENT_TOKEN_TO_BE_REPLACED

The joint statement by Secretary of State Kerry and Iranian Foreign Minister Zarif that there will be no extension of the talks between the six powers and Iran past the most recent deadline of March 24th means only one thing: a deal has been reached between the U.S. and Iran, which will be announced to the other five participants when the Obama Administration decides it is convenient to do so.

This is the way this administration operates. END_OF_DOCUMENT_TOKEN_TO_BE_REPLACED

“Today we have slowly begun to draft the final agreement… but there are still many differences” over the text, the ISNA news agency quoted Zarif as saying from Vienna. END_OF_DOCUMENT_TOKEN_TO_BE_REPLACED

TEHRAN, Iran — Iran’s foreign minister said Wednesday that Washington’s “wishes are unlikely to come true” in talks between the Islamic Republic and world powers over its nuclear program, the government’s latest apparent attempt to deflect criticism from hard-line skeptics who say that President Hassan Rouhani will give up too much for too little in upcoming negotiations over a final comprehensive deal.

Mohammad Javad Zarif indicated the U.S. wanted Iran to give up major parts of its nuclear program but said such demands won’t be carried out. END_OF_DOCUMENT_TOKEN_TO_BE_REPLACED

Iran has bided their time from a weak Obama administration which has turned a blind eye, and even helped by negotiating a nuclear deal in which Tehran gives nothing up whereas the United States does. ICBMs were previously shot into space under the guise of science and uninterrupted enrichment of uranium has accumulated over time to a sufficient amount where they can produce a few nuclear weapons. In the distant future, perhaps they could mass produce. It’s past the point of no return, and while it’s not condoned here, war is the only viable option although questions remain how effective it will be and what repercussions will be faced.

Tehran has capacity to break out to bomb if it wishes, intelligence chief James Clapper tells Senate, but would be detected if it tried to do so

Iran now has all the technical infrastructure to produce nuclear weapons should it make the political decision to do, Director of National Intelligence James Clapper wrote in a report to a Senate intelligence committee published Wednesday. However, he added, it could not break out to the bomb without being detected.

In the “US Intelligence Worldwide Threat Assessment,” delivered to the Senate Select Committee on Intelligence, Clapper reported that Tehran has made significant advances recently in its nuclear program to the point where it could produce and deliver nuclear bombs should it be so inclined. END_OF_DOCUMENT_TOKEN_TO_BE_REPLACED