China sent fighter jets and other military aircraft near Taiwan Friday in the latest of a series of drills which Beijing has said are aimed at the island’s “independence forces”. 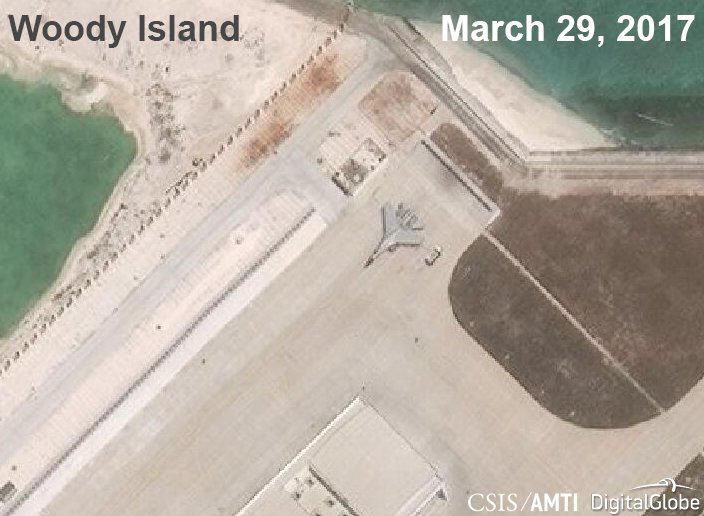 The Asia Maritime Transparency Initiative (AMTI), part of Washington’s Center for Strategic and International Studies, said the J-11 fighter was visible in a satellite image taken on March 29 of Woody Island in the Paracel island chain. END_OF_DOCUMENT_TOKEN_TO_BE_REPLACED

The mainland Chinese air force said on Thursday it would continue training and patrols in the air space over the East and South China seas, following recently intensified drills that have rattled Taiwan and Japan.

The People’s Liberation Army air force would keep training and patrolling the air space in accordance with its schedule, spokesman Shen Jinke said.

END_OF_DOCUMENT_TOKEN_TO_BE_REPLACED

Construction work on one of the reefs in the South China Sea. Photo: Centre for Strategic and International Studies

China appears to be building reinforced aircraft hangars on reclaimed islands it controls in a disputed area of the South China Sea, according to a US think tank.

Satellite photographs taken in late July show the construction of hangars on Fiery Cross, Subi and Mischief Reefs in the Spratly chain of islands and some have already been completed, according to a report by the Centre for Strategic and International Studies in Washington.

END_OF_DOCUMENT_TOKEN_TO_BE_REPLACED

During a Chinese television interview, the chief designer revealed that the air-to-air missile for the fifth-generation PL-10 is almost completed.

Weighing in at nearly 200 pounds, the 10-foot PL-10 features “world-class” capabilities. The missile has a range of 12 miles and it was in development for seven years, Defence Talk reported the missile’s designer Liang Xiaogeng as saying. END_OF_DOCUMENT_TOKEN_TO_BE_REPLACED

The tension caused by territorial disputes in the South China Sea seems unlikely to ease in the near future, given the almost-completion of Chinese runways on reclaimed land and Beijing’s possible deployment of J-11 fighter jets there, according to a Hong Kong newspaper report.

If China goes ahead, the deployment in the Spratly islands, which China and Taiwan call Nansha, “would dramatically extend the reach of the nation’s military beyond its southernmost base at Sanya on Hainan island,” said the June 21 report published in the English-language South China Morning Post, citing unnamed analysts. END_OF_DOCUMENT_TOKEN_TO_BE_REPLACED

In the coming years don’t be surprised if you start reading about Chinese (and Russian) superiority, then eventual capitulation because of a purged and degraded U.S. military. And as usual, as indicated in the last paragraph in this post, the American un-intelligent community is missing everything under the sun that their enemies are doing.

Yes, that’s the path the U.S. military is on. If you’re not concerned, you’re either not paying attention or there’s something wrong with your world view.

The enemies weapons are being sharpened and it’s only a matter of time, not if, before the sword comes to America as it continues to drop its guard and choose to instead follow the Kardashian developments.

The U.S. Air Force’s air power superiority over China is rapidly diminishing in light of rapid Chinese modernization of fighter jets, cargo planes and stealth aircraft, according to a recently released Congressional review.

The 2014 U.S.-China Economic and Security Review Commission recommends that Congress appoint an outside panel of experts to assess the U.S.-Chinese military balance and make recommendations regarding U.S. military plans and budgets, among other things.

The Commission compiled its report based upon testimony, various reports and analytical assessments along with available open-source information. The review states that the Chines People’s Liberation Army currently has approximately 2,200 operational aircraft, nearly 600 of which are considered modern. END_OF_DOCUMENT_TOKEN_TO_BE_REPLACED

China recently demonstrated its second fifth-generation stealth fighter, the J-31, for the 10th Zhuhai Airshow held in Guangdong from Nov. 11-16. Dave Majumdar, an American defense expert, thus suggests in Washington’s National Interest that the US must put the F-35 into service or develop new fighters to face this challenge. END_OF_DOCUMENT_TOKEN_TO_BE_REPLACED

Do you really think the Chinese are scared of America?

A Chinese naval vessel tried to force a U.S. guided missile warship to stop in international waters recently, causing a tense military standoff in the latest case of Chinese maritime harassment, according to defense officials.

The guided missile cruiser USS Cowpens, which recently took part in disaster relief operations in the Philippines, was confronted by Chinese warships in the South China Sea near Beijing’s new aircraft carrier Liaoning, according to officials familiar with the incident. END_OF_DOCUMENT_TOKEN_TO_BE_REPLACED

For those who have kept tabs on Chinese military advancements throughout the years, we are starting to see that their capability is quite advanced. One shouldn’t be surprised if they’re now on par with us or ahead.

China has test flown a second model of a prototype stealth fighter, aviation experts said Thursday, in a sign of its aircraft industry’s growing sophistication.

Photos posted to the Internet Thursday showed the radar-avoiding aircraft airborne near the northeastern city of Shenyang with its landing gear still down. Two Chinese-made J-11 fighters accompanied it on the flight, which Chinese military enthusiast websites said took place Wednesday and lasted about 10 minutes. END_OF_DOCUMENT_TOKEN_TO_BE_REPLACED