The SWIFT banking network, the backbone for international monetary transfers, said Monday it has suspended several Iranian banks from its service, after the United States reimposed nuclear sanctions on Tehran.

“In keeping with our mission of supporting the resilience and integrity of the global financial system as a global and neutral service provider, SWIFT is suspending certain Iranian banks’ access to the messaging system,” it said. END_OF_DOCUMENT_TOKEN_TO_BE_REPLACED

Treasury Secretary Steven Mnuchin said that unlike Obama’s 2013 Iran blockade, it would be harder for countries to get waivers on Iran oil sanctions as the US is already working on disconnecting Iran from the SWIFT network and dismissed concerns that oil prices could rise, saying the market had already factored in the output losses.

Speaking in an interview with Reuters in Jerusalem on Sunday at the start of a Middle East trip, Mnuchin said countries would have to reduce their purchases of Iranian oil by more than the roughly 20% level they did from 2013 to 2015 to get waivers. “I would expect that if we do give waivers it will be significantly larger reductions,” said the US Treasury Secretary. END_OF_DOCUMENT_TOKEN_TO_BE_REPLACED

Amid never ending talk and speculation over how many more barrels of Iranian oil will be removed from global markets once sanctions slated to hit Iran’s oil production on November 6 take effect, some are claiming that geopolitical factors have driven the market just as much as supply fundamentals.

At Russia Energy Week in Moscow last week, both Saudi and Russian energy ministers said they see rising geopolitical risk as driving the recent oil price increase at a time when there is sufficient supply in the market. Of course, the notion of sufficient supply will be tested soon, as will both Saudi Arabia’s and OPEC’s spare production capacity will be called on to maintain this supply. END_OF_DOCUMENT_TOKEN_TO_BE_REPLACED 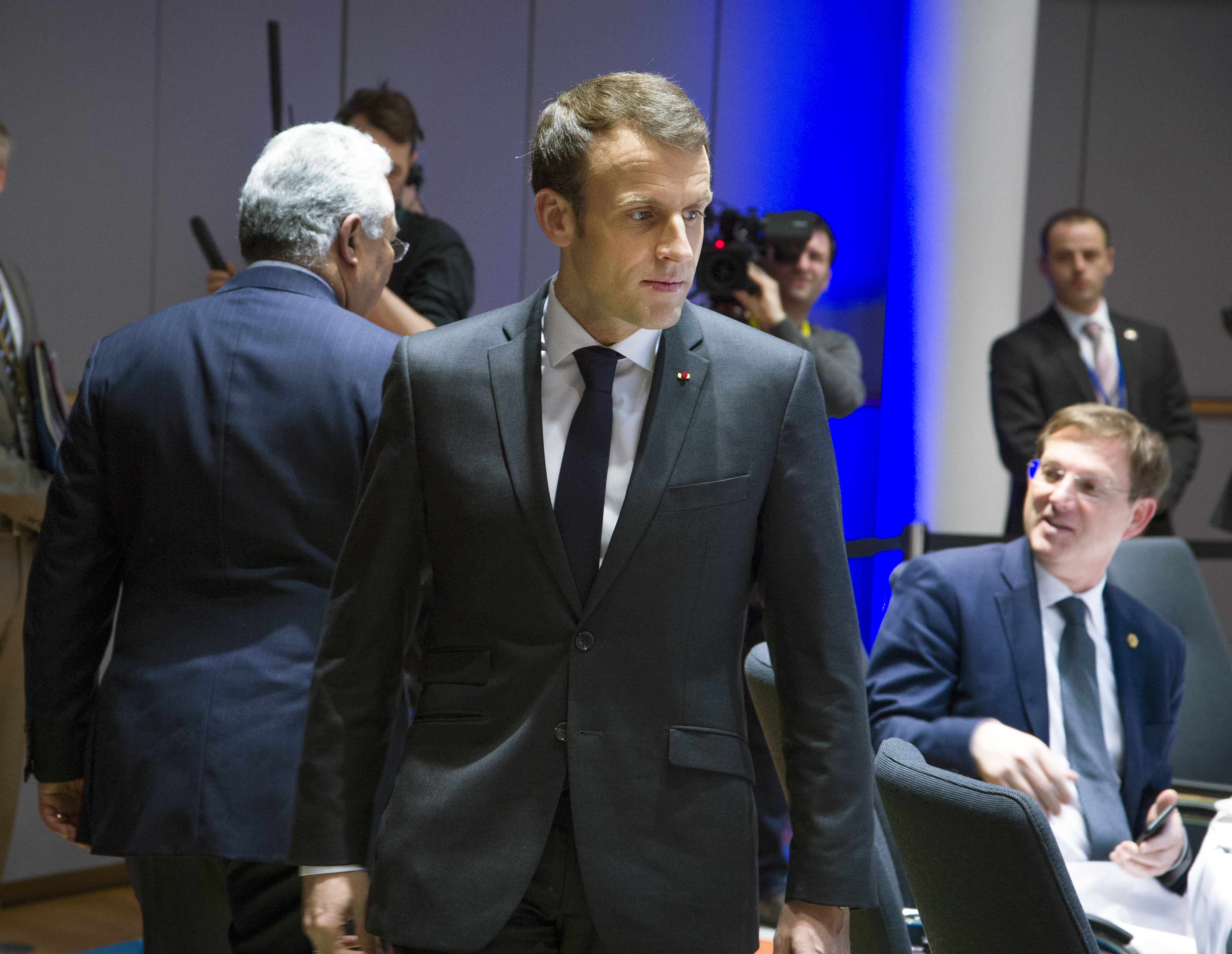 EU refused to be ‘pushed around by the unilateral decisions of our US allies’, France’s Emmanuel Macron said (Photo: Consilium)

The UN general assembly in New York, the world’s largest diplomatic event, turned into a show of EU solidarity with Russia and China against the US on Tuesday (25 September).

The development, which came about over Iran, symbolised a world-turned-upside-down by US leader Donald Trump’s unilateralism.

And with the US threatening to impose a new set of “crushing” sanctions on Russia, including in retaliation for the alleged Novichok nerve gas attack in the UK, Russia not only intends to continue liquidating its US holdings, but to significantly reduce its reliance on the US Dollar. END_OF_DOCUMENT_TOKEN_TO_BE_REPLACED

IDF Operations Chief Maj. Gen. Nitzan Alon was named to head it. He was with the chief of staff when he sat down with Gen. Joseph Dunford, Chairman of the US Chiefs of Staff, and Gen. Joseph Votel, head of CENTCOM in Washington. At 53, Alon accepted the post although he was ready to retire from the service after an impressive career spanning 34 years. It included valuable experience as commander of special operations forces and oversight of the integration of special undercover units in the intelligence corps for action behind enemy lines. He led several combat divisions before being promoted to OC Central Command. In 2015, he took over the General Staff’s Operations Branch. Eisenkott persuaded him to stay on as the first holder of a job just created of Director of the “Iran Project” – the IDF codename for a newly-established US-Israeli task force for executing potential decisions to attack Iran’s nuclear facilities, ballistic missiles and/or military bases in the Middle East. END_OF_DOCUMENT_TOKEN_TO_BE_REPLACED

“The Americans have claimed they want to completely stop Iran’s oil exports. They don’t understand the meaning of this statement, because it has no meaning for Iranian oil not to be exported, while the region’s oil is exported. The Americans say they want to reduce Iranian oil exports to zero… It shows they have not thought about its consequences.” END_OF_DOCUMENT_TOKEN_TO_BE_REPLACED

The European Union (EU) is considering switching to euros instead of U.S. dollars in the oil trade with Iran, Sputnik reported on Wednesday, quoting a diplomatic source.

Iran, for its part, said as early as in mid-April that it would be switching to euros from U.S. dollars in reporting foreign currency amounts, to reduce the reliance on the dollar as it was expected that President Trump would not waive the sanctions this time around.

The EU vowed on Tuesday to seek ways to work and trade with Iran. END_OF_DOCUMENT_TOKEN_TO_BE_REPLACED

The western province of Lorestan will be getting new attention from the Iranian oil ministry following the discovery of major shale oil reserves in the region, according to new reports emerging from the area.

Other research on the area’s shale gas reserves will be completed by October 2017, the official added. END_OF_DOCUMENT_TOKEN_TO_BE_REPLACED

Iran’s crude oil exports were 2.11 million barrels per day in August—up 15 percent from July exports, according to Reuters, citing someone with knowledge of Iran’s tanker loading schedule.

The figures lend credence to Iran’s promise to return to pre-sanction production levels, despite the OPEC (and Russia) meeting on September 26-28 in Algiers that many are hoping will end with a production freeze agreement in order to quell the price freefall. END_OF_DOCUMENT_TOKEN_TO_BE_REPLACED

China wants to deepen military ties with Iran, a senior Chinese admiral was quoted as saying on Thursday after a meeting with Iran’s defence minister in Tehran.

END_OF_DOCUMENT_TOKEN_TO_BE_REPLACED

WASHINGTON (Sputnik) — Iran will likely produce hundreds of thousands of barrels of oil daily by the end of next year once international sanctions on Tehran are fully lifted, the US Energy Information Administration (EIA) said in a report on Thursday.

“Iran is also expected to increase production as sanctions are lifted,” the agency’s report read. “EIA estimates that Iran has the technical capability to increase crude oil production by about 600,000 b/d by the end of 2016.”

END_OF_DOCUMENT_TOKEN_TO_BE_REPLACED

Obama’s ‘deal’ with Iran, giving them everything it wanted without restriction, is driving Israel into a corner where it will either have to strike or be struck. Now that the S-300 air defenses for Iran will be rolling in, the window of opportunity for successful first-strike capability is closing fast.

(Reuters) – Russia paved the way on Monday for missile system deliveries to Iran and started an oil-for-goods swap, signaling that Moscow may have a head-start in the race to benefit from an eventual lifting of sanctions on Tehran.

The moves come after world powers, including Russia, reached an interim deal with Iran this month on curbing its nuclear program.

The Kremlin said President Vladimir Putin signed a decree ending a self-imposed ban on delivering the S-300 anti-missile rocket system to Iran, removing a major irritant between the two after Moscow canceled a corresponding contract in 2010 under pressure from the West. END_OF_DOCUMENT_TOKEN_TO_BE_REPLACED

The US dollar’s position as the base currency for global energy trading gives the US a number of unfair advantages. It seems that Moscow is ready to take those advantages away.

Lately, China has led the BRICS efforts to dislodge the dollar from its position as the main global currency, but the “sanctions war” between Washington and Moscow gave an impetus to the long-awaited scheme to launch the petroruble and switch all Russian energy exports away from the US currency.

The main supporters of this plan are Sergey Glaziev, the economic aide of the Russian President and Igor Sechin, the CEO of Rosneft, the biggest Russian oil company and a close ally of Vladimir Putin. Both have been very vocal in their quest to replace the dollar with the Russian ruble. Now, several top Russian officials are pushing the plan forward. END_OF_DOCUMENT_TOKEN_TO_BE_REPLACED

Time and time again, history has proven that third-world economies have no bottom, no matter the amount or severity of sanctions. So long as China and Russia keep backing the Iranian regime, and as long as energy resources are in high demand world-wide, they will likely never be stopped without resorting to war.

“Under the current Iranian regime, the IRGC’s influence has grown within NIOC,” Treasury said on Sept. 24.