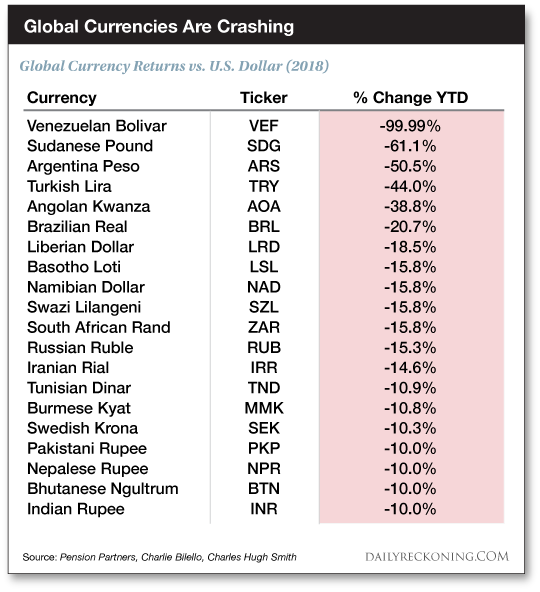 The “recovery”/Bull Market is in its 10th year, and yet central banks are still tiptoeing around as if the tiniest misstep will cause the whole shebang to shatter: what are they so afraid of?

The cognitive dissonance/crazy-making is off the charts:

On the one hand, central banks are still pursuing unprecedented stimulus via historically low interest rates, liquidity and easing the creation of credit on a vast scale. Some central banks continue to buy assets such as stocks and bonds to directly prop up the “market.” (If assets don’t actually trade freely, is it even a market?) END_OF_DOCUMENT_TOKEN_TO_BE_REPLACED

Merkel is simply out of her mind to adhere to this insane policy of a bail-in. How can hedge funds stay with clearing at Deutsche Bank when she takes this position that would set off a catastrophic global meltdown. It still appears that Merkel will have to blink. Once people realize this is the real crisis, then the German debt market should turn down rather hard. END_OF_DOCUMENT_TOKEN_TO_BE_REPLACED

ISLAMIC State (ISIS) is planning to unleash an army of “tens of millions” of extremist Muslim hackers on the West who will cause carnage worse than a NUCLEAR WAR, a computer expert and US Presidential hopeful has claimed.

John McAfee said the jihadis are hoping to take down the Internet and cause a global meltdown of services after developing a sophisticated mobile phone application which allows any of their warped followers to launch devastating cyber attacks.

The computer security expert, who invented the McAfee anti-virus software, claimed “fifteen to 25 percent” of the world’s 1.6 billion Muslims are extremists, meaning ISIS could have an army of 400 million fanatical followers ready to strike at any minute.