But I think there’s one shocking aspect — perhaps a larger story — that’s gone virtually unreported. It appears that anonymous intelligence officials are executing an operation against the sitting commander in chief. It might not qualify as all-out mutiny, but it’s also not all that far from one. END_OF_DOCUMENT_TOKEN_TO_BE_REPLACED

British spy chiefs have “genuine concern” about sources being exposed if classified parts of the wiretap request were made public, according to figures familiar with discussions.  END_OF_DOCUMENT_TOKEN_TO_BE_REPLACED

The drama surrounding the “dossier” by Steele and its unconfirmed information continues 17 months after the election as does the aggressive investigation by Special Prosecutor Robert Mueller. END_OF_DOCUMENT_TOKEN_TO_BE_REPLACED

The latest reports rolling in from Syria suggest that both the Assad regime and Hezbollah have evacuated weapons from likely targets, after CNBC revealed that the U.S. has selected 8 targets to strike, including two airfields, a research center and an alleged chemical weapons facility – after US officials told a reporter they were “fairly confident” the Syrian regime had been behind a gas attack in a rebel-held suburb of Damascus.

Mr. Assad was moving to protect his air force by moving planes to a Russian-operated base equipped with sophisticated air defenses, according to pro-regime media. –WSJ

END_OF_DOCUMENT_TOKEN_TO_BE_REPLACED 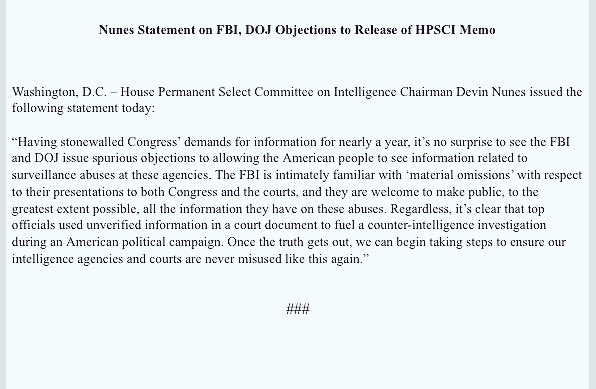 And along comes Reuters, dropping a bombshell headline that, if accurate, could shift the narrative of the multiple investigations involving Russia and obstruction of justice. END_OF_DOCUMENT_TOKEN_TO_BE_REPLACED

Want to drain the swamp? Expose Barack Obama, who he really is and the damage he has done.

Let’s start with President Trump’s allegation that the Obama Administration wiretapped the Trump Tower in October of 2016.

In summary, here is what we know.

In June 2016, the Obama Administration, using flimsy evidence of Russian connections to the Trump campaign, made an initial request for electronic surveillance of Trump and his associates under the Foreign Intelligence Surveillance Act (FISA) and its approval body the FISA court. END_OF_DOCUMENT_TOKEN_TO_BE_REPLACED

The request was denied. The Obama administration, though, persisted, according to reports. END_OF_DOCUMENT_TOKEN_TO_BE_REPLACED

Astute students of history understand that government agencies often further their own interests and not the administration they are designated to serve. Seldom is the genuine national security advanced when bureaucrats pledge their loyalty to their respective fiefdoms of projecting influence and power. Absent in this supremacy struggle equation is the abstract notion that state legitimacy is founded upon the will and consent of the people. Such a quaint concept does not reflect a chapter in the training manual that breeds the spooks who operate as above the law and unaccountable super spies.

Guarding signals traffic or capturing foreign communication is a logical task to protect national secrets, while gathering information on intentions and operations from adversaries. Once upon a time the National Security Agency directed the ECHELON project as a cold war network. Over the decades the functions of electronic surveillance broadened into collection on all forms of data, no matter the source or the national origin of the subject. END_OF_DOCUMENT_TOKEN_TO_BE_REPLACED