A great article for those who are still in the dark about cryptocurrencies. 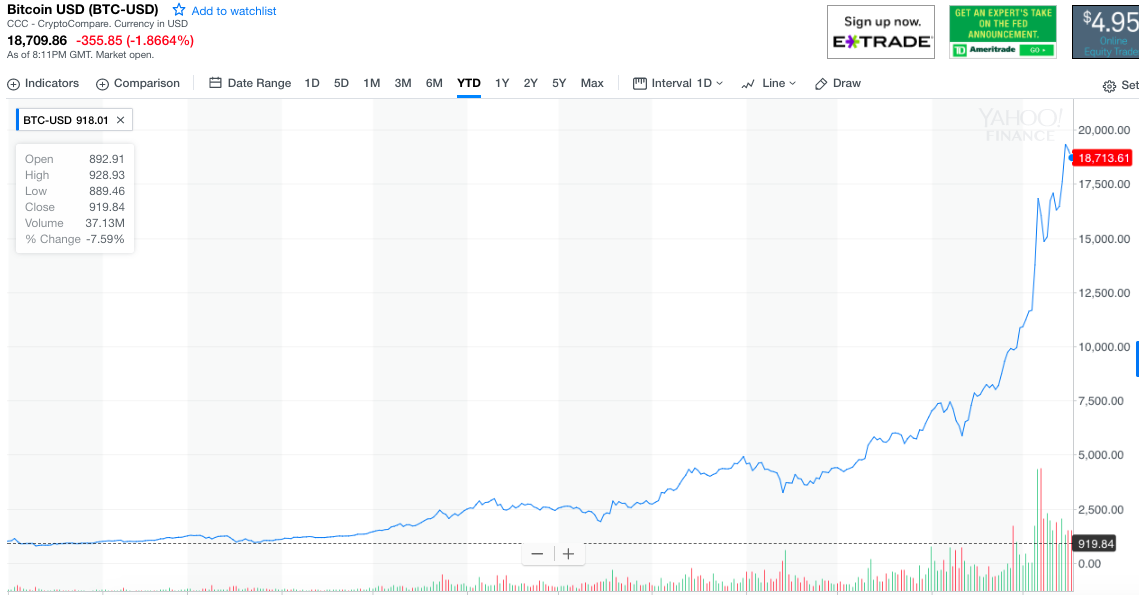 The price of bitcoin has rocketed more than 1,700% year-to-date.

With the price of the cryptocurrency soaring – and mainstream interest surging – Yahoo Finance recently invited readers to send us their top questions regarding bitcoin and other cryptocurrencies. We condensed questions from nearly 3,500 respondents into the list below, and enlisted a team of Yahoo Finance reporters to answer them, including Daniel Roberts, who’s been covering bitcoin since 2012, and Jared Blikre, our authority on trading. Ethan Wolff-Mann and Julia LaRoche contributed as well. Here’s everything you want to know about bitcoin:

1. What the hell is it? In the most general sense, bitcoin is software that forms a decentralized, peer-to-peer payment system with no central authority like the Federal Reserve or U.S. Treasury. It’s fair to call it a digital currency or cryptocurrency, but at the moment, most investors aren’t really using it as currency to pay for things. Instead, they’re using it as a speculative investment to buy in the hope of turning a profit. Maybe a big profit. (And maybe a big loss). END_OF_DOCUMENT_TOKEN_TO_BE_REPLACED

When discussing Blackrock’s latest quarterly earnings (in which the company missed on both the top and bottom line, reporting Adj. EPS of $5.24, below the $5.40 exp), CEO Larry Fink made an interesting observation: “While significant cash remains on the sidelines, investors have begun to put more of their assets to work. The strength and breadth of BlackRock’s platform generated a record $94 billion of long-term net inflows in the quarter, positive across all client and product types, and investment styles. The organic growth that BlackRock is experiencing is a direct result of the investments we’ve made over time to build our platform.” END_OF_DOCUMENT_TOKEN_TO_BE_REPLACED

Just within the past few days, three major high yield funds have completely imploded, and panic is spreading rapidly on Wall Street.  Funds run by Third Avenue Management and Stone Lion Capital Partners have suspended payments to investors, and a fund run by Lucidus Capital Partners has liquidated its entire portfolio.  We are witnessing a race for the exits unlike anything that we have seen since the great financial crash of 2008, and many of those that choose to hesitate are going to end up getting totally wiped out.  In case you are wondering, this is what a financial crisis looks like.  In 2008, other global stock markets started to tumble, then junk bonds began to crash, and finally U.S. stocks followed.  The exact same pattern is playing out again, and the carnage that we have seen so far is just the tip of the iceberg. END_OF_DOCUMENT_TOKEN_TO_BE_REPLACED

It’s relatively easy to portray yourself as a savvy and sucessful investor as well as being a ‘philantrophist’ when you bankroll the Presidency, have inside connections to the largest businesses in the world and enough money to almost destroy entire currencies such as the British Pound.

Soros Fund Management has doubled up a bet that the S&P 500  is headed for a fall.

Within Friday’s 13F filings news was the revelation that the firm, founded by legendary investor George Soros, increased a put position on the S&P 500 ETF by a whopping 154% in the fourth quarter, compared with the third. (A put or short position basically gives the owner the right to sell a security at a set price for a limited time, and in making such a bet, an investor generally believes the security is going to decline.) END_OF_DOCUMENT_TOKEN_TO_BE_REPLACED