Personnel is policy. The door to rapprochement is being nailed ever more firmly shut END_OF_DOCUMENT_TOKEN_TO_BE_REPLACED

BERLIN/DAMASCUS/MOSCOW(Own report) – The German government, after having applauded the bombing of Syria, is now demanding participation in the country’s reorganization, once the war has ended. Chancellor Angela Merkel announced her intentions to have a meeting with Russia’s President Vladimir Putin “in the foreseeable future,” to discuss particularly the development in Syria. The enormous costs for Syria’s reconstruction, which can hardly be covered by Russia alone, are viewed as a means of leverage on Moscow. Berlin also sees itself in a position to mediate between Russia and the USA in view of Washington’s threat to attack Russian positions in Syria. While the German government is going on the offensive to win influence, new foreign policy controversies are developing among the EU member states. In addition, questions are also being raised about the legitimacy of Saturday’s illegal air strikes: A renowned British journalist reported that doctors in Douma have doubts that chemical weapons had been used in that city on April 7. According to the OPCW, the research institute that had been bombed on Saturday had had nothing to do with poison-gas.

END_OF_DOCUMENT_TOKEN_TO_BE_REPLACED

Now that the “one and done” missile barrage against Syria’s purported chemical weapons program following the alleged gas attack in Douma is over, here are five consequences that need to be monitored in the weeks ahead. END_OF_DOCUMENT_TOKEN_TO_BE_REPLACED

The OPCW has been working in close collaboration with the United Nations Department of Safety and Security to assess the situation and ensure the safety of the team.  END_OF_DOCUMENT_TOKEN_TO_BE_REPLACED

If there is one thing the last 48 hours have proved to me, it’s this.  Donald Trump is no longer acting President. The coup against Trump has been completed.

I’m going to keep this simple. Follow the dots and try to keep up.

So there is nothing to contest now, and, in fact, there never was. The sovereign government of Syria long ago invited the Russians in and Washington out. Period. END_OF_DOCUMENT_TOKEN_TO_BE_REPLACED 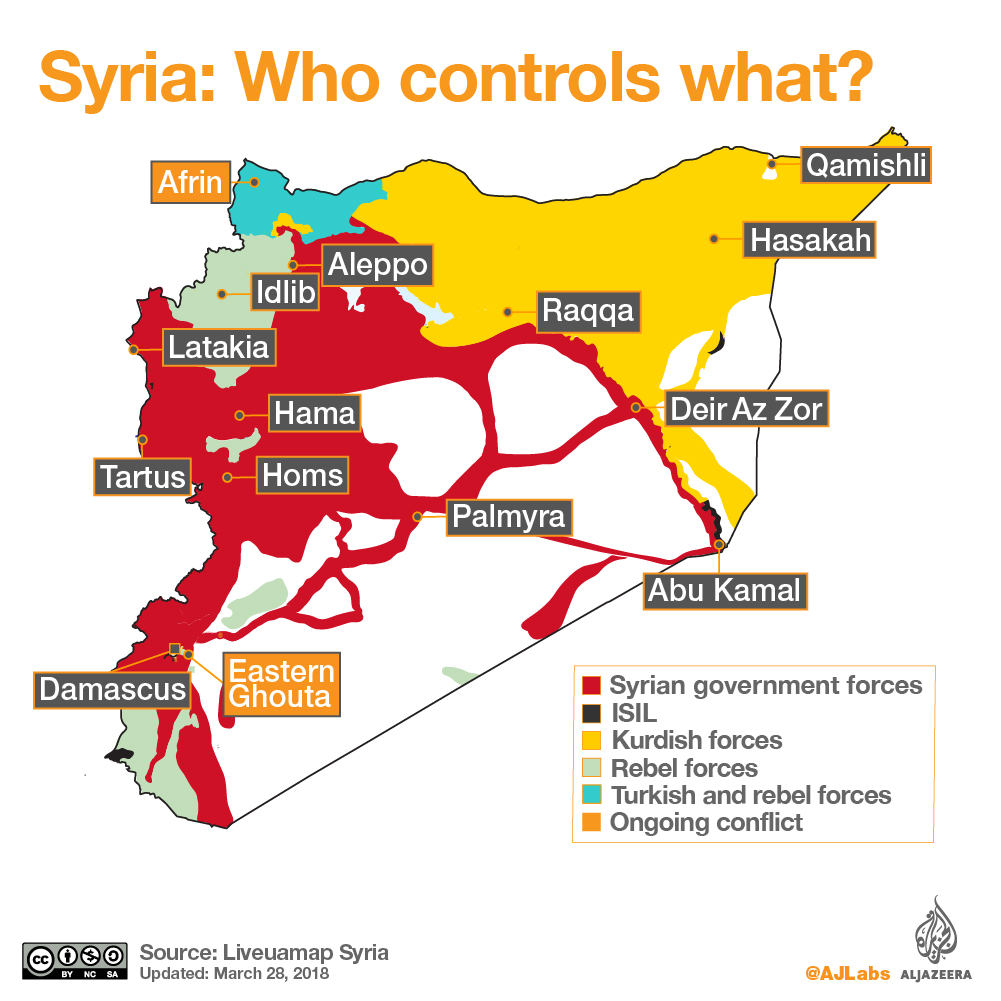 Folks, like some alien abductors, the Deep State has taken the Donald hostage, and with ball-and-chain finality. Whatever pre-election predilection he had to challenge the Warfare State has apparently been completely liquidated. END_OF_DOCUMENT_TOKEN_TO_BE_REPLACED

“In the past few days, we have seen an escalation towards a significant crisis.” END_OF_DOCUMENT_TOKEN_TO_BE_REPLACED

Aviation experts AirLive have reported this evening a “rapid alert notification” warning aircraft in the eastern Mediterranean to be wary of a sudden missile strike. END_OF_DOCUMENT_TOKEN_TO_BE_REPLACED

Bloomberg, however, reports that Trump is said to have not made a decision yet on Syria despite the fact that he canceled a trip to South America, citing the crisis in Syria.  END_OF_DOCUMENT_TOKEN_TO_BE_REPLACED

Moscow’s tone towards Israel turned hostile on Monday, April 9, after its claim that the IDF conducted an air strike on the Syrian T-4 airbase that morning. This claim was in itself a departure from the Kremlin’s longstanding line of letting Israel’s military operations pass without comment. Stepping away from this custom, the Russian Defense Ministry reported that two Israeli F-15 fighter jets carried out a guided missile air strike on the T-4 air base in Homs from Lebanese air space. Syria was said to have shot down 5 out of the 8 missiles fired, while three landed in the western part of the base. The Moscow statement stressed: “There were no Russian advisers among those injured” – 14 in all, according to some sources. END_OF_DOCUMENT_TOKEN_TO_BE_REPLACED