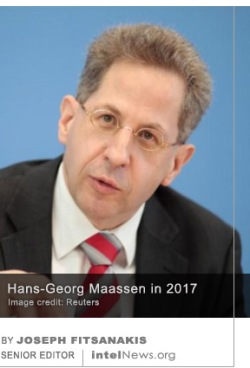 The head of Germany’s domestic intelligence agency has warned of security risks resulting from Chinese direct investment in high-technology German and other European companies. Since 2012, Hans-Georg Maassen has served as director of the Federal Office for the Protection of the Constitution, Germany’s domestic security and counterintelligence agency. Speaking to reporters on Wednesday, Maassen said his agency had noticed an inverse correlation between cyber-espionage attacks on Germany by Chinese actors and the acquisition of German technology firms by Chinese companies. German counter-intelligence officials were puzzled, he said, about a dramatic reduction in Chinese cyber-espionage activities in 2016. But they eventually realized that cyber-espionage operations had been replaced by “lawful methods”, he said, such as direct takeovers of German hi-tech firms by Chinese companies. END_OF_DOCUMENT_TOKEN_TO_BE_REPLACED

Yesterday, the WSJ reported that the Trump administration is planning to begin a probe of what the U.S. sees as violations of intellectual property by China. Against a backdrop of Trump’s frustrations with domestic policy, sliding approval ratings and disagreement with China over North Korea, the chances of protectionist action are rising, as is the probability of a “hot”, retaliatory trade war. This morning ow learn when Trump is set to fire the first shot. Reuters reports, citing White House officials, that President Trump is expected to make a speech and sign a memorandum at the White House on tomorrow, Friday, that will target China’s intellectual property and trade practices, effectively firing the first shot in what could escalate into a major US-China trade war. END_OF_DOCUMENT_TOKEN_TO_BE_REPLACED

The railroad is one of a host of infrastructure projects China spearheads around the world in an ambitious quest to reinforce its emergence as the world’s next economic superpower while President Trump turns his back on globalization. END_OF_DOCUMENT_TOKEN_TO_BE_REPLACED

EXCLUSIVE: Paramount Pictures has made its most significant long-term alliance in China since Viacom chief Shari Redstone nixed a 49% stake sale to Dalian Wanda for $4.9 billion last year. The studio has closed deals with Shanghai Film Group Corp and Beijing-based Huahua Media for those companies to fund 25% or more of the studio’s entire film slate for the next three years, with an option for a fourth. END_OF_DOCUMENT_TOKEN_TO_BE_REPLACED

END_OF_DOCUMENT_TOKEN_TO_BE_REPLACED

The U.S. Department of Justice has charged six Chinese nationals with economic espionage and theft of trade secrets for allegedly accessing secret U.S. technologies and sharing them with universities and companies controlled by the Chinese government.

Unsealing an indictment filed last month, U.S. officials in Washington announced the charges Tuesday. The defendants, all Chinese nationals, include Hao Zhang, who is in custody, his fellow engineer Wei Pang and four other Chinese engineers and professors of stealing trade secrets from two U.S. technology companies, Skyworks Solutions and Avago Technologies. END_OF_DOCUMENT_TOKEN_TO_BE_REPLACED

Exactly what was mentioned here in extra commentary from a previous article is recognized by another major outlet. It’s the only way to make sense out of these moves. Globalizing a military in the name of protecting interests is how America did it, and now China is following in its footsteps to fill the power vacuum a suicidally declining USA is leaving in its wake.

It will only be a matter of time before the People’s Liberation Army gives China the ability to project “meaningful” force outside its immediate region, according to a commentary published in The National Interest, an American bi-monthly international affairs magazine.

China currently has no bases abroad, no long-range logistics capabilities and only rudimentary satellite coverage, Mastro said, but it does not mean that China cannot have these assets by the end of the decade if it is motivated. Before the turn of the century, few foresaw China possessing its own aircraft carrier or participating in global peacekeeping missions, but these things have already become reality, she added. END_OF_DOCUMENT_TOKEN_TO_BE_REPLACED

Company founded to blackmail US innovators could damage US economy

The Chinese regime is getting into the patent trolling business, having set up a company that will start suing American companies for patent fraud. Experts believe the new Chinese company, which the regime seeded with $50 billion in fluff patents, could be detrimental to American innovation.

Patent trolls, officially called patent assertion entities, are companies that produce no goods. They make their profits by buying vague and outdated patents, then suing other companies for violating their patents. According to a press release from the nonprofit Citizen Outreach, patent trolls cost the U.S. economy $29 billion a year and destroy jobs.

It was an interesting week last week. For one thing, Chinese company Alibaba debuted as the largest IPO in the history of the world. Larger than the Initial Public Offerings of Facebook, Twitter, Google, Apple, and Microsoft combined. At the same time, there was a Senate report indicating that China hacked U.S. military contractors in a significant way at least twenty times in the past year. In America, we celebrated the success of Wall Street, earning $300 million or so in underwriter fees. In China, they celebrated finding a path to dethrone American technology dominance (from the official Chinese News Agency): END_OF_DOCUMENT_TOKEN_TO_BE_REPLACED

Did Canada just sell out a huge chunk of its sovereignty?

Canada ratified a radical new trade agreement with China on September 12. According to critics, it puts both Canada’s resources and its ability to pass laws into the hands of a secret tribunal dominated by foreign judges.

Canadian International Trade Minister Ed Fast hailed the Foreign Investment Promotion and Protection Agreement (fipa) as a step in the right direction for Canada: “Investment agreements provide the protection and the confidence Canadian investors need to expand, grow and succeed abroad. We remain committed to opening new markets around the world for Canadian companies, including in the fast-growing Asia-Pacific region,” Fast said. “This fipa will create jobs and economic opportunities for Canadians in every region of the country.”

On the surface, this agreement looks great. Both countries are supposed to benefit. But in reality, Canada just gave away part of its sovereignty for nothing in return. END_OF_DOCUMENT_TOKEN_TO_BE_REPLACED

The start of the construction is planned for December 2014. Longer time slots had been proposed earlier. It is possible that adjustments have been made ​​following the probable participation of Russian companies in the project. Given the confidentiality of negotiations, Peter Yakovlev did not reveal the names of the Russian companies participating in them. END_OF_DOCUMENT_TOKEN_TO_BE_REPLACED

In a book titled SELLING US OUT, J.R. Martin writes of Chinese companies “exploiting loopholes in the U.S.-China tax treaty signed by the Reagan administration in 1986.” He asks what the Founding Fathers would say about our current trade deficit, and our indebtedness to communist-ruled China. Martin asks, “What would Washington and Adams think about the corrupt and destructive power of the two major political parties in America? How would they judge today’s capitalism?” END_OF_DOCUMENT_TOKEN_TO_BE_REPLACED

Usually, one goes to college to learn a productive skill. A recently reported “fraud school” in China, however, fills a lucrative niche by teaching small companies how to fabricate their financial statements so they can enter U.S. capital markets and harvest millions of dollars from unsuspecting investors.

The school was featured in a Chinese newspaper article in early April. The piece, titled “Unmasking the Disaster of ‘China Concept’ Stocks,” refers to an unnamed fraud school that it says is under investigation by Chinese police. The author is listed as John Caines, whose affiliations are not stated. The newspaper that printed the article, Fortune Today, did not respond to an email enquiring about Caines’ identity.

The “fraud school,” which is actually an investment bank, counsels Chinese enterprises that want to make quick money on how to game the stock market in the United States, the article says. The elaborate system of fraud includes faking sales contracts, fabricating government filings, and massaging financial statements. These documents are then given an imprimatur of credibility with the help of a cooperative auditor. At this stage the company is still private, in China.