A China Railway Group-led consortium and XpressWest Enterprises LLC will form a joint venture to build a high-speed railway linking Las Vegas and Los Angeles, the first Chinese-made bullet-train project in the U.S.

Construction of the 370-kilometer (230-mile) Southwest Rail Network will begin as soon as next September, according to a statement from Shu Guozeng, an official with the Communist Party’s leading group on financial and economic affairs. The project comes after four years of negotiations and will be supported by $100 million in initial capital. The statement didn’t specify the project’s expected cost or completion date.

END_OF_DOCUMENT_TOKEN_TO_BE_REPLACED

THE carcasses of salmon, trout and more than a dozen other newly extinct native species lie in dry streambeds around California.

Exhausted firefighters in the Sierra Nevada battle some of the biggest wildfires they’ve ever seen. And in Central Valley farm towns, more and more parents hear the squeal of empty pipes when they turn on water taps to cook dinner.

A new report by the Public Policy Institute of California non-profit think-tank paints that distressing picture of California for the next two years if the state’s driest four years on record stretches further into the future. END_OF_DOCUMENT_TOKEN_TO_BE_REPLACED

Near California’s Success Lake, more than 1,000 water wells have failed. Farmers are spending $750,000 to drill 1,800 feet down to keep fields from going fallow. Makeshift showers have sprouted near the church parking lot. END_OF_DOCUMENT_TOKEN_TO_BE_REPLACED

FRESNO, Calif. — Vast areas of California’s Central Valley are sinking faster than in the past as massive amounts of groundwater are pumped during the historic drought, NASA said in new research released Wednesday.

The research shows that in some places the ground is sinking nearly two inches each month, putting infrastructure on the surface at growing risk of damage. END_OF_DOCUMENT_TOKEN_TO_BE_REPLACED

Stay tuned as this is sure to have a profound effect on America’s food supply. Over 80% of the world’s almonds are supplied by California.

(NaturalNews) As California’s drought worsens and the availability of potable water continues to decline quickly, regulators in the state have become increasingly strict in imposing rules and fines in order to conserve what water remains.

To do so, state drought regulators have gone to the extreme in recent days, proposing a first-of-its-kind fine of $1.5 million on a group of farmers they insist took water illegally. END_OF_DOCUMENT_TOKEN_TO_BE_REPLACED 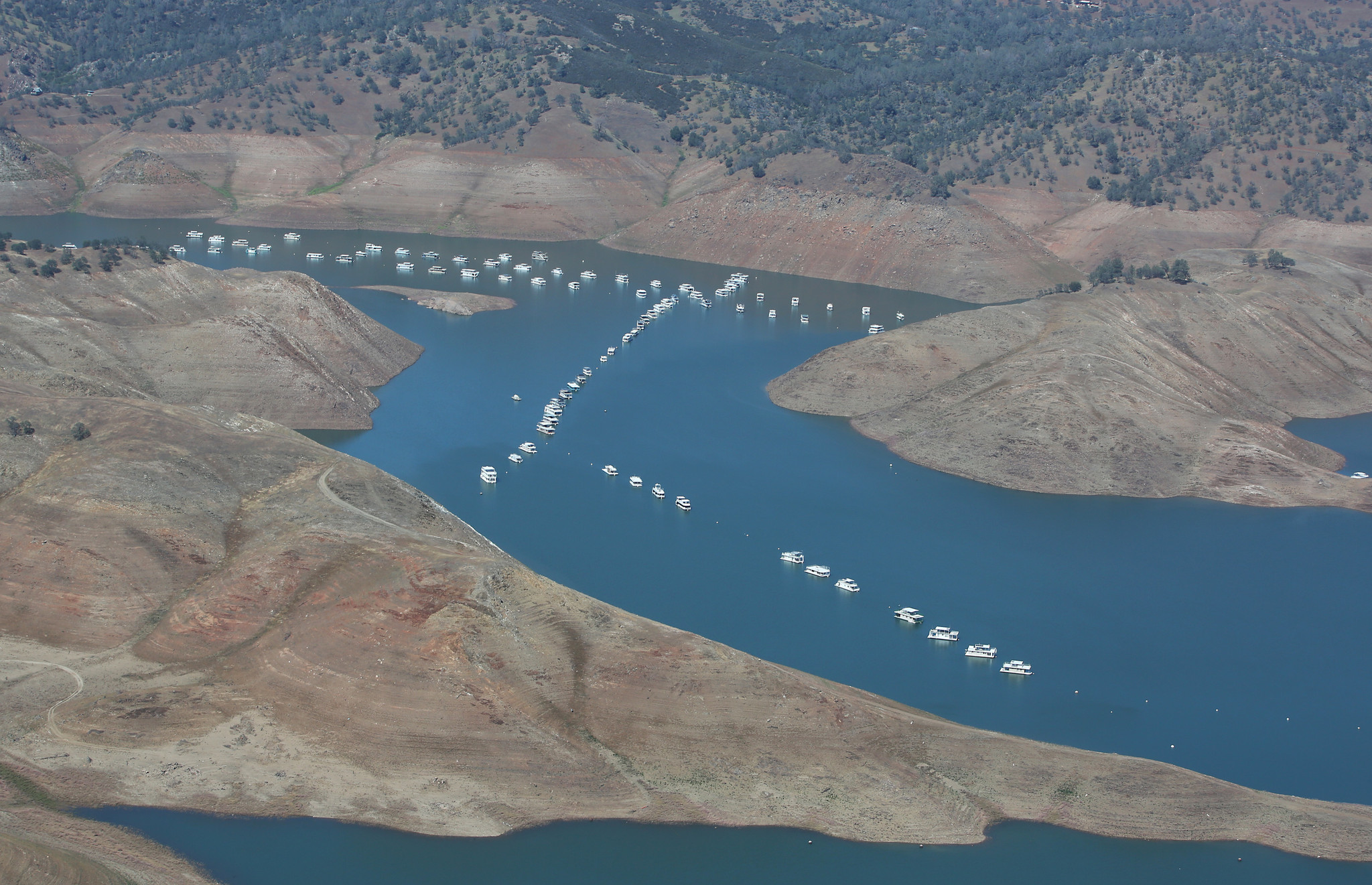 And as flows continue to decline this summer, board officials said, they expect to issue more curtailments, stopping river pumping by more senior diverters. END_OF_DOCUMENT_TOKEN_TO_BE_REPLACED

FRESNO (CBS SF) — California’s Central Valley is sinking at a rate never before seen during the state’s historic drought, and farmers are shouldering some  of the blame for the damage that sinking is causing.

Steve Arthur of Arthur & Orum Well Drilling is drilling wells as fast as his rigs will let him.

“It’s unbelievable.  We can’t keep up with the demand,” Arthur told KPIX 5. END_OF_DOCUMENT_TOKEN_TO_BE_REPLACED

Near California’s Success Lake, more than 1,000 water wells have failed. Farmers are spending $750,000 to drill 1,800 feet down to keep fields from going fallow. Makeshift showers have sprouted near the church parking lot.

“The conditions are like a third-world country,” said Andrew Lockman, a manager at the Office of Emergency Services in Tulare County, in the heart of the state’s agricultural Central Valley about 175 miles (282 kilometers) north of Los Angeles.

END_OF_DOCUMENT_TOKEN_TO_BE_REPLACED

In this photo taken Friday March 27, 2015, low-flow water emitter sits on some of the dry, cracked ground of farmer Rudy Mussi’s almond orchard in the Sacramento-San Joaquin Delta near Stockton, Calif.

FRESNO, Calif. (AP) — As California struggles with a devastating drought, huge amounts of water are mysteriously vanishing from the Sacramento-San Joaquin Delta — and the prime suspects are farmers whose families have tilled fertile soil there for generations.

A state investigation was launched following complaints from two large agencies that supply water to arid farmland in the Central Valley and to millions of residents as far south as San Diego.

At issue is California’s century-old water rights system that has been based on self-reporting and little oversight, historically giving senior water rights holders the ability to use as much water as they need, even in drought. Gov. Jerry Brown has said that if drought continues this system built into California’s legal framework will probably need to be examined. END_OF_DOCUMENT_TOKEN_TO_BE_REPLACED

Once upon a time, much of the state of California was a barren desert.  And now, thanks to the worst drought in modern American history, much of the state is turning back into one.  Scientists tell us that the 20th century was the wettest century that the state of California had seen in 1000 years.  But now weather patterns are reverting back to historical norms, and California is rapidly running out of water.  It is being reported that the state only has approximately a one year supply of water left in the reservoirs, and when the water is all gone there are no contingency plans.  Back in early 2014, California Governor Jerry Brown declared a drought emergency for the entire state, but since that time water usage has only dropped by 9 percent.  That is not nearly enough.  The state of California has been losing more than 12 million acre-feet of total water a year since 2011, and we are quickly heading toward an extremely painful water crisis unlike anything that any of us have ever seen before. END_OF_DOCUMENT_TOKEN_TO_BE_REPLACED

Three fault segments running beneath Northern California and its roughly 15 million people are overdue for a major earthquake, including one that lies northeast of San Francisco and near the dams and canals that supply much of the state’s water, according to a geological study published Monday.