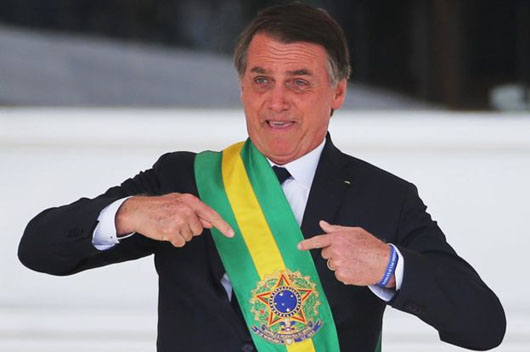 “Brazil will return to being a country free of ideological constrictions,” Bolsonaro said, later adding the nation would “start to free itself of socialism” and “political correctness.” END_OF_DOCUMENT_TOKEN_TO_BE_REPLACED

For the first time in more than two decades, Brazil has a right-wing politician as the head of state. But Bolsonaro’s victory signifies more than just a devastating defeat of the Worker’s Party (PT) — the victorious party in the last four presidential elections. It represents the arrival to power of the Brazilian “new right” (labeled by some as “far-right”), which they themselves describe as: “liberal” on the economy and socially conservative.

With his anti-establishment and anti-corruption rhetoric, the ex-military candidate Bolsonaro captured the dissatisfaction of the voters with the PT, the party of the ex-president Lula da Silva, who is imprisoned for corruption and money laundering. After 14 years in power, the Worker’s Party (PT) left behind a country morally, socially, and economically in crisis. Years of PT rule led to the biggest corruption scheme in the history of Latin America (known as Petrolão); an endemic economic crisis which drastically slowed the country’s development and left an unemployment rate of 13%; and one of the nation’s worst values crises in decades. END_OF_DOCUMENT_TOKEN_TO_BE_REPLACED

BERLIN/BRASÍLIA (Own report) – German business circles are placing high hopes on Brazil’s President-elect Jair Messias Bolsonaro pointing to the economic program of Paulo Guedes, designated to head a super ministry. During Augustino Pinochet’s military dictatorship, he was a professor at the University of Chile and his program resembles the economic policy of the Chilean Junta. Since about a year, Guedes has been Bolsonaro’s advisor. The Brazilian business community is hailing Bolsonaro, particularly the National Confederation of Industry (CNI), where German businesses hold strong positions. CNI is the Brazilian partner of the Federation of German Industries (BDI). German companies had already cooperated with the Brazilian military dictatorship. Bolsonaro’s victory is a deathblow to the policy of cautious redistribution in favor of impoverished segments of society, pursued by Presidents Lula da Silva and Dilma Rousseff. This policy was essentially ended with the May 2016 cold putsch – under applause of German business representatives.

END_OF_DOCUMENT_TOKEN_TO_BE_REPLACED

“We cannot continue flirting with socialism, communism, populism and leftist extremism … We are going to change the destiny of Brazil,” Bolsonaro said in an acceptance address, promising to root out graft and stem a tide of violent crime. END_OF_DOCUMENT_TOKEN_TO_BE_REPLACED

Following his speech at the United Nations General Debate on Tuesday, President Donald Trump was asked about his comments regarding Venezuela and the recent levying of new sanctions against members of President Nicholas Maduro’s government and family. END_OF_DOCUMENT_TOKEN_TO_BE_REPLACED 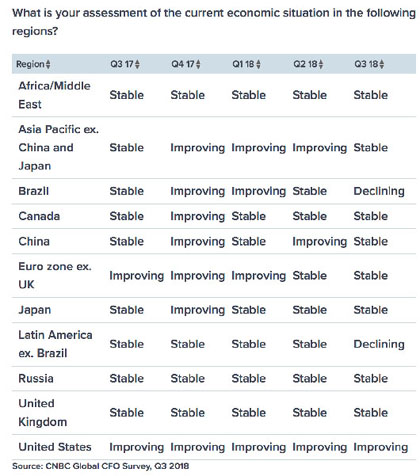 The latest quarterly score marks the fifth quarter in a row that the economy under President Donald Trump has been viewed as “improving” in the CNBC Global CFO Council survey. END_OF_DOCUMENT_TOKEN_TO_BE_REPLACED

But Western commentators have long underestimated that potential, forcing BRICS to demand greater representation in global-governance institutions. In 2011 and 2012, BRICS challenged the process of selecting leaders at the International Monetary Fund and the World Bank. But, lacking a united front behind them, a European (Christine Lagarde) and an American (Jim Yong Kim) continued to preside over those organizations. And though BRICS did get these institutions to reform their voting structures to give developing countries greater weight, the US and Europe still wield disproportionate power. END_OF_DOCUMENT_TOKEN_TO_BE_REPLACED

BERLIN/WASHINGTON (Own report) – The US-led RIMPAC 2018, the world’s largest naval maneuver, began yesterday with German soldiers participating. According to the US Navy, the naval exercise will also include operations in the Western Pacific. The region of the Southwest Pacific islands will thus come into focus, which – even though largely ignored by the European public – has been gaining significant global influence. On the one hand, the influence of Western countries has shrunk recently, while that of their strategic rivals, such as Russia and China, has significantly grown. Some Pacific island nations have since then been seeking to pursue a foreign policy independent from the West. On the other hand, the Southwest Pacific has become even more important also for Australia and the Unites States: as the political economic backyard for Australia and “gateway to the Indo-Pacific” for the U.S.A. Germany is also attempting to increase its activities in the region.

END_OF_DOCUMENT_TOKEN_TO_BE_REPLACED

Professor Niall Ferguson visited São Paulo in April to address Itaú’s annual MacroVision conference, and found time to sit down with Euromoney to talk fintech, social media and trade. In particular he focused on China and how it will impact Latin America’s future.

Euromoney meets with Ferguson later that day, a little uncertain about Ferguson’s range of knowledge and experience of Latin America. Such concerns were laid quickly to rest with Ferguson’s response to the opening question, which picked up on a point that he had made in his speech about the relative speeds of adoption of mobile payments in Asia (and China in particular) compared with the US. Could emerging markets in Latin America reach Asian levels of near-universal adoption of new payment technologies?  END_OF_DOCUMENT_TOKEN_TO_BE_REPLACED 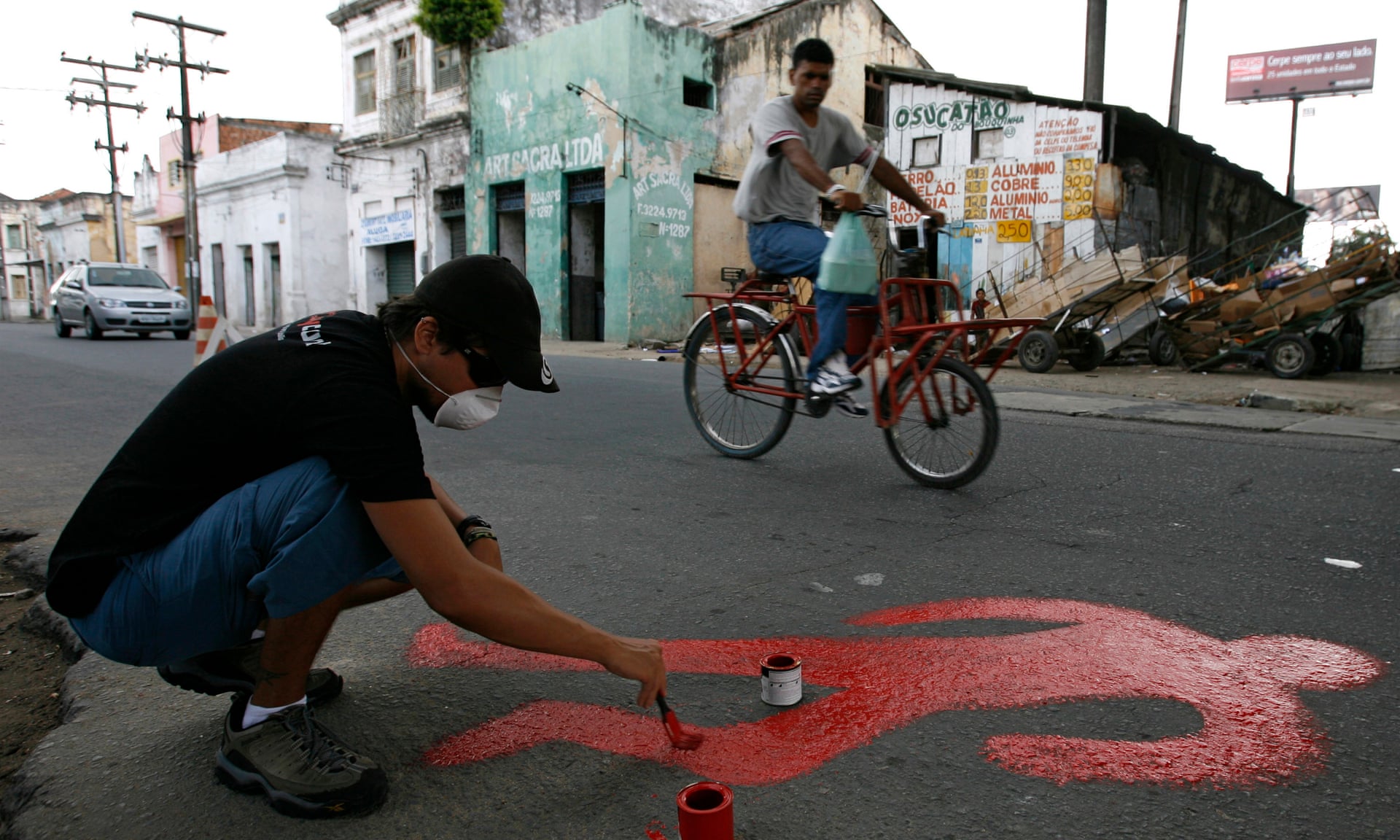 “The sheer dimensions of homicidal violence are breathtaking,” says the report by the Igarapé Institute, a Brazil-based think tank focused on security and development issues. END_OF_DOCUMENT_TOKEN_TO_BE_REPLACED

A two-year-old effort to allow the Russian military to rely solely on internal networks during wartime has apparently blossomed into support for a digitally isolated government and civil society as well, a top advisor to Vladimir Putin said this week. END_OF_DOCUMENT_TOKEN_TO_BE_REPLACED

Firstly, in his speech Shvetsov confirmed that the BRICS group of countries are now in discussions to establish their own gold trading system. As a reminder, the 5 BRICS countries comprise the Russian Federation, China, India, South Africa and Brazil. END_OF_DOCUMENT_TOKEN_TO_BE_REPLACED

The Russian government has revealed plans to develop an ‘independent internet’ that operates separately from the Domain Name System used worldwide. According to Russian news site RT, Russian President Vladimir Putin (pictured) is targeting August 1, 2018 for its completion

The Russian government has revealed plans to develop an ‘independent internet’ that operates separately from the Domain Name System used worldwide.

During a recent meeting of the Russian Security Council, officials discussed an initiative to create an alternative to the DNS, claiming the move could protect Russia and a handful of other nations in the event of a large-scale cyberattack. END_OF_DOCUMENT_TOKEN_TO_BE_REPLACED

Saudi Arabia was receiving dollars for their oil shipments, but they could no longer convert the dollars to gold at a guaranteed price directly with the U.S. Treasury. The Saudis were secretly dumping dollars and buying gold on the London market. This was putting pressure on the bullion banks receiving the dollar. END_OF_DOCUMENT_TOKEN_TO_BE_REPLACED