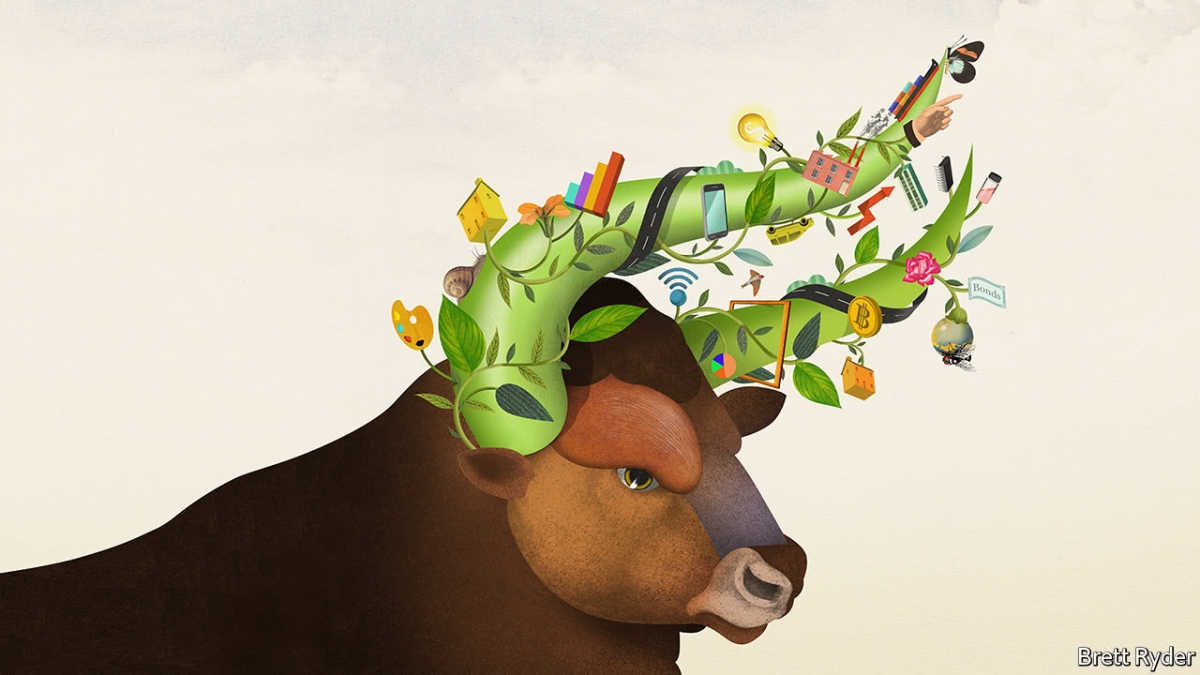 IN HIS classic, “The Intelligent Investor”, first published in 1949, Benjamin Graham, a Wall Street sage, distilled what he called his secret of sound investment into three words: “margin of safety”. The price paid for a stock or a bond should allow for human error, bad luck or, indeed, many things going wrong at once. In a troubled world of trade tiffs and nuclear braggadocio, such advice should be especially worth heeding. Yet rarely have so many asset classes—from stocks to bonds to property to bitcoins—exhibited such a sense of invulnerability. END_OF_DOCUMENT_TOKEN_TO_BE_REPLACED

Armstrong is a unique, contrarian thinker and has made a number of accurate forecasts over the years, especially since we’ve been speaking with him on our podcast. A key theme of his analysis is that economic growth is likely to remain stagnant as nations around the globe struggle with large debt burdens. However, rather than calling for a collapse in the dollar and the US stock market, as many bears have long predicted, Martin has taken the opposite view, focusing instead on the needs of institutional investors to earn yield by increasingly allocating capital into stocks and highly-rated corporate bonds, which helps to fuel the stock market higher. END_OF_DOCUMENT_TOKEN_TO_BE_REPLACED

In May 2015, U.S. federal prosecutors filed criminal indictments against fourteen FIFA employees and associates in connection with an investigation by the United States Federal Bureau of Investigation (FBI) and the Internal Revenue Service Criminal Investigation Division (IRS-CI) into wire fraud, racketeering, and money laundering which was all centered around bribery. Then 16 more officials were indicted in December 2015. We also see that Super Bowl viewership peaked in 2015 at 115 million and has begun to decline from a major 26-year high. Last year, Super Bowl viewership fell to 111 million, which is actually the Bearish Reversal. So if 2017 comes in under 111 million, this will confirm sports have begun a bear market. This is yet another parallel with the decline and fall of the Roman Empire. END_OF_DOCUMENT_TOKEN_TO_BE_REPLACED

As each day passes by, it looks like Germany will lead the world into economic collapse and bring the EU with it. However, this will not lead to a complete breakup of Europe, but a United States of Europe — Germany’s long-term ambition for decades. The crisis, be it economic or social, is leading to further integration within some member states, such as forging the creating of a European Army. The greatest heist of all time is under construction and destroying what we see as the EU today, in order to reshape it into the United States of Europe.

If you follow Bible prophecy and know of the great late David Wilkerson, you might give pause to think about what’s going on today, as his vision laid out in 1973.

It all started in mid/late 2014, when the first whispers of a Fed rate hike emerged, which in turn led to relentless increase in the value of the US dollar and the plunge in the price of oil and all commodities, unleashing the worst commodity bear market in history.

The immediate implication of these two concurrent events was missed by most, although we wrote about it and previewed the implications in November of that year in “How The Petrodollar Quietly Died, And Nobody Noticed.” END_OF_DOCUMENT_TOKEN_TO_BE_REPLACED

Prospect of the Islamic Republic pumping an additional 500,000 barrels a day sends stock markets in Dubai and Saudi Arabia into tailspin

Stock markets across the Middle East saw more than £27bn wiped off their value as the lifting of economic sanctions against Iran threatened to unleash a fresh wave of oil onto global markets that are already drowning in excess supply.

All seven stock markets in the Gulf states tumbled as panic gripped traders. London shares are now braced for a second wave of crisis to hit when they open on Monday morning after contagion from China sent the FTSE 100 to its worst start in history last week.

END_OF_DOCUMENT_TOKEN_TO_BE_REPLACED

Albert Edwards joins RBS in warning of a new crash, saying oil price plunge and deflation from emerging markets will overwhelm central banks, tip the markets and collapse the eurozone

The City of London’s most vocal “bear” has warned that the world is heading for a financial crisis as severe as the crash of 2008-09 that could prompt the collapse of the eurozone.

Albert Edwards, strategist at the bank Société Générale, said the west was about to be hit by a wave of deflation from emerging market economies and that central banks were unaware of the disaster about to hit them. His comments came as analysts at Royal Bank of Scotland urged investors to “sell everything” ahead of an imminent stock market crash. END_OF_DOCUMENT_TOKEN_TO_BE_REPLACED

The bull market is about to end, says UBS’ Julian Emanuel.

For months we’ve been warning of a stock market crash.

As the market drops 200 to 300 points daily on a fairly frequent basis these days, and has now dropped 13% in the last four months, John Hussman’s valuation analysis based upon historical facts is proving to be accurate. He’s not an “I told you so” type of person, but I am. The MSM stories follow the same old storyline – this is just a correction, time to buy the dip, stocks are undervalued, the Fed won’t let the market fall. We’ve been here before, twice in the last fifteen years. Wall Street and their media mouthpieces attempted to spread misinformation about the nature of the markets in 2000 and 2007, as epic bear markets were just getting underway. John Hussman cut through their crap then and he is cutting through it now. END_OF_DOCUMENT_TOKEN_TO_BE_REPLACED

Fasten your seat belts, this ride is getting interesting. Last week the Dow Jones Industrial Average was down more than 1,000 points, notching its worst weekly performance in four years. The sell-off took the Dow Jones down more than 10% from its peak valuations, thereby constituting the first official correction in four years. One third of all S&P 500 companies are already in bear market territory, having declined more than 20% from their peaks. Scarier still, the selling intensified as the week drew to a close, with the Dow losing 530 points on Friday, after falling 350 points on Thursday. The new week is even worse, with the Dow dropping almost 1,100 points near the open today before cutting its losses significantly. However, no one should expect that this selling is over. The correction may soon morph into a full-fledged bear market if the Fed makes good on its supposed intentions to raise interest rates this year. Have no illusions, while most market observers are quick to blame the sell-off on China, this market was given life by the Fed, and the Fed is the only force that will keep it alive.

END_OF_DOCUMENT_TOKEN_TO_BE_REPLACED

Richard Russell:  “As subscribers know, I wish the best for America and believe that America is the hope of the world. Yet there are a few things that worry me.

I believe the US economy is sinking into recession as described by John Williams of Shadow Statistics. I believe we are in a period of deflation and deleveraging. I am convinced that the Fed knows the economy is contracting and this is the reason that they have not yet raised rates. END_OF_DOCUMENT_TOKEN_TO_BE_REPLACED

Who is Robert Prechter, and why should investors care that he is warning them to be on high alert for a potential collapse in the stock market?

The president of Elliott Wave International, Prechter may not be a household name on Main Street, but he’s widely known on Wall Street as the foremost authority on the Elliott Wave principle, a forecasting methodology used by generations of technical analysts that is based on the belief that financial markets trend in five waves, and retrace in three waves….

Prechter is also the executive director of the Socionomics Institute, founded to study how those same wave patterns define changes in social mood and govern social events. END_OF_DOCUMENT_TOKEN_TO_BE_REPLACED

For five years, investor fear of risk has been drugged into somnolence by repeated injections of quantitative easing. The lack of fear has led to a world where price and risk have become estranged. As credit conditions are tightened in the US and China, the law of unintended consequences will hold sway in 2015 as investors wake up. The Vix, the so-called “fear index” that measures volatility, spiked to 18.4 on Friday, above the average of 14.5 recorded last year. END_OF_DOCUMENT_TOKEN_TO_BE_REPLACED

“Our biggest worry is the end of the liquidity cycle. The Fed is done. The reach for yield that we have seen since 2009 is going into reverse”, said Bank of America.

The Opec oil cartel no longer exists in any meaningful sense and crude prices will slump to $50 a barrel over coming months as market forces shake out the weakest producers, Bank of America has warned.

Revolutionary changes sweeping the world’s energy industry will drive down the price of liquefied natural gas (LNG), creating a “multi-year” glut and a mucher cheaper source of gas for Europe.

Francisco Blanch, the bank’s commodity chief, said Opec is “effectively dissolved” after it failed to stabilize prices at its last meeting. “The consequences are profound and long-lasting,“ he said.

END_OF_DOCUMENT_TOKEN_TO_BE_REPLACED

The Dubai stock market crashed today, with the main index falling over 6.5%, after being down 8% at one point. END_OF_DOCUMENT_TOKEN_TO_BE_REPLACED