US President Donald Trump’s declared recognition of Israeli sovereignty over the Golan on Thursday, March 21, had a time-sensitive object, unconnected to the Israeli election or Binyamin Netanyahu’s run for reelection, as his rivals contended. DEBKAfile’s military and intelligence sources reveal that it was an arrow aimed by the US president at Iran, Syria, Iraq and Hizballah, and the machinations plotted at Syrian President Bashar Assad’s meeting with Iran’s supreme leader ayatollah Ali Khameini on Feb. 25. Present at their meeting, our sources reveal, were two figures, Al Qods chief Qasem Soleimani, supreme commander of Iran’s Mid East fronts, and, for the first time, a high-ranking Hizballah military official, who is a senior strategic adviser to Hassan Nasrallah. END_OF_DOCUMENT_TOKEN_TO_BE_REPLACED

Al Qods Brigades, the Iranian Rev Guards’ external wing, “brought” Syrian ruler Bashar Assad to Tehran on Feb. 27, for an audience with supreme leader Ayatollah Ali Khamenei. This was revealed on Wednesday, March 6, by Al Qods deputy chief Brig.-Gen Esmaeil Qaani in an interview with Iranian media. Assad arrived alone without aides – a sign that he did not come voluntarily. And, indeed, Qaani also admitted that “his men accompanied Assad” all the way to Tehran, another sign that he was virtually snatched for the trip. DEBKAfile’s intelligence sources, who followed this revelation, discovered that Assad was bundled onto an Iranian plane and flown directly to a Revolutionary Guards air base in western Tehran. The only official on hand to receive the Syrian president was Al Qods chief Gen. Qassem Soleimani, who never left his side throughout the visit. END_OF_DOCUMENT_TOKEN_TO_BE_REPLACED

A day after Mohammad Javad Zarif announced his resignation on Instagram, the foreign minister of Iran is receiving support from members of parliament amid calls for the president not to accept his decision. END_OF_DOCUMENT_TOKEN_TO_BE_REPLACED

Hizballah’s leader, Hassan Nasrallah, last week proposed that Iran re-arm the Lebanese army with new weapons including anti-air missiles. Zarif responded that Tehran is ready to assist Lebanon “in every field” – including the military sphere. He spoke in general terms, but DEBKAfile’s military sources report that, behind closed doors, the Iranian foreign minister offered the Lebanese army a set of Iranian Bavar 373 air defense missile systems, which are a close replica of the Russian S-300s deployed around military and nuclear sites across Iran. Iran nay decide against sending these missiles to Lebanon, lest they are destroyed by Israel, but the offer in itself is raising raised the military temperature around Lebanon. Quite simply, all the parties concerned are aware that the Lebanese government will decline this offer, because by closing the Iranian door they will open it to the start of Russian weapons supplies to Lebanon and Hizballah. Tehran has no objection to advanced weapons reaching Hizballah from Russia. The Iranians will claim that it is par for the course. Kurdish forces in Syria are armed by the Americans to fight Islamic State terror, and Hizballah is fighting the same foe. END_OF_DOCUMENT_TOKEN_TO_BE_REPLACED

Our sources can now reveal the nature of that presence and the process afoot for the gradual US withdrawal. In the last few days, Egyptian and UAE military officers visited the contested north Syrian town of Manbij. They toured the town and its outskirts, checked out the locations of US and Kurdish YPG militia positions, and took notes on how to deploy their own troops as replacements. On the diplomatic side, the White House is in continuous conversation with the UAE Crown Prince Sheikh Muhammed Bin Ziyad (MbZ) and Egyptian President Abdel-Fatteh El-Sisi. The deal Trump is offering, is that they take over US positions in Manbij, where the Kurds have sought protection against a Turkish invasion, and American air cover will be assured against Russian, Syrian or Turkish attack. END_OF_DOCUMENT_TOKEN_TO_BE_REPLACED 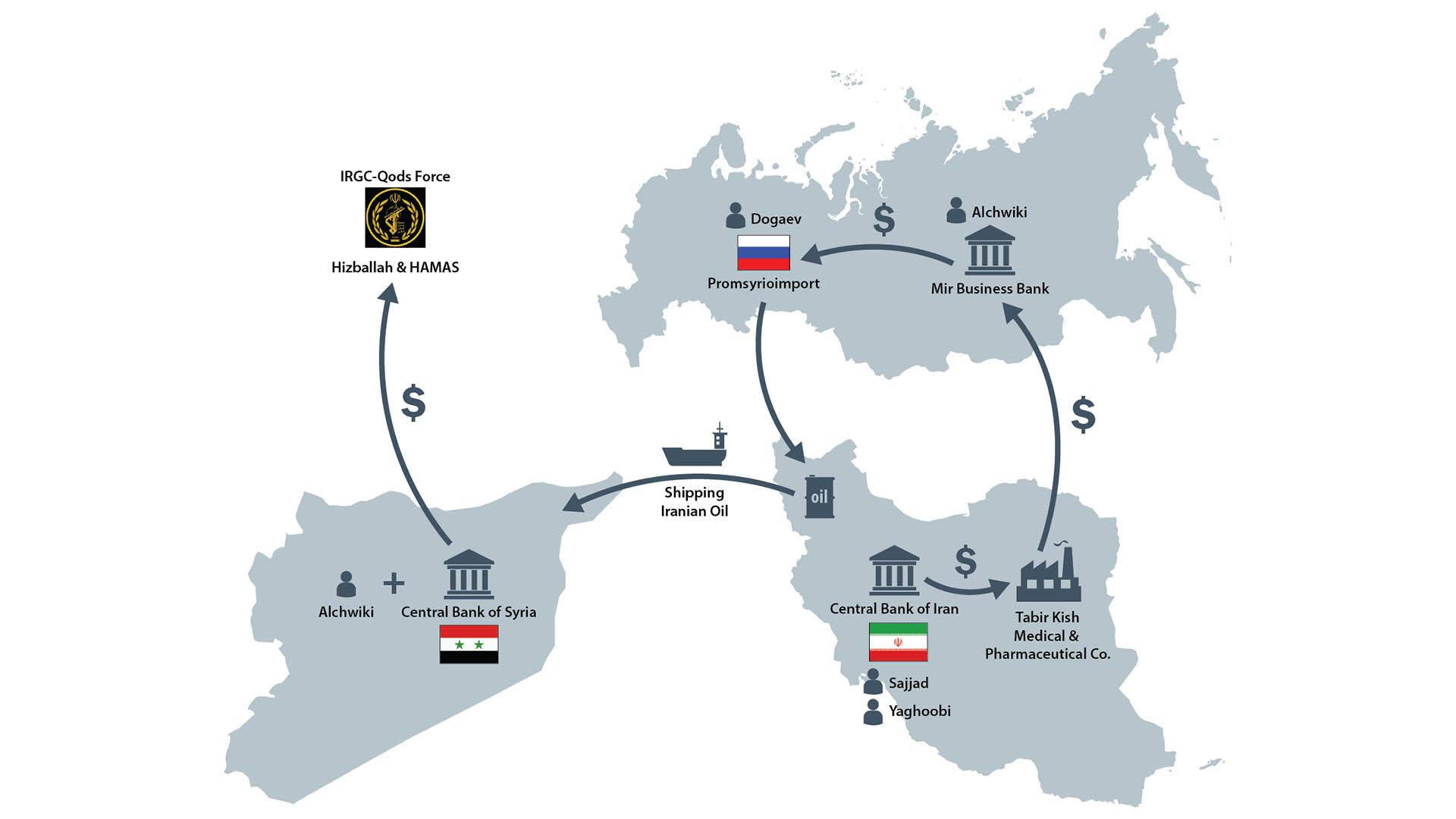 This afternoon, the Treasury Department’s Office of Foreign Asset Control laid out an elaborate network through which the Central Bank of Iran funneled cash through Iranian and Russian companies to buy Iranian oil that was then shipped to Syria for the purpose of propping up the Syrian government and the terrorist organizations Hezbollah and Hamas. END_OF_DOCUMENT_TOKEN_TO_BE_REPLACED

Unfolding Russian, US and Israeli military steps are raising the big power stakes in Syria on the eve of a Trump-Putin summit, DEBKAfile’s military sources report. Russian special forces have arrived and been attached to the Syrian military command in the southern Al-Safa region east of the Druze town of Sweida – officially as “advisers” to the Syrian offensive against ISIS, and markers of Islamist targets for Russian air strikes. Russia pulled those units out in June after helping Bashar Assad’s army capture rebel-held territory on Israel’s Golan and Jordan’s borders. Now, the Russians are attached to the Syrian Army’s elite 42nd Brigade-Ghiath Forces of the 4th Division. END_OF_DOCUMENT_TOKEN_TO_BE_REPLACED

Syria’s air defense electronic capacities will be boosted to level that of Russian forces in the country. But the most significant measure announced by Shoigu was: “Russia will jam satellite navigation, on-board radars and communication systems of combat aircraft, which attack targets in the Syrian territory, in the regions over the waters of the Mediterranean Sea bordering with Syria.” END_OF_DOCUMENT_TOKEN_TO_BE_REPLACED

Russian President Vladimir Putin will receive Turkey’s Tayyip Erdogan at Sochi on Monday for a final bid to get the joint Russian-Iranian-Syrian assault on Idlib, the last Syrian rebel holdout, underway. DEBKAfile’s military sources report that Putin was forced to back away from the operation last week when Turkey began delivering large quantities of heavy weapons to its proxy rebel groups in Idlib province. END_OF_DOCUMENT_TOKEN_TO_BE_REPLACED

An American battleship, the USS Bulkeley destroyer, has reportedly entered the Mediterranean and is headed for Syria, equipped with over 50 Tomahawk missiles. This deployment comes after previous reports of the attack submarine USS Newport News (SSN-750) arriving in the Mediterranean, and after the arrival Tuesday of A U.S. Marine Corps small attack carrier full of F-35B stealth jets, the USS Essex, in the Middle East region as detailed by the military website, Task and Purpose.

The Russian news agency Interfax now reports that American forces in the region possess up to 200 Tomahawk cruise missiles available to strike targets in Syria if ordered to do so. END_OF_DOCUMENT_TOKEN_TO_BE_REPLACED

Deal concluded by their defense ministers at a meeting in Damascus, Tasnim news agency says

Iran and Syria signed a deal for military cooperation in a meeting between the defence ministers of the two countries in Damascus, the Tasnim news agency reported on Monday. END_OF_DOCUMENT_TOKEN_TO_BE_REPLACED

Left against right. Citizens against police. Black versus white. Rich versus poor. The Russians play their cards well, especially with its influence within the American media.

As the Syrian regime army prepares to launch a campaign for the recapture of Idlib in northern Syria, the Chinese Ambassador to Damascus, Qi Qianjin, told the pro-regime daily Al-Watan on August 1, 2018 that the Chinese military would be willing to participate “in some way”  in the campaign in Idlib or in other parts of the country. The ambassador expressed his support for what he called Syria’s war against the terrorists, and noted that there is cooperation between the Syrian and Chinese armies. The report also quoted the Chinese military attaché in Syria as saying that the Chinese military wishes to enhance its relations with the Syrian military, and as expressing regret that Chinese Uyghurs are taking part in the fighting against the Assad regime. END_OF_DOCUMENT_TOKEN_TO_BE_REPLACED

A new report details the Pentagon’s growing alarm at increased instances of Russian electronic jamming attacks on American troop positions in Syria, which number according to public Pentagon statements at 2000 or more, located on and near a dozen or more “secret” bases mostly in Syria’s northeast and embedded among the mostly Kurdish US-backed Syrian Democratic Forces. END_OF_DOCUMENT_TOKEN_TO_BE_REPLACED