Iran’s top cleric and leader Ayatollah Khamenei has pointed the finger at the West for a terror attack on a military parade that took place early Saturday in the Southwest city of Ahvaz, which left 25 people dead and over 60 wounded.

Khamenei’s condemnation of “plots hatched by US stooges in the region” came simultaneous to Iran summoning the diplomatic envoys of Western countries including the Netherlands, Denmark and Great Britain, for harboring Iranian opposition groups in their countries.  END_OF_DOCUMENT_TOKEN_TO_BE_REPLACED

A top Iranian military commander has threatened to launch ballistic missile attacks on U.S. forces in the region amid a public effort by the Islamic Republic to show off its advanced missile capabilities, according to U.S. officials and regional reports.

Iranian leaders disclosed that their advanced ballistic missile technology, which could be used as part of a nuclear weapons program, is sophisticated enough to strike U.S. forces up to nearly 1,300 miles, or 2,000 kilometers, away, which encompasses all U.S. bases in the region. END_OF_DOCUMENT_TOKEN_TO_BE_REPLACED

From 1941 to 1979, Iran was ruled by Mohammad Reza Shah Pahlavi, better known as the Shah (meaning “king”). Pahlavi’s modernization and anti-Communist policies won the backing of many Western countries, which saw oil-rich Iran as a valuable ally in a tumultuous region. At the same time, though, his secularism and suppression of political opponents left him strongly disliked domestically.Pahlavi’s regime was ultimately overthrown in the 1979 revolution, led by Ayatollah Sayyid Ruhollah Mūsavi Khomeini. END_OF_DOCUMENT_TOKEN_TO_BE_REPLACED

“Nation building” seems to have fallen into disrepute in the West, but it should not. It is vitally important — as the successes of Germany, Japan and South Korea attest.

Over the past few years, in our foolishness, we in the Middle East swallowed the deceptive bait of “democracy” dangled before us, even though we knew that it could not, in the misguided way it was presented, be implemented in the Middle East. END_OF_DOCUMENT_TOKEN_TO_BE_REPLACED

“The access of inspectors from the International Atomic Energy Agency or from any other body to Iran’s military centers is forbidden,” Ali Akbar Velayati, Khamenei’s adviser for international affairs, said in an interview with Al-Jazeera satellite TV. Velayati further stressed that the directive will be enforced regardless of interpretations by the P5+1 world powers to the contrary. END_OF_DOCUMENT_TOKEN_TO_BE_REPLACED

debkafile’s Iranian sources report that Khamenei’s remarks reflect the struggle between the pro- and anti-nuclear deal factions at the highest level of the Iranian leadership. For now, President Barack Obama’s odds of less than 50 percent on a final accord may well describe the balance in Tehran.

On June 29, President Hassan Rouhani was planning to resign when he asked the supreme leader to receive him first. He was upset by Foreign Minister Mohamed Zavad Zarif’s recall from Vienna to Tehran for a tough briefing. Zarif had warned the president that the talks were doomed unless Iran gave some slack. The foreign minister said that the six foreign ministers were preparing to leave Vienna in protest against Iran’s intransigence. END_OF_DOCUMENT_TOKEN_TO_BE_REPLACED

Former Obama official Jeremy Bash spoke on CNBC regarding the recent failed talks with Iran, and how Iran came out the winner with a deadline extension.

As said before, watch what happens when Israel is backed into a corner. It is left no choice but to fight, and likely will preemptively for its existence.

Israeli official cites “sunset clause” in proposed comprehensive deal, which guarantees Iran a path into the nuclear club and may corner Israel into war.

WASHINGTON – Historic negotiations with Iran will reach an inflection point on Monday, as world powers seek to clinch a comprehensive deal that will, to their satisfaction, end concerns over the nature of its vast, decade-old nuclear program.

But reflecting on the deal under discussion with The Jerusalem Post on the eve of the deadline, Israel has issued a stark, public warning to its allies with a clear argument: Current proposals guarantee the perpetuation of a crisis, backing Israel into a corner from which military force against Iran provides the only logical exit.

END_OF_DOCUMENT_TOKEN_TO_BE_REPLACED 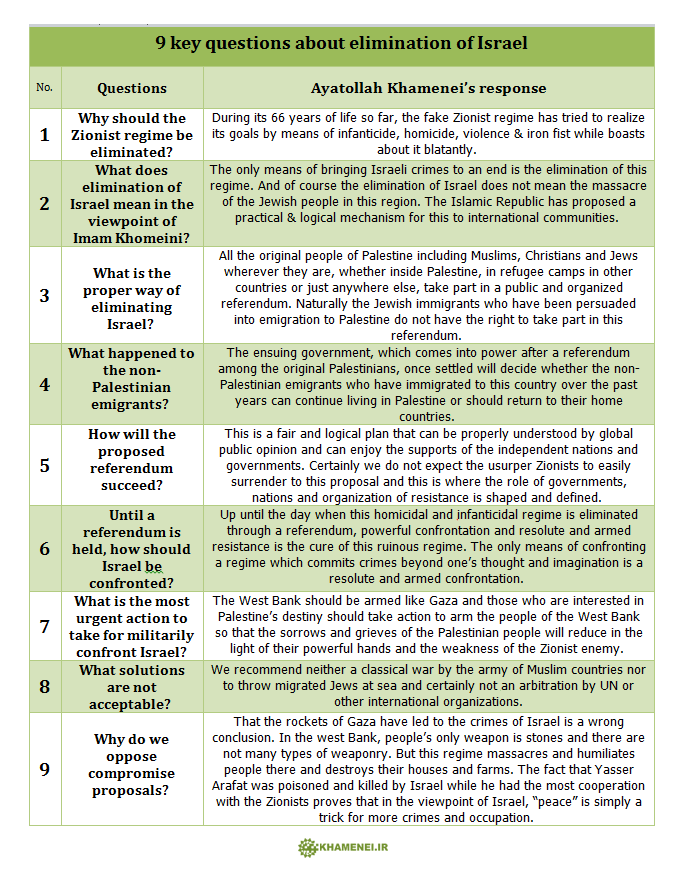 The sometimes grammatically awkward list explained the how and why of Khomeini’s vision for replacing Israel with a Palestinian state. END_OF_DOCUMENT_TOKEN_TO_BE_REPLACED

The Iranian military says that it has fully reverse engineered a downed U.S. drone and armed it with missiles “to attack the U.S. warships in any possible battle.”

The Iranian Revolutionary Guard Corps (IRGC) made the announcement on Sunday as Supreme Leader Ayatollah Khamenei toured an IRGC military compound to view the new drones, according to reports in Iran’s state-run media.

Iran also revealed over the weekend the existence of new ballistic missiles and an air defense system that can reportedly destroy multiple targets at once. END_OF_DOCUMENT_TOKEN_TO_BE_REPLACED

Barack Obama sent a secret message to Iranian Supreme Leader Ayatollah Khamenei recently. Obama told the regime leader that he would give them permission to pursue a nuclear energy program.
YNet News reported:

US President Barack Obama has signaled Tehran that the Washington would accept an civilian nuclear program in Iran if Supreme Leader Ali Khamenei can back up his recent claim that his nation “will never pursue nuclear weapons,” the Washington Post reported Friday.

According to the report, the verbal message was sent through Turkish Prime Minister Recep Tayyip Erdogan, who met with Khamenei last week. A few days prior to leaving for the trip, Erdogan held a two-hour meeting with Obama on the sidelines of the nuclear security summit in Seoul, in which they discussed what the Turkish leader would tell Khamenei about the nuclear issue.

Washington Post columnist David Ignatius wrote that Obama advised Tehran, via Edrogan, that time is running out for a peaceful agreement. Obama didn’t specify whether Iran would be allowed to enrich uranium domestically. The issue evidently is to be discussed during the talks between the Islamic Republic and the West, which are slated start on April 13 at a venue yet to be decided.

Last week I quoted from a book by Reza Kahlili, A Time to Betray. This week I had a chance to speak with Mr. Kahlili by phone, and ask him about the Iran crisis. As a former CIA operative who worked inside the Iranian Revolutionary Guard, he understands the strengths and weaknesses of the Islamic Republic.  He knows the Islamist mindset, and the errors that plague U.S. policy.

I asked Mr. Kahlili whether he thought a preemptive strike against Iran was a good idea. “The question is complex,” he answered. “You should never have allowed Iran to become what it is today. You have missed opportunity after opportunity.”

Perhaps it is no accident we are in such a difficult position today. Reza Kahlili is not alone in suggesting that the West has used bad judgment and shown poor leadership regarding Iran. To survive intact, our civilization must do better. We have deluded ourselves long enough. We have refused to accept that our enemies are enemies, that they intend our destruction. The hour is late, and time is running out.

To truly appreciate the political standing of Iran’s regular armed forces in today’s Islamic Republic, the key is to take into account the impact of the ongoing and unparalleled internal feud in the top ranks of the regime. The feud, pitching the factions of Supreme Leader Ayatollah ‘Ali Khamenei and President Mahmud Ahmadinejad against one another in a bitter contest for power, has turned the Artesh into an inescapable entity that neither faction can afford to ignore. Given, however, that Ayatollah Khamenei is the ultimate Commander-in-Chief in Iran’s constitutional setup, he appears to be succeeding in his attempts to shape the Artesh with the aim of further consolidating his grip on power in Iran.

As Khamenei has set out to appeal to Artesh commanders, as well as the rank-and-file, two developments are evident. First, the Artesh is increasingly idealized by the state-controlled media. This is a noticeable trend because the Islamist regime has largely sought to ignore or sideline the regular armed forces in the course of the 32-year history of the Islamic Republic. Instead, the Artesh is now periodically put in the front position when the regime in Tehran seeks to brandish its self-declared military capabilities. In contrast, up until recently the Artesh was rarely if ever given the chance to outshine the Islamic Revolutionary Guard Corps (IRGC), its politically-favored military counterweight.

Second, there are now a growing number of joint Artesh-IRGC military exercises and operations. This development in particular suggests that Khamenei’s efforts to bring the Artesh under his tutelage might go beyond merely rhetoric and public relations campaigns at the hands of state-run media.