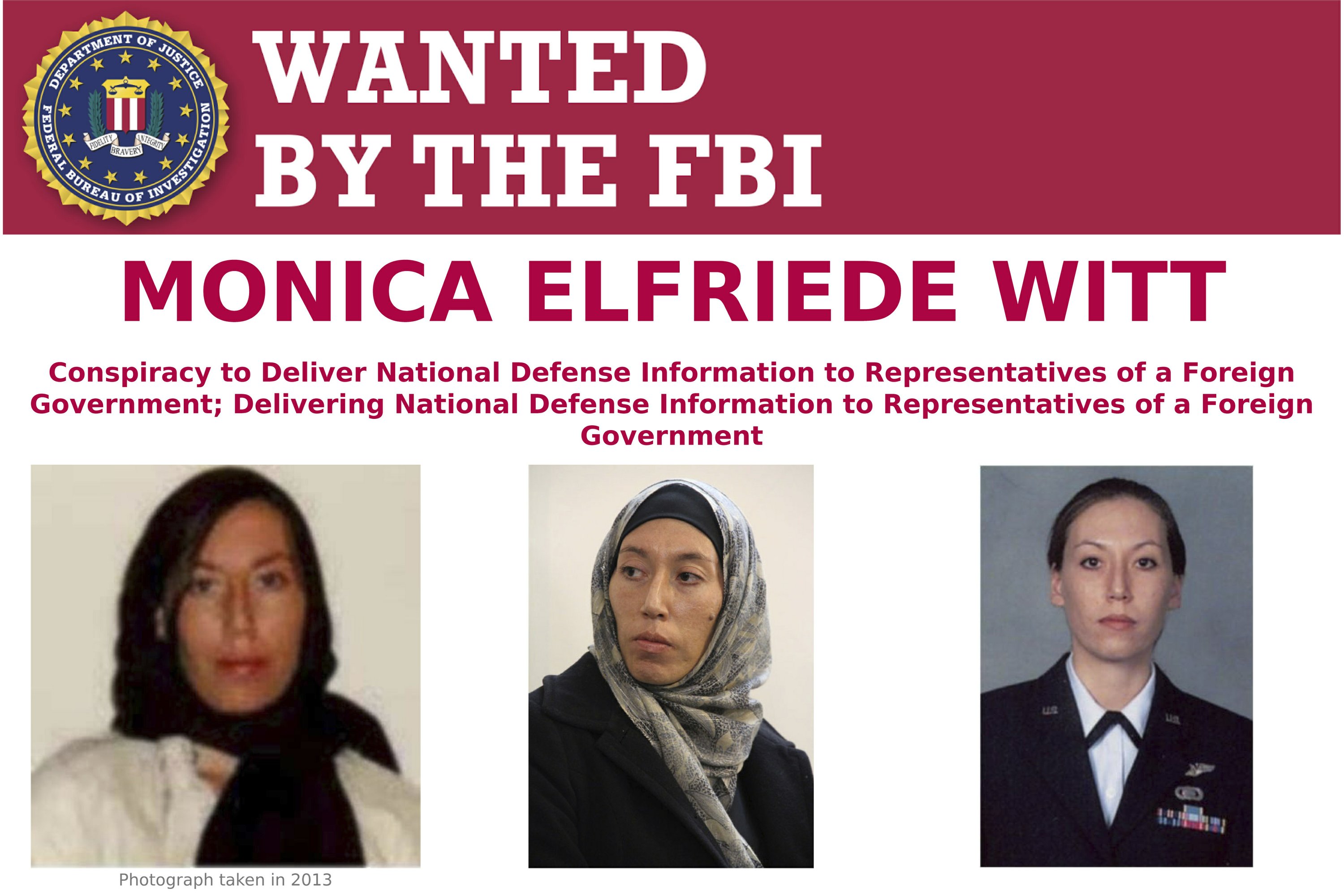 This image provided by the FBI shows part of the wanted poster for Monica Elfriede Witt. The former U.S. Air Force counterintelligence specialist who defected to Iran despite warnings from the FBI has been charged with revealing classified information to the Tehran government, including the code name and secret mission of a Pentagon program, prosecutors said Wednesday, Feb. 13, 2019. (FBI via AP)

WASHINGTON (AP) — A former U.S. Air Force counterintelligence specialist who defected to Iran despite warnings from the FBI has been charged with revealing classified information to the Tehran government, including the code name and secret mission of a Pentagon program, prosecutors said Wednesday.

The Justice Department also accused Monica Elfriede Witt, 39, of betraying former colleagues in the U.S. intelligence community by feeding details about their personal and professional lives to Iran. Four hackers linked to the Iranian government, charged in the same indictment, used that information to target the intelligence workers online, prosecutors said.

Witt had been on the FBI’s radar at least a year before she defected after she attended an Iranian conference and appeared in anti-American videos. She was warned about her activities, but told agents that she would not provide sensitive information about her work if she returned to Iran, prosecutors say. She was not arrested at the time.

“Once a holder of a top secret security clearance, Monica Witt actively sought opportunities to undermine the United States and support the government of Iran — a country which poses a serious threat to our national security,” said FBI executive assistant director Jay Tabb, the bureau’s top national security official.

Tabb said “she provided information that could cause serious damage to national security,” though he did not provide specifics.

Witt remains at large in Iran, as do the four hackers, who prosecutors say were acting on behalf of the country’s powerful, government-linked Revolutionary Guard. That group, a branch of Iran’s armed forces, has previously been designated by the U.S. government as a terrorism supporter.

The indictment was unsealed the same week as Iran celebrates the 40th anniversary of its Islamic Revolution and as the country denounced a Middle East security conference in Warsaw co-hosted by the U.S. and Poland. Officials said the indictment’s timing was unconnected to the meeting.

Witt served in the Air Force between 1997 and 2008, where she was trained in the Farsi language and was deployed overseas on classified counterintelligence missions, including to the Middle East. She later found work as a Defense Department contractor. The Texas native defected to Iran in 2013 after being invited to two all-expense-paid conferences in the country that the Justice Department says promoted anti-Western propaganda and condemned American moral standards.

The Treasury Department on Wednesday sanctioned the New Horizon Organization, which organized the conferences Witt attended and hosts events that American officials say promote Holocaust denial, conspiracy theories and also serve as a platform to recruit and collect intelligence from attendees.

Witt first traveled to a “Hollywoodism” conference in 2012, when she appeared in Iranian television videos in which she was identified as a former U.S. service member with critical views of America. She was then warned by FBI agents that she was a potential recruitment target for Iranian intelligence.

“She chose not to heed our warning that travel to Iran could potentially make her susceptible to recruitment,” Tabb said. “She continued to travel.”

Officials would not elaborate on why the indictment was brought six years after her detection, except to say they had to move classified intelligence into an unclassified format for use in a criminal case.

“Our intelligence professionals swear an oath to protect our country, and we trust them to uphold their oath. With good reason,” said Assistant Attorney General John Demers, the head of the Justice Department’s national security division. “But every great while, one of these trusted people fails us.”