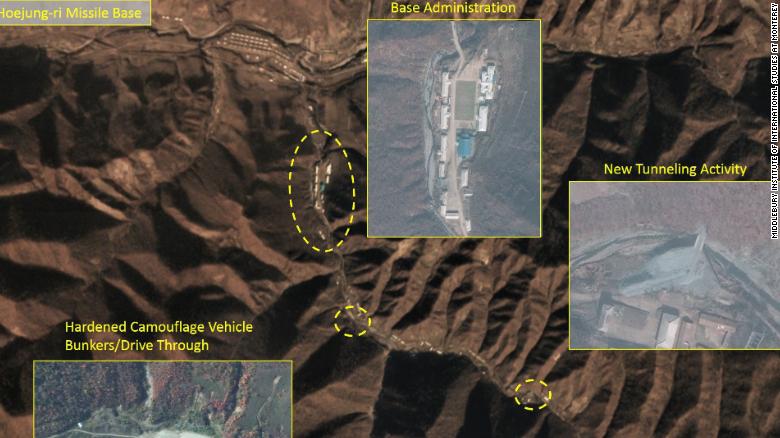 While the base at Yeongjeo-dong has long been known to US intelligence agencies and analysts, researchers at the Middlebury Institute of International Studies at Monterey told CNN that the images reveal construction on a new facility just seven miles away from the older site that had not been previously publicly identified.

‘The base remains active’

“Satellite images show that the base remains active. Moreover, in the past year North Korea has significantly expanded a nearby facility that appears to be another missile base,” the Middlebury Institute report states, noting that it is unclear whether the two bases are separate, or whether one is subordinate to other.

The images indicate that North Korea was building an extremely large underground facility in 2017 and that this facility was still under construction as of August 2018.

“Construction on the previously unidentified site has continued even after the Singapore Summit” between Kim and President Donald Trump in June, Jeffrey Lewis of the Middlebury Institute of International Studies at Monterey, one of the analysts that identified the site, told CNN. “Whatever Kim says about his desire for denuclearization, North Korea continues to produce and deploy nuclear armed missiles.”

The site’s unique location makes it a strong candidate to receive North Korea’s newest long-range missiles, including those that can carry nuclear weapons and can strike the United States, according to Lewis and his colleague David Schmerler.

US officials have long said they are not surprised by similar open source findings, but have declined to offer any additional response when other sites have been identified.

National security adviser John Bolton said Tuesday that Trump believes he should hold a second summit with Kim because the North Korean leader hasn’t lived up to commitments he made during their first meeting.

“They have not lived up to the commitments so far,” Bolton said at The Wall Street Journal’s annual CEO Council conference in Washington. “That’s why I think the President thinks that another summit is likely to be productive.”

Bolton said the US would press ahead with a second meeting shortly after the start of the new year — saying, “January, February” — in the hope of making further progress. He said the Trump administration would not lift hefty economic sanctions against the regime until then.

Trump has often touted North Korea’s lack of ballistic missile tests in recent months as a sign of diplomatic progress and said Kim’s offer to dismantle some testing facilities signals the North Korean leader is serious about denuclearizing.

But while Trump maintains that Kim committed to fully denuclearize during their summit in Singapore this summer, the truth is that the meeting only yielded a vaguely worded agreement, in which the two leaders pledged to build a “lasting and stable peace regime on the Korean Peninsula” and to “work toward complete denuclearization” of the peninsula.

The Trump administration has also continued to insist on the elimination of North Korea’s ballistic missile programs upfront — a nonstarter for a nation that remains deeply suspicious of the outside world and would never leave itself strategically vulnerable simply for the promise of economic gain.

While closing test facilities would make it harder for North Korea to develop new types of warheads, that step would do little to prevent Kim from continuing to mass produce and deploy existing types of nuclear-armed missiles, as he publicly said in January he would continue to do.

“Those missiles are being deployed at bases throughout North Korea, many of which have long been known to outside analysts. Any denuclearization agreement would require North Korea to allow international inspectors to determine that these units are no longer armed with nuclear weapons,” according to the report from Lewis and Schmerler.