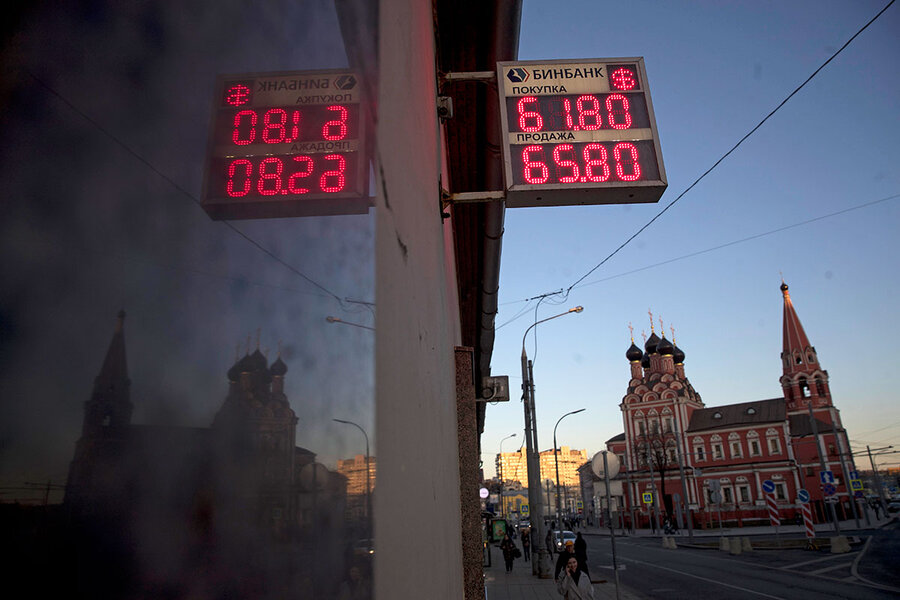 An exchange-office screen on a Moscow street shows the currency exchange rate of the Russian ruble and US dollar in April. The Kremlin has begun making moves to insulate the Russian economy from escalating US sanctions. (Pavel Golovkin/AP)

The dollar has long been the world’s reserve currency. But some countries, angered by sanctions, are challenging that status, potentially undermining one of the US’s most influential tools for shaping global policy.

For average Russians, a small personal hoard of US dollars has always represented a place of safety amid the wild ups-and-downs that continue to beset the country’s national currency, the ruble.

So it triggered a touch of panic among them when the Russian government confirmed long-standing rumors that it is working on a plan to insulate the economy from escalating US sanctions through “de-dollarization.”

The Trump administration has increasingly worked to weaponize the US dollar, by using its hegemonic position as the world’s “reserve currency” to punish any entity or country that attempts to defy proliferating unilateral US sanctions against Russia, Iran, and China. And the Kremlin is seizing what it sees as an opportunity to force the dollar out of its privileged position in global trade and finance.

The idea might have sounded quixotic a decade or so ago, when Russia and China first started talking about it. For advocates, it has a rousing rhetorical ring to it, but experts say it’s an extremely difficult reality to change in practice. Even Russia and China, the world’s leading anti-dollar activists, have so far only managed to shift about a quarter of their own $60 billion bilateral trade into other currencies.

But now the European Union has announced that it will create a special financial infrastructure to continue trading with Iran, despite the threat of “secondary sanctions” from Washington. It will have to be built from scratch, to effectively avoid any use of the US dollar or the global banks and financial circuits that fall under US regulation. The EU, whose own currency, the euro, is a potential contender to take the dollar’s place, has indicated that other signatories of the Iran nuclear deal, such as Russia and China, might have access to their new payment system for “legitimate” trade with Iran.

In the changing environment other countries, even India, which purchases weapons from sanctioned Russian companies, may find themselves looking for ways to circumvent the dollar and the US scrutiny that comes with it.

“Of course this plays into Putin’s hands, because anything that makes the US look like the enemy, with other countries supporting us, bolsters his public image,” says Andrei Movchan, economic policy expert with the Carnegie Center in Moscow. “But this is being driven by the threat that new sanctions, being prepared in Washington, would prohibit Russian banks from dealing in US dollars.”

“In fact, this whole discourse about sanctions and how to evade them is becoming permanent. And, in principle, switching to the use of other currencies is feasible; it wouldn’t be easy, and would impose a lot of new costs, but it can be done.”

Speaking to an international economic forum in Vladivostok last month, Vladimir Putin warned that US debt is a time bomb that threatens global stability, and it behooves everyone to get as far away from the dollar as possible as fast as they can. “US foreign debt amounts to $20 trillion. What will be next? Who knows?” he said.

‘No one wants to hold rubles’

But it’s easier said than done. Russia would like to be paid for its exports, especially oil, in a currency other than dollars. The new Russian government plan will reportedly offer tax incentives for Russian companies that do business abroad in rubles, which would boost the Russian currency and its international reputation.

Full article: An end to the dollar’s global hegemony? The Kremlin sees an opportunity. (The Christian Science Monitor)