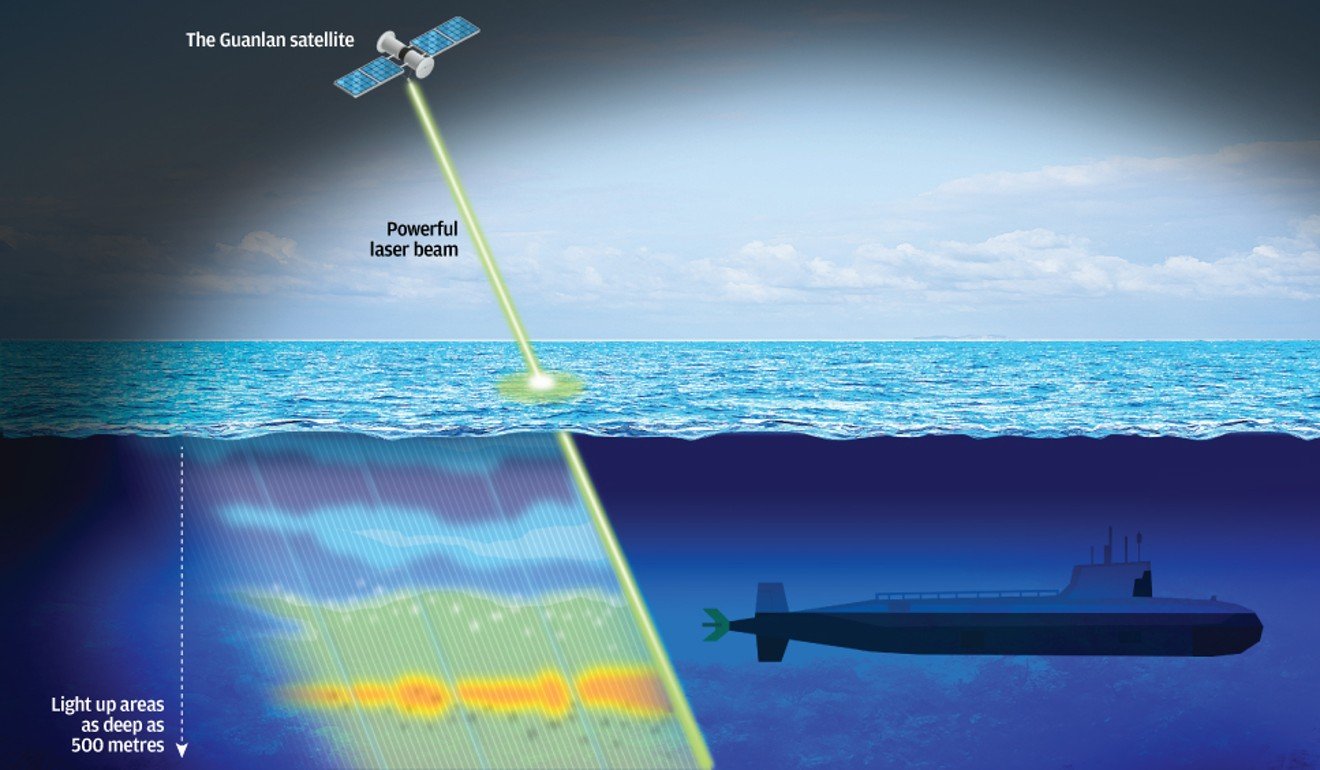 Project Guanlan, meaning “watching the big waves”, was officially launched in May at the Pilot National Laboratory for Marine Science and Technology in Qingdao, Shandong. It aims to strengthen China’s surveillance activities in the world’s oceans, according to the laboratory’s website.

Scientists are working on the satellite’s design at the laboratory, but its key components are being developed by more than 20 research institutes and universities across the country.

Song Xiaoquan, a researcher involved in the project, said if the team can develop the satellite as planned, it will make the upper layer of the sea “more or less transparent”.

“It will change almost everything,” Song said.

While light dims 1,000 times faster in water than in the air, and the sun can penetrate no more than 200 metres below the ocean surface, a powerful artificial laser beam can be 1 billion times brighter than the sun. But this project is ambitious – naval researchers have tried for more than half a century to develop a laser spotlight for hunting submarines using technology known as light detection and ranging (lidar).

In theory, it works like this – when a laser beam hits a submarine, some pulses bounce back. They are then picked up by sensors and analysed by computer to determine the target’s location, speed and three-dimensional shape.

Experiments carried out by the United States and former Soviet Union achieved maximum detection depths of less than 100 metres, according to openly available information.

That range has been extended in recent years by the US in research funded by Nasa and the Defence Advanced Research Projects Agency (DARPA). A device developed by DARPA, for example, was mounted on a spy plane and achieved reliable results at a depth of 200 metres, detecting targets as small as sea mines.

But some doubt whether the Chinese team will be able to go any further with its device.

“Five hundred metres is ‘mission impossible’,” said a lidar scientist with the Shanghai Institute of Optics and Fine Mechanics at the Chinese Academy of Sciences, who is not involved in the project.

Still, the government has agreed to fund the research – in part because the team has come up with an innovative approach that has not been tried before, according to a scientist involved in the project who was also speaking on condition of anonymity.

The device is designed to generate high-power laser beam pulses in different colours, or frequencies, that allow sensitive receivers to pick up more information from various depths. Those laser beams can scan an area as wide as 100km, or concentrate on one spot just 1km wide.

It will be used in conjunction with a microwave radar, also mounted on the satellite, to better identify targets. Although the radar cannot penetrate water, it can measure the surface movement with extremely high accuracy – so when a moving submarine creates small disturbances on the surface, for example, the radar will tell the satellite where to throw the laser beam.

Once it has been developed, the laser device is likely to be made by the Xian Institute of Optics and Precision Mechanics, Chinese Academy of Sciences in Shaanxi province. The institute gained attention recently for the lightweight laser weapons it is developing, particularly a device the size of an assault rifle that it claims can set fire to a target from nearly 1km away.

Zhang Tinglu, another researcher involved in the project, said the main target for the satellite was the thermocline – a thin layer of water where the temperature changes abruptly.

He declined to elaborate on the role of the satellite in anti-sub warfare, but the thermocline is known to be important for submarine captains because it can reflect active sonar and other acoustic signals. That means a vessel could potentially avoid detection in the thermocline, but not by a laser beam.

Song said the team aimed to use every available sensing method to achieve the maximum possible depth of detection.

“Sometimes there may not be enough light to reach 500 metres and back, but we can still try to work out what’s down there by taking an indirect measurement at a shallower depth,” he said.

The laboratory has yet to give any indication as to when the satellite will be ready, but Song said the team was under pressure. “There’s still heaps of problems that we need to solve,” he said.

China has been investing heavily in military hardware, including anti-submarine technology, as it grows increasingly assertive in the region and beyond.

Last year, Chinese scientists claimed to have made a breakthrough in magnetic detection technology with a device that can monitor tiny disturbances in the Earth’s magnetic field caused by metallic objects such as submarines.