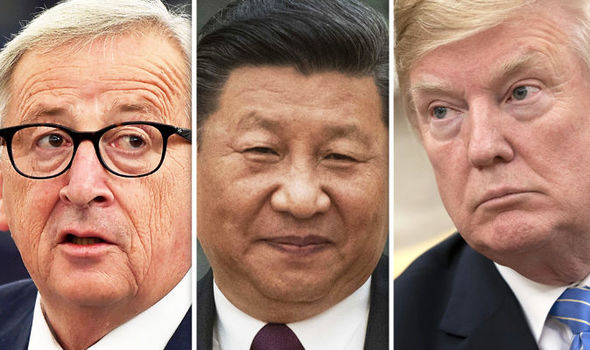 CHINA has asked to form an alliance with the EU against the US as the spectre of an international trade war looms and is due to start this Friday.

Donald Trump is due to slap as much as $34billion (£25 billion) of Chinese exports with 25 percent tariffs.

In response, China asked the EU, which is the world’s largest trading bloc, for an alliance against the US while promising to open up more of China’s economy to European competitors.

Chinese state media has promoted the message that the EU is on China’s side.

“They firmly believe that free trade is a powerful engine for global economic growth.”

But the EU rejected any idea of allying with China against Washington ahead of a Sino-European summit in Beijing on July 16-17.

A European diplomat said: “China wants the European Union to stand with Beijing against Washington, to take sides.

“We won’t do it and we have told them that.”