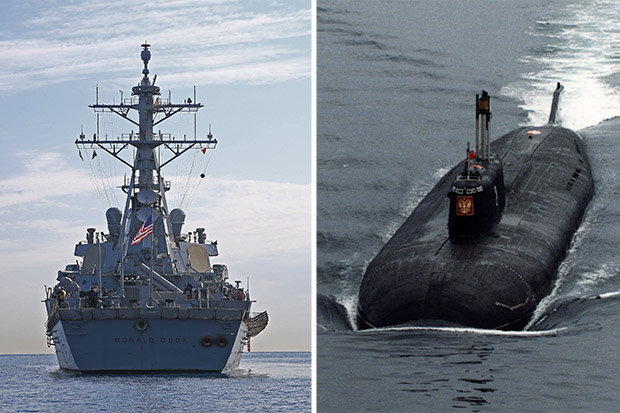 Masorin, who commanded the Caspian Flotilla between 1996 and 2002, warned US President Donald Trump to refrain from bombing Syria over the chemical attack.
Waging war is a “dangerous thing” for the US who live in a “completely different world” to Russia, whose Navy has “no fear”, he said on Friday.

His bellicose comments come after Trump warned Russia missiles “will be coming” in response to the chemical attack blamed on Syrian President Bashar al-Assad.

The USS Donald Cook, equipped with more than 60 Tomahawk missiles, is among a number of US Navy warships that could be involved in military action against Syria.

“It is unlikely that we will have to sink the Donald Cook,” Masorin told Russian TV channel Zvezda.

“Yet, a torpedo is a very effective weapon that causes considerable damage to a vessel.

“Clearly, we are going to deal with a lot of pressure, but war is a dangerous thing for the Americans in the first place.

“They live in a completely different world over there, but we have no fear, we are fed up with the Americans, they are like a burr in the saddle.”

Full article: Russian Navy chief threatens US warship near Syria with TORPEDO ATTACK: ‘We have no fear’ (Daily Star)

One response to “Russian Navy chief threatens US warship near Syria with TORPEDO ATTACK: ‘We have no fear’”