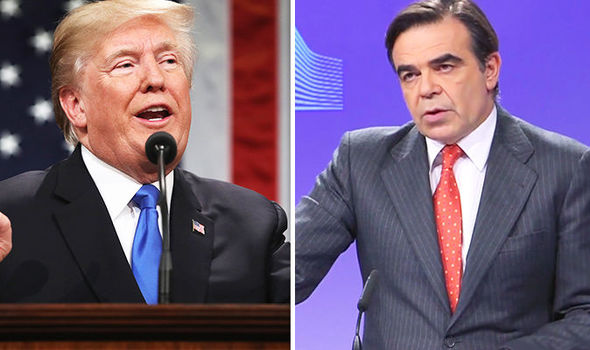 Mr Schinas said trade can and should be “win-win” as he responded to threats made by US President Donald Trump.

Speaking at a European Commission press conference on Monday, Mr Schinas said: “We also believe that while trade has to be open and fair it has also to be rules-based.

“The European Union stands ready to react swiftly and appropriately in case our exports are affected by any restrictive trade measures from the United States.”

Donald Trump said in an interview with Piers Morgan that he was frustrated with the EU’s trade policy.

President Trump accused Brussels of treating the US “very unfairly” when it came to trade.

He said that his many issues with the Brussels bloc could “morph into something very big from a trade standpoint.”

He said: “We cannot get our product in. It’s very, very tough. And yet they send their product to us — no taxes, very little taxes. It’s very unfair.”

He added: “The European Union has been very, very unfair to the United States. And I think it will turn out to be very much to their detriment.”

In response to the threat, the EU’s spokesman said: “For us, trade policy is not a zero-sum game, it is not about winners and losers.”