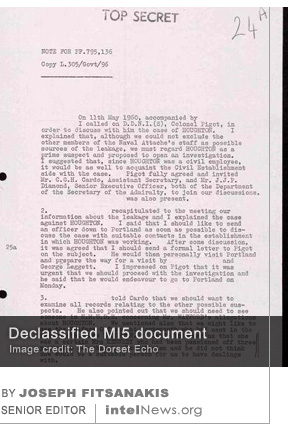 Files released on Monday by the British government reveal new evidence about one of the most prolific Soviet spy rings that operated in the West after World War II, which became known as the Portland Spy Ring. Some of the members of the Portland Spy Ring were Soviet operatives who, at the time of their arrest, posed as citizens of third countries. All were non-official-cover intelligence officers, or NOCs, as they are known in Western intelligence parlance. Their Soviet —and nowadays Russian— equivalents are known as illegals. NOCs are high-level principal agents or officers of an intelligence agency, who operate without official connection to the authorities of the country that employs them. They often pose as business executives, students, academics, journalists, or non-profit agency workers. Unlike official-cover officers, who are protected by diplomatic immunity, NOCs have no such protection. If arrested by authorities of their host country, they can be tried and convicted for engaging in espionage.

The existence of the Portland Spy Ring has been known since 1961, when British authorities arrested five people throughout England. Two of them were British citizens, Harry Houghton, a clerk at the Royal Navy’s Underwater Detection Establishment facility in Dorset, England, and his mistress, Ethel Gee. Their Soviet handler was Konon Molody, a Soviet intelligence officer who was posing as a Canadian, under the name Gordon Lonsdale. Also arrested was a married couple from New Zealand, Peter and Helen Kroger. But in reality they were Americans, whose real names were Morris and Lona Cohen, and had worked for Soviet intelligence since the late 1930s. Collectively, the five were referred in media reports as members of the Portland Spy Ring.

The newly declassified files about the spy ring were released by the Security Service, known commonly as MI5, Britain’s primary counterterrorism and counterintelligence agency. They reveal how British authorities managed to bust the Portland Spy Ring. According to the files, the initial tip-off came from the Central Intelligence Agency (CIA). The American agency had managed to recruit Michael Goleniewski, codename SNIPER, a Polish military counterintelligence officer, who led the technical office of Poland’s military intelligence. In the spring of 1960, Goleniewski told the CIA that Polish intelligence were running a British agent who was recruited while serving in the office of the naval attaché at the British embassy in Warsaw. The CIA shared the information with British intelligence, who soon identified the agent as Harry Houghton in Dorset. MI5 agents followed Houghton and his girlfriend, Ethel Gee, as they met with a successful Canadian businessman in London, Gordon Lonsdale (real name Konon Molody). Molody had grown up with a family member in California in the 1930s, and spoke fluent English. He had joined Soviet intelligence during World War II and sent to Britain posing as a Canadian. When he arrived there, in 1954, he established the KGB’s first known illegal residency in the British Isles.