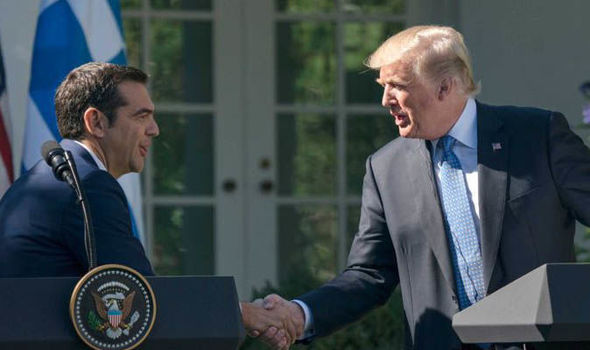 The two leaders met at the White House for cordial talks and among the topics for discussion were investments in Greek oil resources and Greece-based military bases as the relationship between the USA and Turkey becomes tense.

Standing alongside the Greek Prime Minister after their meeting, Mr Trump said: “The American people stand with the Greek people as they recover from the economic crisis that recently afflicted their nation.

The flow of US investment into Greece is taking on a new urgency in recent weeks with the administration looking shore up economic and defence ties with the NATO ally.

Greece is currently emerging from an 8-year financial crisis and is keen to attract US investors.

“To date, however, 50 million of proven reserves have been discovered. Major energy companies are lining up to tap the country’s hydrocarbon potential in the waters surrounding southern Crete and the Grevena region in northern Greece, close to the route of the Trans Adriatic Pipeline.”

Diplomatic sources have confirmed the leaders are focusing on investments and collaboration in defence.

The President said he had spoken to his Greek counterpart about a potential $2.4 billion to upgrade F-16 aircraft in Greece’s Air Force.

The US State Department approved the possible sale on Monday, and Mr Trump said his administration had informed Cogress of the potential sale.

Trump has previously spoken of his distain for the EU’s power over Greece, in 2012 he tweeted hat Greece should get out of the euro and go back to its own currency. He wrote: “They are just wasting time.”

The President also took another sideswipe at EU nations by praising Athens for being among the few NATO members to spend at least two per cent of gross domestic product on defence, something he was repeatedly criticised other nations for failing to do.

Those comments have been seen as an attempt by Mr Trump to forge a strong allience with a fellow NATO member at a time when US relations with Turkey crumble.

Full article: Donald Trump’s message to Greece: USA will INVEST in debt-ridden nation to save it from EU (Express)