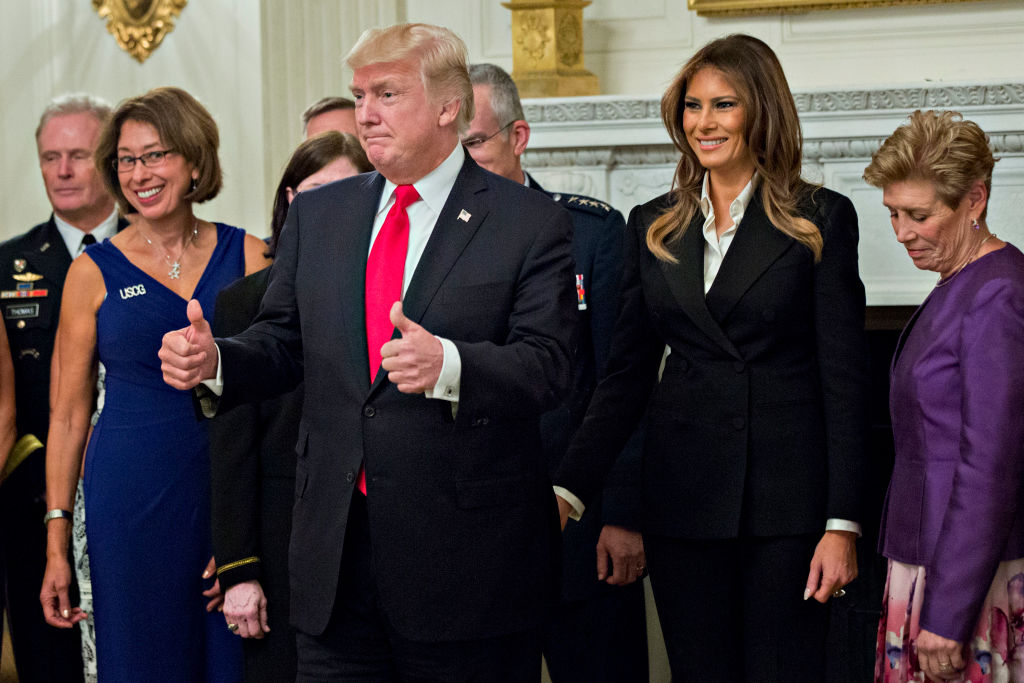 U.S. President Donald Trump and first lady Melania Trump pose for pictures with senior military leaders and spouses after a briefing in the White House on October 5, 2017. During the photo session, President Trump spoke of the “calm before the storm”. (Photo by Andrew Harrer-Pool/Getty Images)

Reporters continue scratching their heads about what President Trump meant when he spoke of the “calm before the storm” Thursday as he was hosting a dinner for military commanders and their spouses. It seems clear to me that he was sending a powerful message to North Korea and Iran: change your behavior now, or prepare to face new but unspecified painful consequences.

North Korea and Iran are taking the measure of President Trump to see how far they can push him and how much they can get away with. The North Koreans continue testing nuclear weapons and long-range missiles and threaten to launch a nuclear attack on America and our allies that could kills millions. Iran is likely engaging in activities that could contribute to the design and development of its own nuclear explosive device.

If these worrisome actions by the two rogue nations persist, there will be a storm. And as candidate Trump said during his campaign for the White House, he will not tell our enemies what kind of storm to expect — only that he will not allow current trends that endanger our national security and that of our allies to continue unabated.

The president must make some difficult decisions: whether to continue to rely on economic sanctions that don’t appear to be working against North Korea; and whether to refuse to certify Iranian compliance with the bad nuclear deal and demand that additional constraints be placed on the Islamic Republic’s dangerous and provocative activities.

President Trump faces an Oct. 15 deadline to decide whether to certify Iranian compliance with the nuclear agreement, which is designed to keep it from developing nuclear weapons for the next few years. News reports say he is expected to refuse to make that certification.

U.S. policy toward both Iran and North Korea is closely related, because we must prevent Iran from joining the nuclear club and becoming another, even more dangerous version of North Korea.

The sad reality is that even if Iran were to comply with the letter of the nuclear agreement, it will still be able to develop the capability to build up a vast nuclear arsenal within a relatively short time. This is the fundamental flaw of the agreement.

And Iran claims that the nuclear deal permits it to refuse to allow the International Atomic Energy Agency (IAEA) to inspect military facilities. This has led the IAEA to conclude that it cannot assure the world that Iran is not even now designing and developing a nuclear arsenal with missiles capable of delivering them to American allies in the Mideast and Europe, and soon the U.S. itself.

So President Trump cannot afford to wait and do nothing as Iran and North Korea grow ever stronger, ever more menacing and become greater and greater threats. He must do something — now. The nature of what is done, and what kind of storm it may be, is up to our enemies. I hope they choose wisely.

Full article: Trump’s ‘Calm before the Storm’ is a Message to North Korea and Iran (Gatestone Institute)