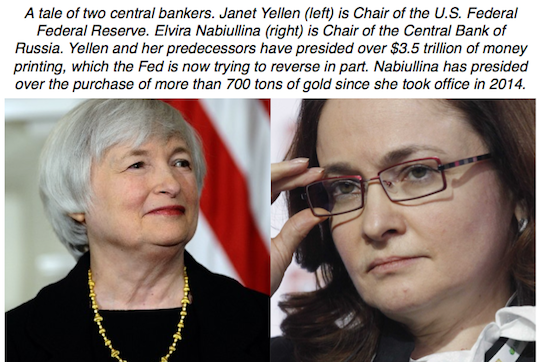 When you hear the name “Russia” you probably run for cover. Russia has been the subject of nearly continuous media coverage bordering on frenzy since the election of Donald Trump last November.

Russia allegedly hacked U.S. computer systems and email servers, rigged the election in favor of Trump, and colluded with the Trump campaign to defeat Hillary Clinton. Trump campaign officials met with Russian operatives and spies to coordinate all of this nefarious activity. Or so the story goes.

The truth is more complex. Russia certainly does run an around-the-clock hacking and spying operation aimed at any U.S. system they can penetrate. We do the same to Russia. It’s what national intelligence agencies do. No news there.

There may have been some “weaponization” of the hacked data through selective leaks to publishing outlets like Wikileaks. That allegation is less clear. Wikileaks has always insisted that their leaks did not come from Russia. There is some evidence to support the claim that the Hillary Clinton related leaks came from disaffected Bernie Sanders supporters. That truth may emerge later.

Trump campaign efforts to reach out to Russia between November 2016 and January 2017 did not have to do with “collusion.” They were a smart geopolitical move to align U.S. interests with Russia in advance of a confrontation with China about trade, currency, and North Korea.

Unfortunately, the Trump team consisted of amateurs like Jared Kushner who bungled the job. They played into the hands of Democrats who were waiting to pounce on the smallest sign of so-called collusion. This sequence combined with media bias has now poisoned the U.S.-Russia relationship.

Now, the confrontation with China is arriving right on schedule but the U.S. has no relationship with Russia to help back up our position. It’s two-against-one, and the U.S. is the odd man out — thanks to U.S. political dysfunction and the media.

The point in reciting this history is that it’s difficult for investors to separate the economic fundamentals of Russia from the media circus and political noise. If Russia were named “Volgastan,” and not involved in U.S. politics, its economic position would be one of the most attractive emerging markets stories in the world.

Let’s begin our independent analysis by reviewing the fundamentals.

Russia is the 12th largest economy in the world with about $1.3 trillion in GDP. That is slightly larger than Australia or Spain, and significantly larger than well-liked emerging markets economies such as Mexico, Indonesia, and Taiwan.

The fact is, in the next liquidity crisis, you won’t be hearing about Russian default. The U.S. and China are more likely to be in the eye of the storm.

Russia is the world’s second largest oil exporter (after Saudi Arabia) and the world’s largest exporter of natural gas. Russia is also the world’s third largest gold producer after China and Australia, and ahead of the United States.

From a geopolitical perspective, Russia is one of only three genuinely powerful countries in the world (along with the U.S. and China) despite media efforts to portray it as an inefficient economic backwater.

Still, there’s much more to the Russian economic analysis than the familiar story of an export and geopolitical powerhouse. In particular, Russia has engaged in one of the most aggressive gold accumulation operations since the U.S. in the 1920s.

Russian reserves are managed by the Central Bank of Russia, CBR. The CBR Chair since 2013 has been Elvira Nabiullina. Think of her as the “Janet Yellen of Russia,” but with a much different pedigree.

Nabiullina did not graduate from one of the Keynesian-monetarist hotbeds such as MIT or the University of Chicago. She graduated from Moscow State University and worked her way up through the Russian Ministry for Economic Development and Trade.

With that background, she has a much better feel for the dynamics of Russian growth and the Russian people than the so-called Western experts who rushed in to “fix” the Russian economy in the 1990s. Those experts ruined Russia and paved the way for the more authoritarian politics of Vladimir Putin.

To his credit, Putin has given Nabiullina independence and allowed her to manage reserves, interest rates, and capital outflows with a minimum of political interference. In 2017, The Banker, a British publication, named Nabiullina “Central Banker of the Year, Europe.”

Nabiullina’s greatest accomplishment is to increase Russia’s gold reserves by 700 tonnes since taking office. This gold has a market value of $32 billion at today’s prices. This is on top of the approximately 1,000 tonens of gold that Russia already had when Nabiullina became CBR Chair in 2013.

This is an extraordinary accomplishment considering that Russian reserves collapsed from about $525 billion to $350 billion during the oil price crash of 2014-2015. Today, Russia’s reserves are back up to a healthy $425 billion, recovering over 40% of the reserves lost in the oil price collapse.

Russia now has a gold-to-GDP ratio of almost 6% — more than three times the comparable ratio for the U.S. Russia is preparing for the day when a full-blown crisis of confidence in the U.S. dollar emerges. At that point, a new international monetary conference similar to Bretton Woods will be convened.

In such a scenario, gold will be a major determinant of the power of each participant in reshaping the international monetary system. Russia will have a prime seat at the table, while gold weaklings such as the UK, Canada, and Australia sit along the sidelines.

But, Russia is not solely dependent on oil for economic growth. The Russian economy is poised for strong growth from a diversified combination of exports, agriculture, and direct foreign investment.

What indicators am I using to support this positive fundamental analysis of the Russian economy?

The most important development is the diversification of the Russian economy to avoid exclusive reliance on energy exports.

Russia has revved up its export economy. These exports include arms sales to cash customers such as Iran and Turkey.

Russia is also harvesting a bumper crop of wheat both from Russia itself and parts of eastern Ukraine effectively dominated by Russia. These crops will be in high demand due to drought conditions in major Russian competitors such as Australia, Canada and the U.S.

Improvement in Russia’s trade surplus and reserve position will make it a magnet for direct foreign investment and global capital flows.

Having weathered the storm, Russia will be the main beneficiary as sanctions are gradually eased and as oil prices gradually recover.

And did I mention that Russia’s acquiring gold?

Full article: Russia’s on the Way Back (Daily Reckoning)