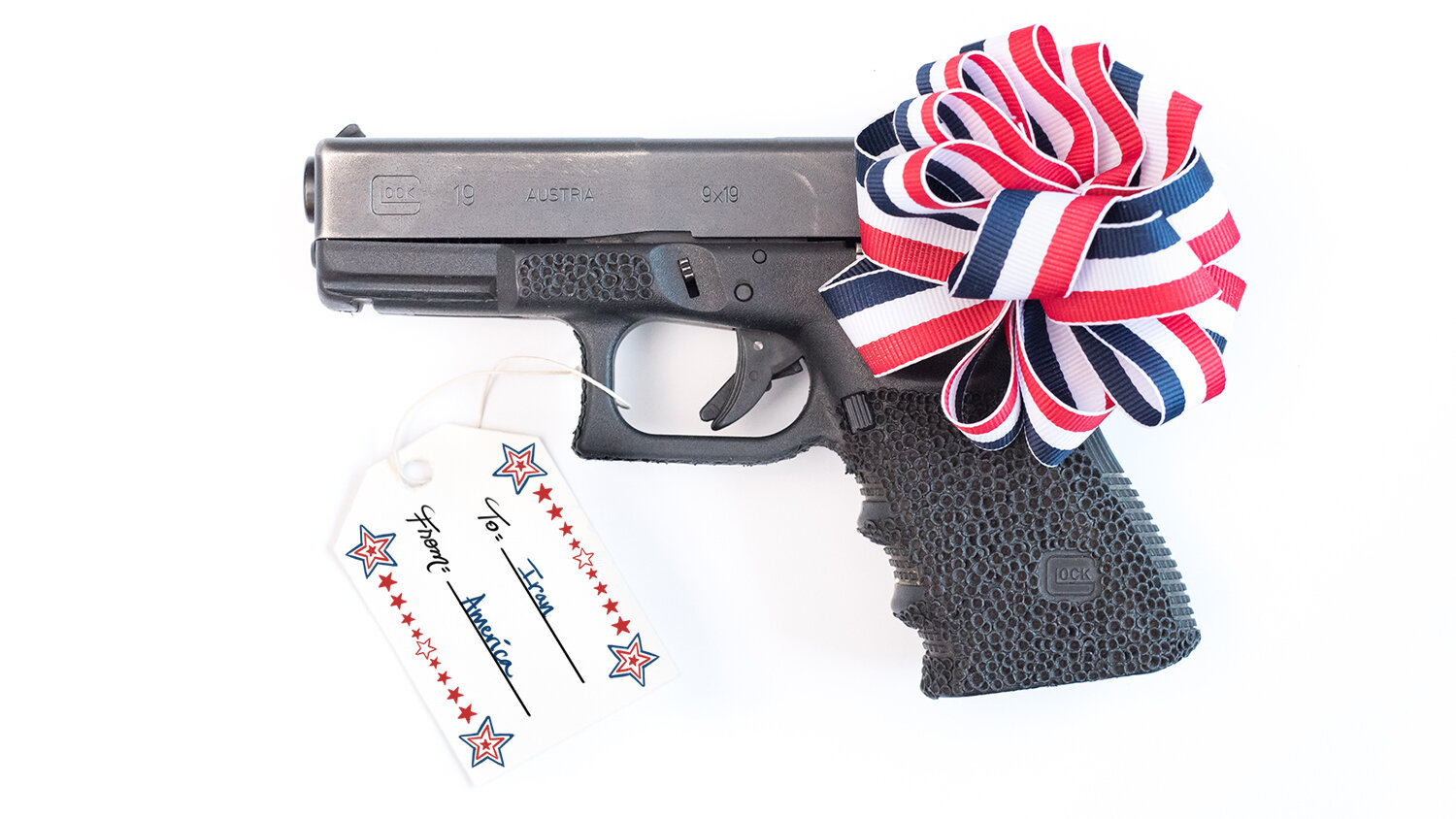 This prophecy, then, indirectly reveals the astonishing downfall of the United States even as it foretells the emergence of these two prophesied power blocs.

What is even more stupefying is that America today, which is on its way down and out, is actually pushing these two kings to become world powers!

Obama and the Mullahs

Even before his election in November 2008, Barack Obama used secretive back channels to assure Iran’s supreme leader that he would be a friend to the Islamic Republic. On June 4, 2009, in a landmark speech in Cairo, Egypt, he told the number one state sponsor of terrorism that, as far as he was concerned, the killing and maiming Iran had actively supported since the Islamic Revolution of 1979 was in the past. And Barack Obama wasn’t about to be “trapped” in the past.

Nothing would prevent Mr. Obama from extending America’s friendship.

So when Iran’s Green Movement rose up against the nation’s supreme leader just days after that speech in Cairo, Mr. Obama shamefully turned a blind eye to those who were seeking freedom from radical religious oppression, who were demanding democracy. He actually took aggressive steps to prevent a popular uprising from toppling Iran’s tyrannical regime.

From that point forward, through a series of foreign-policy decisions, Obama helped strengthen and embolden the Iranian king and its proxies.

This push to empower Iran culminated in the coronation ceremony symbolized by the Iran nuclear deal. The Joint Comprehensive Plan of Action went into effect on Jan. 16, 2016. That same day, President Obama signed an executive order lifting sanctions on Iran, releasing its valuable assets, handing over terrorists and tens of billions of dollars, and clearing the path for Iran to build a nuclear bomb.

At the time, we wrote that the United States had effectively crowned Iran as “king” of the south!

America now has a new president, who is doing everything he can to help another nation amass more power: Germany. As National Interest noted on May 28, President Donald Trump is pushing German Chancellor Angela Merkel to create a “German superpower.” It may not seem like it, but this is even more dangerous than enabling the terrorist-sponsoring, nuclear-hungry Islamic Republic of Iran!

During his trip to Europe in May, Mr. Trump made some remarkable statements about Germany and the European Union. In Brussels on May 25, he berated nato members for not paying their fair share into the military alliance. This has been one of the most consistent refrains of his presidency so far. In his first meeting with Chancellor Merkel in March, President Trump lambasted Germany, saying in a tweet that it “owes vast sums of money to nato & the United States” because of its lack of military spending.

If Germany increased its defense spending to 2 percent of its gross domestic product—which is what nato nations have agreed to and what Mr. Trump wants to hold Germany accountable for—it would nearly double the amount it spends on its military. It would spend even more on defense than Russia! It would also mean that Germany, which is already Europe’s biggest economy, would have Europe’s most powerful military.

Trump administration officials are not only aware of this, they want this. One of this administration’s major foreign-policy priorities so far is to force Germany to take the lead in Europe, economically, politically and militarily.

Not surprisingly, some European nations are unsettled by this plan. Politico wrote on May 24, “Any quick major muscle movement by Germany has repercussions across the Continent and awakens old ghosts.”

America’s commitment to nato is receding, putting the alliance in jeopardy. Without America’s immense military to rely on in the event of an attack, European nations will have no choice but to look to Germany for protection.

“There is zero hope for Poland without tens of thousands of German troops fighting on Polish soil,” Zeihan said. Yet when German troops enter Poland, he explained, they don’t tend to leave! “Every time the Germans have armed, the result has been a broad-spectrum European war,” he continued. “It is far too soon to call that inevitable, but unless the Germans prove comfortable with Russian troops within a couple hundred miles of Berlin, the era of German pacifism is nearly over.”

Which nation is most responsible for ending this era of German pacifism? A nation that fought against German imperialism in two world wars: the United States of America.

While President Trump is pushing Germany to step up militarily, he has also made many statements that have angered German leaders in politics and business.

“The Germans are bad, very bad,” he told a meeting of EU leaders on May 25, according to Der Spiegel. ”See the millions of cars they are selling to the U.S.?” he asked. He said the trade relation was terrible and that the U.S. would stop it!

On May 30, immediately after his European tour, the president doubled down on his criticism of Germany with this tweet: “We have a massive trade deficit with Germany, plus they pay far less than they should on nato & military. Very bad for U.S. This will change.”

German politics have “long included an anti-American strain, seen in massive demonstrations against nato’s stationing of medium-range nuclear missiles in the 1980s and in then Chancellor Gerhard Schröder’s standoff with George W. Bush over the Iraq War in 2003,” wrote the Financial Times. “Such tensions boiled up after Edward Snowden’s leaks about mass surveillance by the U.S. security services, and claims that the U.S. tapped Ms. Merkel’s personal mobile phone. Mr. Trump’s broadsides have intensified that anti-U.S. tendency” (op cit).

Considering this backdrop, it’s little wonder that Merkel chose to criticize Trump at a campaign speech on May 28. Europeans, she said, must take matters into their “own hands.” She said the “times in which we could rely fully on others [a clear reference to the U.S. and Britain] are somewhat over.”

“This is what I experienced in the last few days,” she added, removing any doubt that this criticism was a result of her recent meeting with Mr. Trump.

Former U.S. envoy to nato Ivo H. Daalder said, “This seems to be the end of an era, one in which the United States led and Europe followed.”

With America on the way out, Germany is moving fast “to fashion a Franco-German axis that will pursue a common economic and military path,” wrote the National Interest. Mr. Trump is “emboldening Germany to become the superpower of Europe and inevitably it will pursue what it considers its own interests” (op cit).

It concluded with what is prophetically an electrifying statement: “Until now, the core relationship in American foreign policy in Europe has been with Germany. That tie appears not simply to be fraying but on the verge of snapping. It will be no small irony if Trump has impelled Europe to transform itself into a unified great power.”

We are witnessing a seismic shift in transatlantic relations that is paving the way for the fulfillment of Daniel 11:40!

“The United States is determined, now, to let nothing stand in the way of building up a rearmed, independent Germany,” Mr. Armstrong wrote in 1952. “This will be the heart and core of the united Europe that will revive the Roman Empire.” In 1961, he wrote that this seventh and final resurrection of the Holy Roman Empire had been “proposed, encouraged, aided and abetted” by the United States!

The U.S. literally rebuilt Germany from the ground up. It then pushed for the creation of the European Union. Mr. Armstrong called the project a “made in the U.S.A.” superpower to be dominated by Germany. America, of course, believed that a union of many European states would help suppress Germany’s dominant disposition.

Plus, there was the nato alliance. As Lord Hastings Ismay famously quipped after the coalition formed, it was designed to “keep the Russians out, the Americans in and the Germans down.”

“The United States made a simple bargain with Western Europe: You no longer need to maintain a world-class army; instead, we will protect you,” we wrote in 2014. “This deal helped bring an extraordinary level of stability and tranquility to a part of the world that has repeatedly convulsed with astonishing violence and destruction throughout its history” (Trumpet, January 2014).

That time has ended. America has helped to build a European superpower. And now President Trump wants to get the Americans out and push the Germans to dominate.

“Do we really want to see a United Europe led by Germany?” Charles Krauthammer asked on May 30. “Last time that happened it didn’t really turn out well. … There is a reason why every president since Truman has wanted to tie Europe to the United States. … We may rue the day when the Germans are not tied down by transatlantic bonds.”

This is exactly what Mr. Armstrong warned about as early as the 1940s!

A Break in the NATO Alliance

It is breathtaking to consider how much detail the Bible prophesies about these days we are living in! Ezekiel 23 speaks of Germany as America’s “lover.” My father explained the meaning of this relationship in his 2014 article “The Significance of Germany’s Break From America.” He wrote, “Since World War ii, the U.S. has snuggled up to Germany. It has actually done a lot to help Germany become the number one power in Europe! … In 2009, America’s ambassador to Germany called the Washington-Berlin partnership ‘the most important relationship of the past 60 years.’ For many years now, America has been encouraging Germany to take on a stronger global leadership role and even to strengthen its military might.”

But Ezekiel 23, he wrote, shows “what will become of America and Britain because of this tryst.” The adulterous relationship is prophesied to end in a massive double cross that brings down our nations!

“Germany was prophesied to break away from America, and it is happening before our eyes,” he wrote. “But the animosity we see today is only the smallest beginning!”

That was from the October 2014 Trumpet, in the wake of a spying scandal in America’s National Security Administration. Already it is clear that animosity was merely a small beginning. “You can know absolutely where the German-American relationship is heading,” he wrote. “Events right now are leading toward a terrifying end, and you can recognize it if you pay attention.”

America’s “loving” ally since the end of World War ii is fast becoming its greatest enemy. And America is largely responsible for creating this Frankenstein nightmare, in the same way it has empowered the radically Islamic king of the south.

The Daniel 11:40 clash is fast approaching! The king of the north and king of the south have been identified. Anyone watching and praying can see that these kings are rising rapidly! And America, ironically and shamefully, is determined to let nothing stand in the way of rebuilding and rearming them!