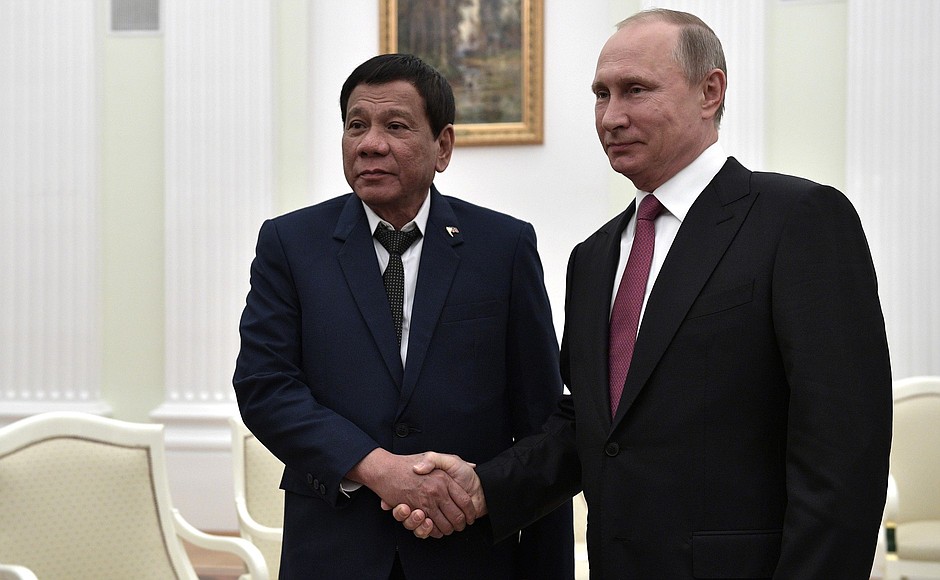 On May 23, Philippine President Rodrigo Duterte met with Russian President Vladimir Putin in Moscow. However, Duterte had to suddenly return back to Manila, due to a terrorist attack that hit the southern island of Mindanao. Nevertheless, his ministers signed close to $1 billion worth of business deals with Russian firms.[1] The Philippines and Russia have also signed an Agreement on Defense Cooperation. The defense cooperation will expand “exchanges in terms of training, seminars and best practices between the two countries, with the end to develop relations in the field of military education, including military medicine, military history, sports, and culture as well as experiences in consultation, observer participation in military training exercises, and military port calls.”[2]

During his airport departure speech, before leaving for Moscow, Duterte said: “Russia is a country that we must work with. There are opportunities for cooperation that cannot be ignored. With its geographic footprint in the Asia-Pacific region and strategic interests in the region, a positive engagement is required to find areas of synergies and interests.” Duterte then added: “It is my hope that this official visit will lay the firm basis for a robust, comprehensive and mutually-beneficial Philippine-Russian partnership, founded with a shared aspiration, sovereign equality, and pragmatism. There is room for growth. There is room for positive change.”

Duterte also stressed that Russia should not be relegated to the margins of Philippines diplomacy: “Our dependence on traditional partners [i.e. the U.S.] has limited our room to maneuver in a very dynamic international arena. This is strategic oversight that has led to many missed opportunities for our country. I am determined to correct this.” He then added: “My administration will give Philippines-Russia relations the importance commensurate its full potential. We will push for pragmatic engagement in the politico-security sphere, increased economic cooperation and enhanced cultural and people-to-people exchanges. This is a concrete expression of this deliberate policy decision.”[3]

The Philippine media reported that during the visit Russia asked the Philippines to submit “a shopping list of defense equipment,” after Duterte urged Russian Putin to provide him with a loan to buy weaponry.[5] Foreign Affairs Secretary Alan Cayetano said: “The response of the Russian Federation through President Putin was very, very generous. So they said, well, we have the framework in place through our agreements to cooperate… They have showed us what is available to us. I’m not at liberty now to discuss that…but they are awaiting our proposals.” He then added: “It’s nothing new for the Russian Federation to lend a helping hand to countries that are their friends.” Cayetano also said the loan may be used not only for arms purchases but for acquiring modern equipment to help the Philippine police and military fight terrorists. “You know, they’re suffering… Sometimes, the [Islamist terrorist group] Abu Sayyaf have better equipment than they do,” he added.[6]

Commenting on the goals of the visit to Moscow, Philippine Ambassador to Russia Carlos Sorreta said that the acquisition of weapons from Russia is different from forging a strategic defense alliance. Sorreta said: “The arms will be sold and they trust us to use it properly. I have always believed that our brave men and women in uniform should not be going into battle carrying arms attached to strings that run all the way to Washington.” The ambassador actually stressed that, unlike the U.S., Russia does not attach political conditions to the Philippines in the weapons’ sale.[7]

The following are excerpts from an article, titled “Rodrigo Duterte In Russia: Arms Deal On The Way?,” by Valdai Club expert Viktor Sumsky, Director of the ASEAN Center at the Moscow State Institute of International Relations of the Russian Foreign Ministry:[8]

“After the election in May 2016, the new president of the Philippines Rodrigo Duterte announced, that his country would move away from a one-sided orientation toward the U.S., drawing closer ties with China and Russia. Russia, for its part, is interested to widen the number of real partners in Asia, which increases range of opportunities related to trade, economic, defense and investment cooperation, exchanges in education, science and culture. Over the past year, Russian-Philippine bilateral contacts have significantly increased in various areas, which did not happen before in the history of relations between the two countries.

“The Philippine side has more than once explained that the future agreement on cooperation with Russia in the field of defense does not mean the establishment of a military alliance. From the technical point of view the military equipment of the Philippine army is rather obsolete. The Philippines stands behind most of its ASEAN [Association of Southeast Asian Nations] partners – and this happened after decades of the military and political embrace from the United States.

“The Filipinos got from the former colonial power mostly morally obsolete and worn-out weapons. Against this background they showed interest to the less expensive but modern and reliable production of the Russian military-industrial complex – especially since many of the Russian weapons have been shipped to the ASEAN countries, that are partners of the Philippines – Vietnam, Indonesia, Cambodia, Laos, Malaysia, Myanmar.

“By the way, it is not the first time the Filipinos wish to buy Russian weapons: for example, this issue was raised during the official visit to Moscow in September 1997 by then-President Fidel Ramos, but at that time ‘the stars did not converge.’

“The whole world already knows that President Duterte has a ready tongue when someone comes to teach him how to rule a sovereign state, what needs to be done and what not to do. After a memorable episode with Barack Obama, there are no other people who want to “instruct” Rodrigo Duterte, and Donald Trump communicates with his Philippine colleague quite properly. If nothing extraordinary happens, these two leaders will find a common language, and the relations of the Philippines with the U.S. will develop in a proper way.”