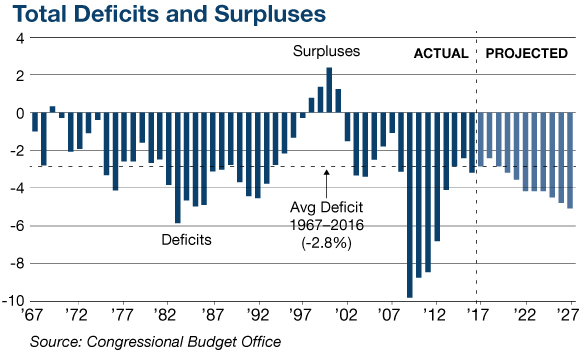 James Rickards writing for the Daily Reckoning today looks at the important ‘next signal to watch’ and explains that Trump and his advisors believe they can avoid a debt crisis through higher than average growth.

Rickards warns that while this is “mathematically possible”, it is “extremely unlikely”:

The Trump team hopes for nominal deficits of about 3% of gross domestic product (GDP) and nominal GDP growth of about 6% consisting of 4% real growth and 2% inflation. If that happens, the debt-to-GDP ratio will decline and a crisis might be averted.

This outcome is extremely unlikely. As shown in the chart below, deficits are already over 3% of GDP and are projected by CBO to go higher. We are past the demographic sweet spot that Obama used to his budget advantage in 2012–2016 (As I noted HERE – Obama Has Tied Trump’s Hands).”

Rickards explains in detail the challenges facing the U.S. in terms of the fiscal budget, growth of real GDP, debt to GDP ratios, inflation and how deficits are set to soar.

He points out how Trump will soon appoint five people “to the Fed board of governors in the next 16 months, including a new chair and two vice chairs” and how gold investors should consider these appointments in terms of readjusting their allocations to physical gold:

“If he appoints doves, that will be the signal that inflation in the form of helicopter money and financial repression is on the way. That will also be the signal to move out of cash and increase our allocation to gold beyond the current 10% level.

If Trump appoints hawks to the board, that will be a signal that his team does not understand the problem and is relying on overoptimistic growth assumptions. In that case, we could expect a recession, possible debt crisis and strong deflation. That is a signal to keep our 10% gold allocation as a safe haven, but also buy Treasury notes in expectation of lower nominal rates.

We are watching for a signal on Trump’s nominations to the Fed board. The first three should be announced soon. Once the names and their views are known, the die will be cast.”