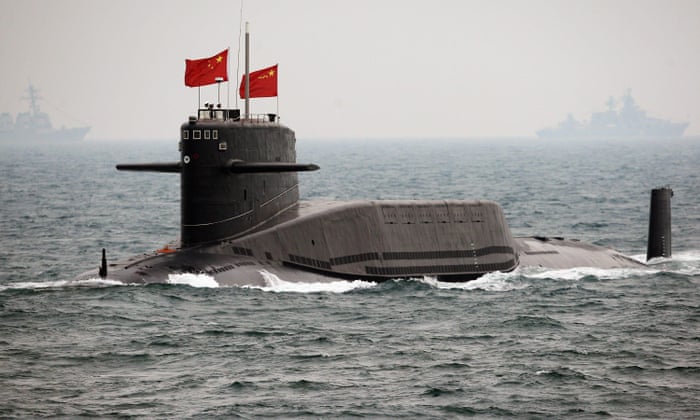 The Chinese military is poised to send submarines armed with nuclear missiles into the Pacific Ocean for the first time, arguing that new US weapons systems have so undermined Beijing’s existing deterrent force that it has been left with no alternative.

Chinese military officials are not commenting on the timing of a maiden patrol, but insist the move is inevitable.

They point to plans unveiled in March to station the US Thaad anti-ballistic system in South Korea, and the development of hypersonic glide missiles potentially capable of hitting China less than an hour after launch, as huge threats to the effectiveness of its land-based deterrent force.

A recent Pentagon report to Congress predicted that “China will probably conduct its first nuclear deterrence patrol sometime in 2016”, though top US officers have made such predictions before.

China has been working on ballistic missile submarine technology for more than three decades, but actual deployment has been put off by technical failures, institutional rivalry and policy decisions.

Until now, Beijing has pursued a cautious deterrence policy, declaring it would never be the first to use nuclear weapons in a conflict and storing its warheads and its missiles separately, both strictly under the control of the top leadership.

Warheads and missiles would be put together and handed over to the navy, allowing a nuclear weapon to be launched much faster if such a decision was taken. The start of Chinese missile patrols could further destabilise the already tense strategic standoff with the US in the South China Sea.

The two countries’ navies have also come uncomfortably close around disputed islands in the same region, and the chance of a clash will be heightened by cat-and-mouse submarine operations, according to Wu Riqiang, an associate professor at the School of International Studies at the Renmin University in Beijing.

“Because China’s SSBNs [nuclear missile submarines] are in the South China Sea, the US navy will try to send spy ships in there and get close to the SSBNs. China’s navy hates that and will try to push them away,” Wu said.

Full article: China to send nuclear-armed submarines into Pacific amid tensions with US (The Guardian)